Mill Hill
For other places with the same name, see Mill Hill (disambiguation).

Mill Hill is a place in the London Borough of Barnet. It is a suburb situated 9 miles (14.3 km) north west of Charing Cross. Mill Hill was formerly in the historic county of Middlesex until it was absorbed by London. Mill Hill consists of several distinct parts: the old original centre based around Mill Hill Village; the later-developed but now main hub of the area at Mill Hill Broadway, and the area around Mill Hill East. A further area at the western edge of the suburb, The Hale, is on the borders of Mill Hill and Edgware, and is partly in each.

The area's name was first recorded as Myllehill in 1547 and appears to mean "hill with a windmill".[1] However, there is no evidence that a mill ever existed here. Mill Hill Village is the oldest known inhabited part of the district, a ribbon development along a medieval route called 'The Ridgeway'. It is thought that the name 'Mill Hill' may be derived from a mill on The Ridgeway, built on an area of open ground (now a park) known as The Mill Field. The village is bounded on the north and the south by Green Belt land, and its High Street, at 100 yards, is the shortest in London. The area's proximity to the city made it popular as a country retreat from the 17th century onwards, and large houses and quaint cottages survive. William Wilberforce (MP, and abolitionist of the slave trade) and Sir Stamford Raffles (founder of colonial Singapore) both briefly resided here, the former being the patron of Mill Hill’s first church, Saint Paul’s. In 1960 five shops existed in the Village (Griffin's sub-Post Office, The Blenheim Steps (Mill Hill School tuck shop), Cook & Son (sweets and groceries), Hawes Brothers (grocers) and Vincett's (butchers) but although the buildings survive, they have all been converted into private houses. As of February 2011, the only places in Mill Hill Village where money can be spent are The Three Hammers and Adam & Eve pubs and Belmont Farm (which includes the Waffle Café).

Inglis Barracks at Mill Hill East which was the home of the Middlesex Regiment between 1905 and 1962. The 1941 reopening of the railway station, under war-time conditions, was to allow easy access to the barracks. As military needs have changed land has been progressively sold. The army postal depot was located here before moving to Northolt. In 1988, a 23-year-old soldier Michael Robbins was killed and nine others were injured by an IRA bomb blast.

Along Partingdale Lane is Seafield House, now a private home, but originally a nuclear bunker, designed to protect the 'London North Group' emergency regional government between (approx.) 1951 and 1958.

Mill Hill was part of the ancient civil parish of Hendon within the historic county boundaries of Middlesex. Mill Hill as part of Municipal Borough of Hendon was merged into the London Borough of Barnet in Greater London in 1965.[2] Mill Hill is one of 21 electoral wards in the borough. This ward has 3 out of the 63 seats on the Barnet Council.[3]

Mill Hill was in the parliamentary constituency of Hendon which was created in 1918. This lasted until 1945 when the constituency was split in two, Mill Hill in Hendon North. In 1997, the Hendon constituency was recreated. From then until he lost his seat to the Conservatives in the 2010 General Election, Hendon has been represented in the House of Commons by the Labour MP, Andrew Dismore.[4] 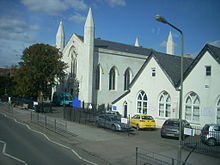 The village is a ribbon development along The Ridgeway. It has green belt either side.

"Partingdale" and "Burtonhole" form a distinct valley north of The Ridgeway. North is Folly Farm and Folly Brook, a tributary of the Dollis Brook, running west to east. Between The Ridgeway and Folly Brook are the National Institute for Medical Research, Burtonhole Farm, a garden centre called Finchley Nurseries, and several sports grounds.

Arrandene Open Space and Featherstone Hill is a large open space which is bordered by Wise Lane, Wills Grove, Milespit Hill and The Ridgeway. While there are many open spaces in the area, Arrandene is unique because of its many open fields, meadows and woodland. The open fields were originally hay meadows which provided feed for the horses pulling carriages north to Barnet and beyond.

There is a non-denominational Mill Hill Cemetery, formerly known as the "Paddington District Cemetery". The 1960s pop singer Billy Fury is buried there, and there are also some Dutch war graves. To the southwest is a small suburban district called "Poets' Corner", and to the north an old estate, now a nature reserve, Moat Mount Open Space. 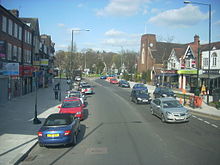 The modern-day centre of Mill Hill is at Mill Hill Broadway (previously known as Lawrence Street). This is a suburban district which developed from the 1890s onwards, and especially in the early part of the 20th century, after the arrival of the Midland Railway station in 1868. The Broadway itself is now an important local retail area with numerous shops and cafes. 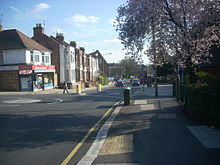 The United Kingdom / Carl Zeiss / Bausch & Lomb Optical Works was established at Mill Hill East in 1912 and demolished in about 1990, to be replaced by a large building owned by the Jehovah Witnesses, to complement their nearby Watchtower House built on the site of the former Bittacy House.

1930 OS map, showing Mill Hill to the east and in the centre, and Edgware to the west. The east-west railway line to the west of Mill Hill East station, on the right, was completely closed in 1964, and some sections of the track bed have since been built on. Inglis Barracks is at the top-right.

Mill Hill Broadway station is situated off The Broadway. (It is the top red circle, in the middle above.) The station is operated by First Capital Connect, located on the Midland Main Line as part of the Thameslink service. There are regular trains to St. Albans and Luton Airport to the north, and West Hampstead (8 minutes) and St. Pancras International (17 minutes) to the south, with most services running through central London and serving Farringdon, City Thameslink, Blackfriars, and beyond. It is in Travelcard Zone 4. The station platforms are being lengthened from eight to twelve carriages, to cope with longer Thameslink Programme trains.

The area was also served by another smaller station, Mill Hill (The Hale), opened by the Edgware, Highgate and London Railway in 1867, but passenger services ended in 1939, and freight traffic in 1964.

Mill Hill East station, situated off Bittacy Hill, is on the High Barnet branch of the Northern Line, and is the only station of the branch line from Finchley Central station. (It is the right-hand red circle above.) The normal off-peak service is four trains an hour to and from Finchley Central, but through trains are provided during peak hours, and when the line is disrupted by engineering works. The station was opened in 1867 by the Edgware, Highgate and London Railway, which also built the attractive Dollis Brook Viaduct to the east of the station. In 1935, plans were announced to modernise the railway, as part of the London Transport New Works Programme. Work was started, only to be cut short by World War II. All steam passenger services ended in September 1939, but the electrification of the line from Finchley Central tube station to Mill Hill East was completed, and that section reopened, as part of the Northern line, in 1941.

After the war, plans to complete the modernisation and restart passenger services between Mill Hill East and Edgware were abandoned in 1950. Steam freight trains continued to run between Finchley and Edgware until 1964, and the track beyond Mill Hill East was lifted the following year. Although partly built over, including by the M1 motorway, most of the old track bed has become a footpath, and decaying 1930s concrete infrastructure, never used, can still be seen.

The A1 and A41 converge as they enter Mill Hill at Fiveways Corner, this section is known as the Watford Way. The dual carriageway passes through Mill Hill, and the routes diverge at Apex Corner (officially Northway Circus). The M1 motorway was built through the western part of Mill Hill in 1967. There is a disused southbound exit slip road which passes under the Watford Way and which covers part of the old railway between Mill Hill East and Edgware Town.

Mill Hill East has been designated by the Mayor of London in his London Plan as a 'proposed area of intensification', in and around the Inglis Barracks site. As a result, Barnet Council designated the 'Mill Hill East Area Action Plan' (AAP) and carried out public consultation events. An at-times noisy 'examination in public',[5] to test the ‘soundness’ of the Council's submitted AAP proposals, was held in October 2008, conducted by the Planning Inspectorate, and the subsequent report broadly agreed with the Council's plans.

Representations were made to the Planning Inspectorate to reopen the railway line from Mill Hill East station to the west.[6]

A small victory for local protesters was that the report reaffirmed that a local closed road, Sanders Lane, would not be reopened for traffic, if only because the road was outside the AAP boundary (this had already conceded by the council) and would need separate consideration. However, speakers at the enquiry drew attention to the 'co-incidence' that a collector road proposed in the AAP[7] happened to meet the main road (Bittacy Hill) exactly opposite the short section of Sanders Lane still open to traffic. They suggested to the inspector that it was no coincidence at all, but the matter was left unresolved. The inspector stated in his report of December 2008:[8]

The amended AAP was formally adopted by the Council on 27 January 2009.[9] 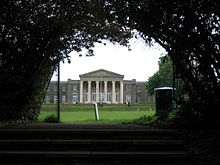 In 1749 the botanist Peter Collinson inherited an estate which is now part of Mill Hill School, here he created a botanical garden.[18] The lexicographer James Murray started work on the first Oxford English Dictionary in 1879, whilst teaching at Mill Hill School. He had a building built in the school grounds to house the quotation slips and his small editorial staff. Murray called this building his scriptorium, when the project moved to Oxford the building was used by the school as a reading room.[19]

University of London Observatory is a teaching astronomical observatory which is part of the Department of Physics and Astronomy at University College London. It is situated on the A41 Watford Way, southeast of The Broadway. The Observatory was opened on 8 October 1929 by the Astronomer Royal Frank Watson Dyson. In 2009, student astronomers at the observatory tracked the extrasolar planet HD 80606 b and for the first time accurately calculated its size.[21]

The National Institute for Medical Research is a large medical research facility situated on the Ridgeway. Researchers at the Institute have, amongst other achievements, developed liquid and gas chromatography, discovered interferon and also discovered the sex determining gene SRY.[22]

There are several religious institutions along the Ridgeway, including:

Veolia Water Central Limited formerly Three Valleys Water supplies Mill Hill's water.[23] EDF Energy Networks is the Distribution network operator licensed to distribute electricity from the transmission grid to homes and businesses in Mill Hill. On Partingdale Lane there is a large electrical station, built in 1961. The station is served by very high voltage cables underground along Totteridge Valley. The proposed above-ground pylons and cables were rejected after a high-profile residents' campaign. British Gas had a large gasworks at Mill Hill East with two Gasometers, now replaced with housing and shops.

The racing driver Graham Hill lived at Mill Hill for much of his adult life. The botanist Peter Collinson and the English traveller Celia Fiennes. The founder of Singapore Sir Stamford Raffles, the abolitionist William Wilberforce, and the parliamentarian John Wilkes[24]. In 2010 The X Factor contestants took up residence.[25]