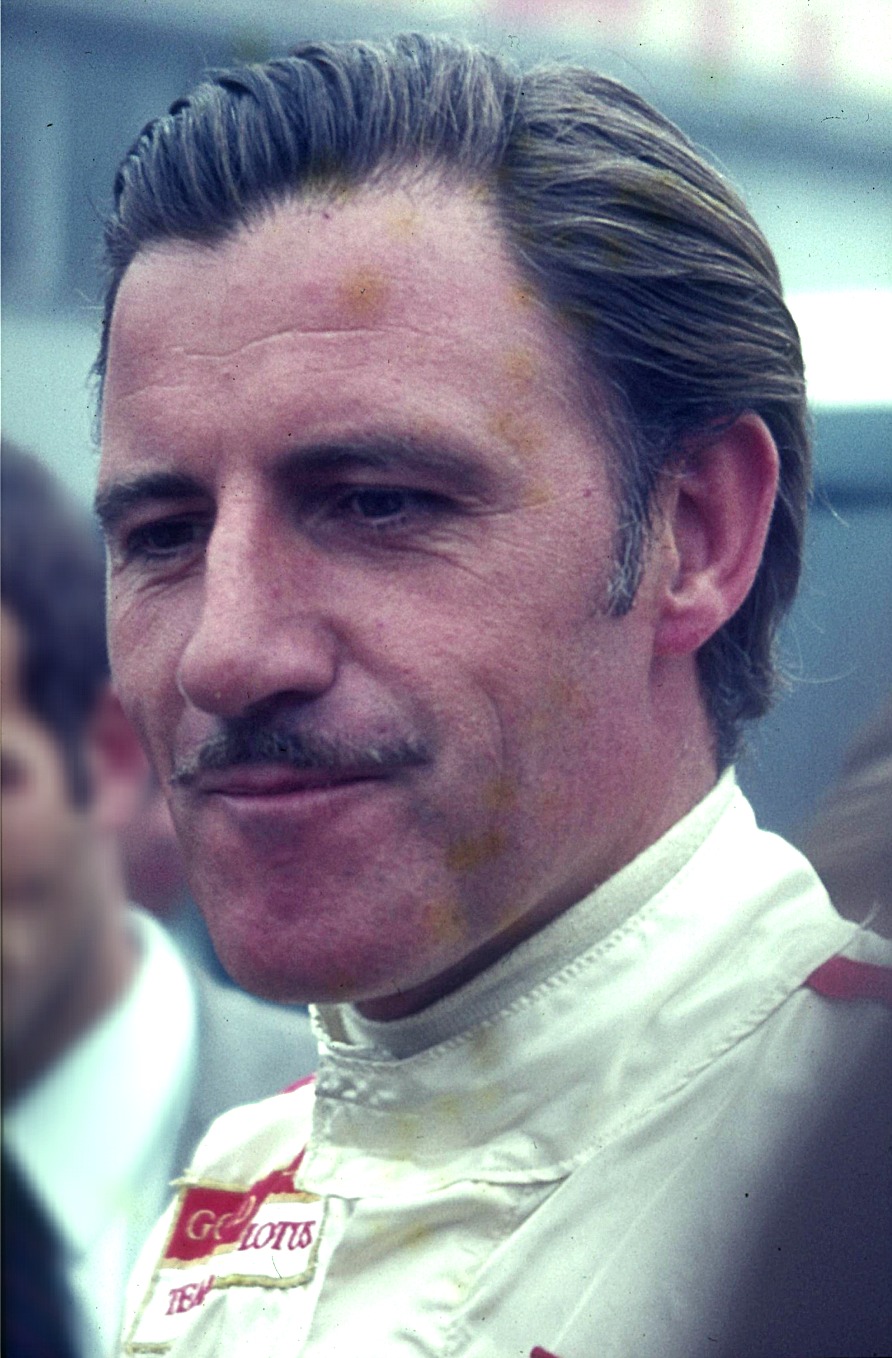 Norman Graham Hill (, – , ) was a British racing driver and two-time World Champion. He was born in , .

Graham Hill is the only driver to win the so-called "".

After serving in the as an , Hill re-joined Smiths Instruments. He had been interested in motorcycles but in 1954 he saw an advert for the Universal Motor Racing Club at offering laps for 5 shillings. He made his debut in a Cooper 500 car and was committed to racing thereafter. Graham joined as a mechanic soon after but quickly talked his way into the cockpit. The Lotus presence in Formula One allowed him to make his debut at the , retiring with a halfshaft failure.

In 1960, Hill joined BRM, and won the world championship with them in 1962. Hill was also part of the so-called 'British invasion' of drivers and cars in the Indianapolis 500 during the mid-1960s, triumphing there in 1966 in a Lola-Ford.

In 1967, back at Lotus, Hill helped to develop the with the new -V8 engine. After team mates and were killed in early 1968, Hill led the team, and won his second world championship in 1968 . The Lotus had a reputation of being very fragile and dangerous at that time, especially with the new aerodynamic aids which caused similar crashes of Hill and at the . A crash at the broke his legs and interrupted his career.

Upon recovery Hill continued to race in F1 for several more years, but never again with the same level of success. , believing Hill was a spent force, placed him in 's team for 1970, sweetening the deal with one of the brand-new cars. Although Hill scored points in 1970 he started the season far from fully fit and the 72 was not fully developed until late in the season. Hill moved to for 1971-2; his last win in Formula One was in the non-Championship International Trophy at Silverstone in 1971 with the "lobster claw" BT34. But the team was in flux after the retirements of and then 's sale to ; Hill did not settle there.

Hill was known during the latter part of his career for his wit and became a popular personality - he was a regular guest on television and wrote a notably frank and witty autobiography when recovering from his 1969 accident, Life At The Limit.

Hill was involved with four films between 1966 and 1974, including appearances in Grand Prix and , in which he appeared as a helicopter pilot. [ [http://movies.msn.com/movies/movie.aspx?m=503291&mp=c Caravan to Vaccarès: Cast & Crew] "movies.msn.com." Retrieved on , .]

Although Hill had concentrated on F1 he also maintained a presence in throughout his career (including two runs in the car at Le Mans). As his F1 career drew to a close he became part of the sports car team, taking a victory in the with . This victory completed the so-called "Triple Crown" of motorsport which is alternatively defined as winning either:
* the (won by Hill in 1966), the (1972) and the (1963, 1964, 1965, 1968, 1969), [cite web|url=http://www.usgpindy.com/news/story.php?story_id=1417|title=Points Race Stays Tight; Montoya Joins Elite Company With Victory|author=Dan Knutson|accessdate=2007-12-03|date=2003-06-03] [cite web|url=http://intakeinfo.com/automotive/monaco-grand-prix-glitz-draws-rising-stars.html|title=Monaco Grand Prix Glitz Draws Rising Stars|author=Henri Boulanger|publisher=IntakeInfo.com|accessdate=2007-12-05] or
* the Indianapolis 500, the 24 Hours of Le Mans and the World Championship (1962, 1968). [cite web|url=http://www.lastingtribute.co.uk/famousperson/hill/2601501|title=Tribute to Graham Hill|publisher=lastingtribute.co.ok|accessdate=2007-12-05] [cite book|title=The Other Side of the Hill|author=Bette Hill with Neil Ewart|publisher=Hutchison/Stanley Paul|isbn=0-09-134900-1|year=1978|pages=p87] [cite web|url=http://sport.guardian.co.uk/motorsport/story/0,,2104097,00.html|title=Stick to the day job, Jacques|publisher=Guardian Unlimited|author=Oliver Irish|date=2007-06-15|accessdate=2007-12-05] Using either definition, Hill is still the only person ever to have accomplished this feat.

With works drives becoming hard to find, Hill set up his own team in 1973: with sponsorship from . The team used chassis from Shadow and Lola before evolving the Lola into its own design in 1975. After failing to qualify for the , where he had won five times, Hill retired from driving to concentrate on running the team and supporting his protege .

Hill's record of 176 Grand Prix starts remained in place for over a decade, being equalled by .

Hill married Bette in 1955. They had two daughters, Brigitte and Samantha, and a son, Damon who later became Formula One World Champion, the only son of a former champion to do so.

Before taking up motor racing, Hill spent several years actively involved in rowing. Initially, he rowed at Southsea Rowing Club, while stationed in with the Royal Navy and at Auriol Rowing Club in Hammersmith. He met Bette at a Boxing Day party at Auriol and, while courting her, he also coached her clubmates at Stuart Ladies' Rowing Club on the .

In 1952 he joined , then as now one of the largest and most successful clubs in Great Britain. From 1952 to 1954, Hill rowed in twenty finals with London, usually as stroke of the crew, eight of which resulted in wins. He also stroked the London eight in the highly prestigious at , losing a semi-final to Union Sportif Metropolitaine des Transports, France by a length.

Through his racing career he continued to support rowing and London. In 1968 when the club began a financial appeal to modernise its clubhouse, Hill launched proceedings by driving an old , which had been obtained for £5, head-on into a boundary wall. Hill made three runs to reduce the wall to rubble, and the car was subsequently sold for £15.

Hill felt that the experience gained in rowing helped him in his motor-racing. He wrote in his autobiography:

"I really enjoyed my rowing. It really taught me a lot about myself, and I also think it is a great character-building sport...The self discipline required for rowing and the 'never say die' attitude obviously helped me through the difficult years that lay ahead."

In November 1975, returning from the Paul Ricard circuit, France, Graham was killed when his Piper Aztec aeroplane (which he was piloting at the time) crashed in foggy conditions, near the 4th green, Course in . The crash resulted in not only the death of Hill but team manager Ray Brimble, mechanics Tony Alcock and Terry Richards, up-and-coming driver and designer Andy Smallman; all from the Embassy Hill team.

His funeral was at St Albans Abbey, UK.

As Hill was uninsured his estate was sued by the families of the other victims. Settling the claims wiped out the estate.

After his death, Silverstone village, home to the track of the same name, named a road, Graham Hill, after him.

*Hill's 1966 victory marked the first win by a rookie driver since 's 1927 win and the last until Juan Montoya's visit to Victory Lane in 2000.
*Hill entered the , but his car (Lotus-Ford Chassis 64/2) was withdrawn during practice along with those of Mario Andretti and Jochen Rindt due to delays rectifying problems associated with hub failure on Andretti's car.

"Time is of the essence and I don't have much essence left." [Quote from his biography published after his death] Fact|date=June 2007

Hill's easy wit and charm helped him become a personality, notably on the show "" with Patrick Campbell and . For a number of years in the early 1970s he appeared as one half of a double act, with , as an insert within the "" show.