It is best known as the home of the British Grand Prix, which it first hosted in 1948 and which has been held on the circuit every year since 1987. The circuit is also home to the BRDC International Trophy, formerly one of the premier non-Championship F1 races in the calendar, today awarded to the winner of a race for historic F1 cars at the annual Silverstone Classic meeting. The circuit is owned by the British Racing Drivers' Club.[3]

Silverstone is built on the site of a World War II Royal Air Force bomber station, RAF Silverstone, which opened in 1943. The airfield's three runways, in classic WWII triangle format, lie within the outline of the present track.

Silverstone was first used for motorsport by an ad hoc group of friends who set up an impromptu race in September 1947. One of their number, Maurice Geoghegan, lived in nearby Silverstone village and was aware that the airfield was deserted. He and eleven other drivers raced over a two mile circuit, during the course of which Geoghegan himself ran over a sheep that had wandered onto the airfield. The sheep was killed and the car written off, and in the aftermath of this event the informal race became known as the Mutton Grand Prix.[4]

The next year the Royal Automobile Club took a lease on the airfield and set out a more formal racing circuit. Their first two races were held on the runways themselves, with long straights separated by tight hairpin corners, the track demarcated by hay bales. However, for the 1949 International Trophy meeting, it was decided to switch to the perimeter track. This arrangement was used for the 1950 and 1951 Grands Prix. In 1952 the start line was moved from the Farm Straight to the straight linking Woodcote and Copse corners, and this layout remained largely unaltered for the following 35 years. For the 1975 meeting a chicane was introduced to try and tame speeds through the mighty Woodcote Corner (although MotoGP would still use the circuit without the chicane up until 1986), and Bridge Corner was subtly rerouted in 1987 before the track underwent a major redesign between the 1990 and 1991 races, transforming the ultra-fast track (where in its last years, every corner was taken in no lower than 4th or 5th gear (depending on the transmission of the car) except for the Bridge chicane, which was usually taken in 2nd gear) into a more technical track. The reshaped track's first F1 race was perhaps the most memorable of recent years, with Nigel Mansell coming home first in front of his home crowd. On his victory lap back to the pits Mansell even found time to pick up stranded rival Ayrton Senna and give him a lift on his side-pod, after Senna's McLaren had run out of fuel on the final lap of the race.

Following the deaths of Senna and fellow Grand Prix driver Roland Ratzenberger at Imola in 1994, many Grand Prix circuits were modified in order to reduce speed and increase driver safety. As a consequence of this the entry from Hangar Straight into Stowe Corner was modified in 1995 so as to make its entry less dangerous and, as a result, less challenging, and the flat-out Abbey kink was modified to a chicane in just 19 days before the 1994 GP.

Historically Silverstone has suffered traffic congestion on race days. This problem has been largely eliminated with the completion of the A43 Silverstone bypass, a dual-carriageway road just to the north of the circuit. When the race was moved to an April date in 2000, rainy conditions turned the fields used for car parking into mud baths, causing chaos for spectators trying to park.[5] On F1 race day a large number of spectators travel to the circuit by helicopter: enough to make Silverstone Heliport the busiest airport in the UK for this day.[6]

Hosting Grands Prix and Formula One

Bernie Ecclestone stated that he would negotiate the future of Formula One at Silverstone post-2009 only if the BRDC gives up its role as promoter of the event. In an Autosport interview he said "I want to deal with a promoter rather than the BRDC. It is too difficult with the BRDC because you get no guarantees with them. We've said that unless they can get the circuit to the level expected from so-called third-world countries we are not prepared to do a deal. They know what we want them to build."[9] A new pit-and-paddock complex is the minimum redevelopment required.[9] Maurice Hamilton has described the attitude of the BRDC as "[appearing to be] inflexible and sometimes arrogant".[10] During testing ahead of the British Grand Prix, Damon Hill likened the relationship between the BRDC and governing body as that of Aladdin's Cave: "The genie says give me the lamp and Aladdin says get me out of the cave and I’ll give you the lamp. You’re in this constant cycle whereby in order to get our plans implemented we need to have a Grand Prix contract, and in order to get the Grand Prix contract we have to have our planning."[11]

On 12 January 2009 it was announced that Silverstone will host the British MotoGP from 2010 after signing a five year deal to hold this event.[14]

On 18 February 2009, the first pictures of the MotoGP Layout emerged (this has since changed to the layout now being constructed). The track will be slightly longer than the Grand Prix circuit, as it uses parts of the three main configurations at Silverstone – the Grand Prix circuit from the start-finish to Abbey corner, then turns right to go up part of the International layout in reverse, before joining the National Circuit's straight from a left-hand hairpin known as the Arrowhead. Having negotiated the straight, the bikes will rejoin the Grand Prix circuit at Brooklands.[15]

On 20 June 2009 Bernie Ecclestone stated that there would be a British Grand Prix at Silverstone in 2010 if Donington was not ready to host it. When asked why he had moved from his previous "Donington or nothing" standpoint he cited changes in the structure of the BRDC meaning there was a better way of negotiating with them over future commercial rights. Furthermore during an interview with the BBC about the Formula One Teams Association threatening to break away and form their own series, FIA president Max Mosley said it was "highly likely" the 2010 British Grand Prix would return to Silverstone.[16] On 24 October 2009, BBC News reported that Donington had failed to raise the £135 million needed to stage a British Grand Prix, that Donington's bid 'looks over' and that Bernie Ecclestone had offered the race to Silverstone, but that the terms appeared to be the same as those that the Circuit rejected the first time around.[17]

On 7 December 2009, Silverstone was awarded the rights to host the British Grand Prix for the next 17 years. Part of the deal is for a new pit lane to be built.[18]

On 11 February 2010, it was announced that the British Grand Prix would use the "Arena" circuit configuration, thus increasing the track's length by 759 metres.[19][20] Ahead of the 2011 Grand Prix, a new pit complex is scheduled to be completed, making the straight between Club and Abbey corners the new pit straight.[21][22]

On 1 March 2011 Silverstone Circuits confirmed that the Bridge section of the track had been decommissioned and would not be used again. Large scale earthworks are currently taking place to open up this area for spectators. "the old Bridge section of the circuit has been decommissioned and this has been sanctioned by the BRDC – however please note that the tarmac will still remain intact and not be removed. This decision was not taken lightly but with the development of The Silverstone Wing and the new pit lane exit, the Bridge section of the Grand Prix Circuit has been made redundant. The banked area that you have shown in your photo will open up the track at Luffield and will become a new spectator area bringing fans closer to the action."[23] 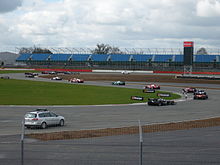 Formation lap around Brooklands corner at the 2010 Superleague Formula round

The Dunlop MSA British Touring Car Championship withdrew the track from its calendar in 2007, however demand from teams and sponsors saw the return of Silverstone to the 2008 BTCC calendar. Silverstone also hosts rounds of the FIA GT, British Superbikes, British F3, British GT and Le Mans Series championships as well as many club racing series. It is also host to one of the UK's only 24-hour car races, the Britcar 24, which is gaining in popularity, having first started in 2005.

It has in the past hosted exhibition rounds of the D1 Grand Prix both in 2005 and 2006. The course, starting from the main straight used in club races, makes use of both Brooklands and Luffield corners to form an S-bend – a requirement in drifting – and is regarded by its judge, Keiichi Tsuchiya, as one of the most technical drifting courses of all.[24] The section, used in drifting events since 2002, is currently used to host a European Drift Championship round. The Course also hosts the Formula Student Competition by the iMeche yearly.

Both the FIM and Silverstone acknowledged a need for the circuit to be remodelled in order to become more suitable for motorcycle racing, with particular concerns raised by riders over the proximity of the bridge at Bridge corner.[26]

A £5m renovation plan was put forward in February 2009.[27] The most notable change of the remodelling is the addition of a new "Arena" section that will see riders turn right at the Abbey Chicane and head towards the new Arena section in what is currently the infield, turning left onto the National Circuit straight and then rejoining the original Grand Prix circuit at Brooklands, just before Woodcote and the Finishing straight. The new 'Arena' will consist of three new grandstands. Silverstone later claimed that the changes would make the circuit the fastest track on the MotoGP calendar.[28] This additional section is also planned to be used in the 2010 Formula 1 British Grand Prix.

On 22 January 2010 it was confirmed that Silverstone would host the British round of the 2010 Superbike World Championship season, taking over from Donington Park after the circuit was deemed "un-raceable" due to the postponed construction that had commenced in 2009.[29]

Like many racing circuits around the world, Silverstone Circuit has a number of different layouts which offer differing lengths and complexity.

On the TV show Fifth Gear Jason Plato set a lap record of 2:22.14 for a production car on the new Arena layout in a Noble M600 .