The Autodromo Nazionale Monza is a race track located near the town of Monza, north of Milan, in Italy. The circuit's biggest event is the Formula One Italian Grand Prix, which has been hosted there since the sport's inception.[4]

Built in the Royal Villa of Monza park in a woodland setting,[5] the site has three tracks – the 5.793 kilometres (3.600 mi) Grand Prix track,[2] the 2.405 kilometres (1.494 mi) Junior track,[3] and a decaying 4.250 kilometres (2.641 mi) high speed track with steep bankings.[4] Major features of the main track include the Curva di Lesmo, the Curva Parabolica, and the Variante Ascari. The high speed curve, Curva Grande, is located after a slow corner, but usually taken flat out by Grand Prix cars.

Drivers are on full throttle for most of the lap due to its long straights and fast corners, and is usually the scenario in which the open-wheeled F1 cars show the raw speed they are capable of (372 kilometres per hour (231 mph) during the V10 engined formula). The circuit is generally flat, but has a gradual gradient from the second Lesmos to the Variante Ascari. Due to the low aerodynamic profile needed, with its resulting low downforce,[6] the grip is very low; understeer is a more serious issues than at other circuits, however, the opposite effect, oversteer, is also present in the second sector, requiring the use of a very distinctive opposite lock technique. Since both maximum power, and minimal drag is the key for speed on the straights, only competitors with enough power at their disposal are able to challenge for the top places.[6]

In addition to Formula One, the circuit hosts an endurance event, the 1000 km Monza, which has been run as part of the World Sportscar Championship and the Le Mans Series. Monza also featured the unique Race of Two Worlds events, which attempted to run Formula One and United States Auto Club National Championship cars against each other, and previously held rounds of Grand Prix motorcycle racing, in the Italian motorcycle Grand Prix. Current major events are races of the World Touring Car Championship and the Superbike World Championship, as well as various local championship races.

The Monza circuit has been the arena of many fatal accidents, especially in the early years of the Formula One world championship,[6] and has claimed the lives of 52 drivers and 35 spectators. Track modifications have continuously occurred, to improve spectators safety and reduce curve speeds,[4] but it is still criticised by the current drivers for its lack of run-off areas, most notoriously at the chicane that cuts the Variante della Roggia.[6] 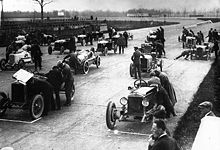 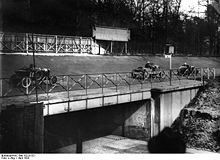 A race in 1925 with cars racing across the bridge.

In 1928, the most serious Italian racing accident to date[5][6] ended in the death of driver Emilio Materassi and 27 spectators at that year's Grand Prix.[5][6] The accident led to further Grand Prix races confinement to the high-speed loop until 1932.[8] The 1933 race was marked by the deaths of three drivers[7] and the Grand Prix layout was changed, with two chicanes added and the longer straights removed.[9]

There was major rebuilding in 1938–39, constructing new stands and entrances, resurfacing the track, moving portions of the track and adding two new bends.[7][8] The resulting layout gave a Grand Prix lap of 6.300 kilometres (3.91 mi), in use until 1954.[10] The outbreak of World War II meant racing at the track was suspended until 1948,[10] and parts of the circuit degraded due to the lack of attention.[4] Monza was renovated over a period of two months at the beginning of 1948,[7] and a Grand Prix was held on 17 October 1948.[10]

In 1954, work began to entirely revamp the circuit, resulting in a 5.750 kilometres (3.573 mi) course, and a new 4.250 kilometres (2.641 mi) high-speed oval with banked sopraelevata curves.[4][11] The two circuits could be combined to re-create the former 10 kilometres (6.214 mi)[4] long circuit, with cars running parallel on the main straight. The track infrastructure was also updated and improved, to better accommodate the teams and spectators.[7][11]

The Automobile Club of Italy held 500-mile (805 km) Race of Two Worlds exhibition competitions, intended to pit United States Auto Club IndyCars against European Formula One and sports cars.[4][11] The races were held on the oval at the end of June in 1957 and 1958,[12] with three 63 lap[13] 267.67 kilometres (166.32 mi) heat races each year, races which colloquially became known as the Monzanapolis series.[12][14] However, concerns were raised among the European drivers that flat-out racing on the banking would be too dangerous,[14] so ultimately only Ecurie Ecosse and Maserati represented European racing at the first running.[15] The American teams had brought special Firestone tyres with them, reinforced to withstand high-speed running on the bumpy Monza surface, but the Maseratis' steering was badly affected by the larger-than-usual tyre size, leading to the Modena-based team withdrawal.[15] Ecurie Ecosse's three Jaguar D-type sports cars used their Le Mans-specification tyres with no ill-effects, but were completely out paced. Two heats in 1957 were won by Jimmy Bryan in his Kuzma-Offenhauser Dean Van Lines Special,[15][16] and the last by Troy Ruttman in the Watson-OffenhauserJohn Zink Special.[17] In 1958, works Jaguar, Ferrari and Maserati teams appeared alongside the Indy roadsters,[11][18] but once again the American cars dominated the event and Jim Rathmann won the three races in a Watson-Offenhauser car.[12]

Formula One used the 10 kilometres (6.214 mi) high speed track in 1955, 1956, 1960 and 1961 Grands Prix.[4][11] Stirling Moss and Phil Hill both won twice in this period, with Hill's win at Monza making him the first American to win a Formula One race.[19] The 1961 race saw the death of Wolfgang von Trips and fifteen spectators, when a collision with Jim Clark's Lotus sent von Trips car airborne and into the barriers on Parabolica.[7][19] Although the accident did not occur on the oval section of the track, the high speeds were deemed unsafe and F1 use of the oval was ended;[20] future Grands Prix were held on the shorter road circuit,[11] with the banking appearing one last time in the film Grand Prix.[20] New safety walls, rails and fences were added before the next race, and the refuelling area was moved further from the track. Chicanes were added before both bankings in 1966, and another fatality in the 1968 1000 km Monza race led to run-off areas added to the curves, with the track layout changing the next year to incorporate permanent chicanes before the banked curves – extending the track length by 100 metres (328 ft).[11] The banking held the last race in 1969 with the 1000 km of Monza, the event moving to the road circuit the next year.[11] The banking still exists, albeit in a decayed state in the years since the last race, escaping demolition in the 1990s.[20]

Both car and Grand Prix motorcycle racing were regular attractions at Monza,[11] but as the speed of the machines were increasing, two chicanes- the Curva Grande at the end of the start/finish straight,[21] and the Ascari, were added in 1972 to reduce racing speeds.[7] This resulted in a new circuit length of 5.755 kilometres (3.576 mi).[21] Grand Prix motorcycles continued to use the un-slowed road track until two serious accidents resulted in five deaths, including Renzo Pasolini and Jarno Saarinen,[21] in 1973, and motorcycle racing did not return to Monza until 1981.[21] These races involved drivers constantly slipstreaming competing cars, which produced several close finishes, such as in 1967, 1969, and 1971; the last year the Italian Grand Prix was run at Monza without chicanes.

With technology still increasing vehicle speeds, the track was modified again in 1979, with added kerbs, extended run-off areas, and tyre-barriers improved, to improve safety for drivers off the track.[22] The infrastructure was also improved, with pits able to accommodate 46 cars, and an upgraded paddock and scrutineering facilities.[22] These changes encouraged world championship motorcycling to return in 1981, but further safety work was undertaken through the 1980s.[22] Also in the 1980s the podium, paddock and pits complex, stands,[22][23] and camp site were either rebuilt or improved.[7]

In the safety conscious years following the death of Ayrton Senna in 1994 (albeit at a different track), the three main long curves were "squeezed" in order to install larger gravel traps, shortening the lap to 5.770 kilometres (3.585 mi).[23] In 1997 the stands were reworked to expand capacity to 51,000.[23] In 2000, the chicane on the main straight was altered, changing from a double left-right chicane to a single right-left chicane, in an attempt to reduce the frequent accidents at the starts due to the conformation of the braking area, although it is still deemed unsafe in terms of motorcycle racing. The second chicane was also re-profiled. In the Formula 1 Grand Prix of the same year, the first to use these new chicanes, a marshal, Paolo Gislimberti, was killed by flying debris after a big pileup in the second chicane.[6]

In 2007, the run off area at the second chicane was changed from gravel to asphalt. The length of the track in its current configuration is 5.793 kilometres (3.600 mi).[2] At the 2010 Monza Superbike World Championship round, Italian rider Max Biaggi set the fastest ever motorcycle lap of Monza when he rode his Aprilia RSV4 1000 F to pole position in a time of 1:42.121. In the Superpole qualification for the 2011 race, he improved on this lap time, for a new lap record of 1:41.745 and his speed was captured at 205+ MPH. This contrasts to the fastest ever Formula One lap of Monza in its current configuration, set at the 2004 Italian Grand Prix, when Rubens Barrichello drove his Ferrari F2004 to a time of 1:20.089. This ~20-second discrepancy between race motorcycle and Formula 1 car speeds is attributed to the difference in size of the tyre contact patch and the fact that motorcycles cannot generate high lateral 'G' forces.

A lap of the circuit in a Formula One car 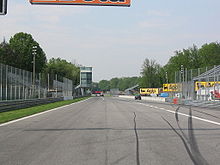 Monza consists of very long straights and tight chicanes, putting a premium on good braking stability and traction. The circuit, of 5.793 kilometres (3.600 mi),[2] is very hard on gearboxes, with many gear changes per lap. Formula 1 engines are at full throttle for nearly 80% of the lap, with engine failures common, notably Fernando Alonso in the 2006 Italian Grand Prix.

It is important to accelerate out of the first chicane as straight as possible and with minimal wheelspin, as a lot of time will be lost through the Curva Grande down to the Variante della Roggia chicane in 7th gear, at 330 kilometres per hour (210 mph).[2] The braking point is just under the bridge. The kerbs are very vicious, and it is very easy for a car to spin as Kimi Räikkönen did in 2005. This chicane is probably the best overtaking chance on the lap, as it is the only one with the "slow corner, long straight, slow corner", one of the characteristics of the modern circuits. 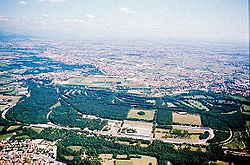 Aerial photo of the Autodoromo of Monza, with the village of Villasanta in the upper part. City of Monza is southwards, off the right side of the photo.

The final challenge is the Curva Parabolica, approaching at 335 kilometres per hour (208 mph) in 7th gear,[2] cars quickly dance around the corner, apexing in fourth gear at 215 kilometres per hour (134 mph),[2] and exiting in 5th gear at 285 kilometres per hour (177 mph)[2] accelerating onto the main start/finish straight. A good exit and slipstream off a fellow driver along the main straight could produce an overtaking opportunity under heavy braking into the Variante del Rettifilio chicane, however it is difficult to follow a leading car closely through the Parabolica as the tow will reduce downforce and cornering speed.

Rubens Barrichello recorded the fastest ever pole position lap at Monza in 2004 when he lapped in 1m20.089s, 161.802 mph. But in the pre-qualifying session for the same race (which did not count for a grid position but only Q-running order), Juan Pablo Montoya lapped the track in 1m19.525s (162.949 mph) which remains the fastest lap ever recorded in an F1 car.[25]