Darlington Raceway is a race track built for NASCAR racing located near Darlington, South Carolina. It is nicknamed the "Lady in Black" and "The Track Too Tough to Tame" by many NASCAR fans and drivers and advertised as "A NASCAR Tradition". It is of a unique, somewhat egg-shaped design, an oval with the ends of very different configurations, a condition which supposedly arose from the proximity of one end of the track to a minnow pond the owner refused to relocate. This situation makes it very challenging for the crews to set up their cars' handling in a way that will be effective at both ends.

Harold Brasington was a retired racer in 1948. He had gotten to know Bill France, Sr. while competing against France at the Daytona Beach Road Course and other dirt tracks in the Southeast and Midwestern United States. He quit racing in the late 1940s to concentrate on farming and his construction business.[1] He began planning a new speedway after he noticed the huge crowds while attending the 1948 Indianapolis 500.[1] He thought "If Tony Hulman can do it here, I can do it back home."[1] He bought 70 acres from farmer Sherman Ramsey, and started making a race track from a cotton and peanut field.[1] He was forced to create an egg-shaped oval with one corner tighter, narrower, and more steeply banked because he promised Ramsey that the new track wouldn't disturb Ramsey's minnow pond at the west side of the property.[1] Brasington was able to make other turn at the east side of the property wide, sweeping, and flat as he wanted.[1] It took almost a year to build the track.[1] 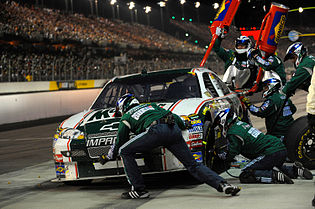 Dale Earnhardt Jr. on pit road, as his team completes a pit stop during the 2008 Dodge Challenger 500

Brasington made a deal in the summer of 1950 with France to run a 500-mile (800 km) race in Darlington on Labor Day that year. The first Southern 500 carried a record $25,000 purse, and was co-sanctioned by NASCAR and its rival Central States Racing Association.[2] More than 80 entrants showed up for the race.[2] Brasington used a 2 week qualifying scheme similar to the one used at the Indianapolis 500.[2] Brasington was also inspired by Indianapolis when he had the 75 car field aligned in 25 rows of three cars.[2] These practices have been curtailed over the years as NASCAR adopted a more uniform set of guidelines with regard to the number of cars which could qualify for a race. The race was won by Johnny Mantz in a car owned by France.

In recent years the track has been reconfigured; what was the front stretch is now the back stretch, from late 2003 to early 2004 lights were installed for night racing to beat the heat, and the turns have been renumbered accordingly. Seating has been increased to approximately 65,000, although it has been limited by the proximity of a highway behind the back stretch and another pond; the original minnow pond is long gone.

Darlington has something of a legendary quality among drivers and older fans; this is probably due to its long track length relative to other NASCAR speedways of its era and hence the first venue where many of them became cognizant of the truly high speeds that stock cars could achieve on a long track. The title of how the track earned the moniker The Lady in Black was allegedly because the walls around the track are always painted white prior to a race, but are always largely black by the end of it due to a profusion of tire contacts. Darlington is also known as "The Track Too Tough to Tame", and rookie racers hitting the wall are considered to have received their "Darlington stripe".

For many years Darlington was the site of two annual Sprint Cup Series races; one, the Rebel 400, was held in the spring and the other, the Southern 500, was always held on Labor Day weekend. In 2003, the Labor Day event was given to California Speedway, and the Southern 500 was moved to November 2004 and was run as part of the Chase for the NEXTEL Cup. In 2005, NASCAR eliminated the Southern 500 altogether, offending many traditionalists. The race was merged into the 400-mile (640 km) spring race, and moved to Mother's Day Weekend. A 500-mile race named after a Dodge vehicle was held for the next four years, before the race was given the Southern 500 moniker in 2009.

The move was the result of several factors. Darlington suffered from poor ticket sales, particularly in the spring. Part of this is due to the track's location in the Textile Belt of South Carolina, where there has been an ongoing general economic decline for many years. Additionally, there is very little of interest to the average fan from outside the Darlington area other than the events at the track itself. Many newer NASCAR venues are near major cities to avoid this problem. A further factor in the move was an ongoing desire by NASCAR to spread its events out over more of the country.

Darlington received a $10 million upgrade in 2006, the largest investment in the track's history. This followed a $6 million upgrade the previous year, which included an entire repaving of the oval for the first time since 1995.[3] This silenced many concerns over the future of Darlington Raceway in NASCAR. Darlington Raceway has sold out its Mother's Day weekend Sprint Cup race four years in a row, which may enable the track to protect its place on the Sprint Cup Series schedule in future years.[4]

The Darlington Raceway Stock Car Museum is an automotive museum that focuses on the history of Darlington Raceway and the sport of stock car racing. Exhibits include race car history, memorabilia and classic cars, including ones driven at Darlington by such famous race car drivers as Richard Petty, Darrell Waltrip, and the 1950 Plymouth that Johnny Mantz drove to win the first Southern 500 at Darlington. The museum also features the National Motorsports Press Association (NMPA) Hall of Fame about the sport of NASCAR racing. Inductees include Alan Kulwicki, David Pearson, Junior Johnson, Lee Petty, Richard Petty and Neil Bonnett.

The museum was conceived by Nascar race car champion Joe Weatherly, who was killed while driving at Riverside International Raceway in 1964, and was dedicated to him in 1965. The museum was originally known as the Joe Weatherly Stock Car Museum until it was expanded in 2003.[5]