The NASCAR Nationwide Series is a stock car racing series owned and operated by the National Association of Stock Car Auto Racing. It is promoted as NASCAR's "minor league" circuit, and is a proving ground for drivers who wish to step up to the organization's "big leagues"; the Sprint Cup circuit. Nationwide Series races are frequently held in the same venue as, and a day prior to, the Sprint Cup race scheduled for that weekend, encouraging fans to attend both events.

The series was previously called the NASCAR Busch Series and the NASCAR Busch Grand National Series. In December 2006, NASCAR officials confirmed that Anheuser-Busch, parent company for Busch Beer, would not renew its sponsorship of NASCAR's No. 2 series after the end of the 2007 Season. On October 3, 2007, it was announced Nationwide Insurance would become the title sponsor beginning with the 2008 season.

The Nationwide Series field following the pace car at Texas in April 2007.

The series emerged from NASCAR's Sportsman division, which had been formed in 1950 as NASCAR's short track race division. It was NASCAR's fourth series (after the Modified and Roadster series in 1948 and Strictly Stock in 1949). The sportsman cars were not current model cars and could be modified more, but not as much as Modified series cars.[1] It became the Late Model Sportsman series in 1968, and soon featured races on larger tracks such as Daytona International Speedway. Drivers used obsolete Grand National (now Sprint Cup) cars on larger tracks but by the inception of the touring format in 1982, the series used older compact cars. Short track cars with relatively small 300 cubic inch V-8 motors were used. Drivers used smaller current year models featuring V6 motors.

The modern-day Nationwide Series was formed in 1982, when Anheuser-Busch sponsored a newly reformed late-model sportsman series with its Budweiser brand. The series switched sponsorship to Busch in 1984. It was renamed in 1986 to the Busch Grand National Series.

Grand National was dropped from the series' title in 2003 as part of NASCAR's brand identity (the Grand National name was now used for the Busch East and Winston West series as part of a nationwide standardization of rules for NASCAR's regional racing). Following the 2007 season, Anheuser-Busch, makers of the Busch brand of beer, said they would not renew their contract with NASCAR. In 2008 Nationwide Insurance became the title sponsor of the "NASCAR Nationwide Series".[2]

On March 6, 2005, the Series held its first race outside the United States, the Telcel-Motorola 200. The race was held in Mexico City, Mexico at the Autodromo Hermanos Rodriguez, a track that has held Formula One and Champ Car races in the past. It was won by Martin Truex Jr. On August 4, 2007, the Series held its second race outside of the United States, at the Circuit Gilles Villeneuve in Montreal, Quebec, another road course. It was won by Kevin Harvick, while Quebec native Patrick Carpentier finished second. In July 2008 NASCAR announced that the Nationwide Series would not return to Mexico City's Autodromo Hermanos Rodriguez in 2009.

Since 2007, ESPN2 as well as ABC and ESPN have been the exclusive carrier of all Nationwide Series races, replacing Fox, FX, TNT and NBC. Some sponsors have criticized the new television deal, noting only four (six in 2007) races will appear on broadcast network television (through a branding deal on ABC); in recent years, as many as ten races in the Nationwide Series have aired on network television. Most of the races on ABC were chosen so ESPN2 could air major sporting events. However in 2011, SPEED Channel has gained rights to the Spring Richmond race ending ESPN's exclusivity of the Nationwide Series. ESPN will still air the 33 other races with only four races (Las Vegas, Iowa, Charlotte, Michigan) being shown on ABC.

The Nationwide Series is available in most Latin American countries on cable and satellite TV. Since 2006, 'SPEED Latin America' carries live coverage of all events. The races are also shown on Fox Sports Latin America, some of them live and some tape-delayed depending on the network's schedule. Televisa Deportes also broadcasts a 30-minute recap every Sunday morning on national television in Mexico.

Network Ten's additional high-definition service, ONE, began broadcasting races from the Nationwide Series live or near live during the 2008 season. Previously, broadcasts of the series were carried on the Fox Sports pay TV channel.

All races are live on TSN HD or TSN2 HD using ESPN's coverage. Races that are aired on TSN2 are usually re aired on TSN late night after the race.

In recent years, this practice had been termed "Buschwhacking" by those who criticize it. The colloquialism originated from the words "Busch" and "bushwhacker" during the days when Anheuser-Busch was the main sponsor of the series but it has gradually fallen out of use since Nationwide took over as title sponsor.

In 2007, the Sprint Cup Series began racing with the Car of Tomorrow, a radically new specification different from the Nationwide Series. Sprint Cup drivers have admitted that driving the Nationwide car the day before the race does not help much with the Sprint Cup race because the cars drive so differently. This may change with the new Nationwide Series car making its debut in the July 2010 Daytona race. This car has a set-up closer to the current Cup car and some Cup drivers who have tested the car say it has similar handling characteristics. The new car goes full time in the 2011 season. In 2007, six out of the top ten drivers in the final point standings were Cup regulars, with Jason Leffler being the only non-Cup driver in that group to win a race in '07. This number decreased from 2006 when 8 out of 10 drivers were Cup regulars. The decreased number is attributed to Cup regulars running only partial schedules, allowing for more Nationwide regulars to reach the top ten in points. However, the 2006, 2007, 2008, 2009, and 2010 champions were all Cup regulars driving the full series schedule (Kevin Harvick, Carl Edwards, Clint Bowyer, Kyle Busch, and Brad Keselowski). As a result, starting with the 2011 season, NASCAR implemented a rule that stated that a driver could only race for the drivers' championship in one of three national series (Sprint Cup, Nationwide, and Camping World Truck) of the drivers' choosing.

Comparison with a Sprint Cup Car

With the advent of NASCAR's Car of Tomorrow, Nationwide Series cars have become very different from their Sprint Cup Series counterparts, the main differences being a slightly shorter wheelbase (105" instead of 110"), 100 pounds less weight, and a less powerful engine. In the past, Nationwide Series competitors could use makes of cars not used in the Cup series, as well as V-6 engines instead of Cup's V-8s.

In 1995, changes were made. The series switched to V-8s with a compression ratio of 9:1 (as opposed to 14:1 for Cup at the time). The vehicle weight with driver was set at 3,300 pounds (as opposed to 3,400 for Cup). The body style changes, as well as the introduction of V-8s, made the two series' cars increasingly similar.

Previously, Nationwide Series cars used fuel that contained lead. NASCAR conducted a three-race test of unleaded fuel in this series that began with the July 29, 2006 race at Gateway International Raceway. The fuel, Sunoco GT 260 Unleaded, became mandatory in all series starting with the second weekend of the 2007 series, as Daytona was the last race weekend with leaded fuel.

Another distinction between the cars became clear in 2008. NASCAR had developed rain tires for road course racing in both series, but never had to use them in race conditions. The program was abandoned by the Sprint Cup Series in 2005, but the Nationwide Series continued to use rain tires in races at Autodromo Hermanos Rodriguez and Circuit Gilles Villeneuve could not be planned with rain dates. When rain started to fall at the 2008 NAPA Auto Parts 200, the tires were given their first laps under race conditions.[6] 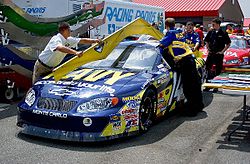 The body also has differences between each manufacturer, but still within strict aerodynamic guidelines provided by NASCAR. The Chevrolet car body resembles the Impala, the Dodge body the Challenger, the Ford body the Mustang and the Toyota body the Camry.[9]