The Dodge Intrepid is a large four-door, full-size, front-wheel drive sedan car model that was produced for model years 1993 to 2004. It was mechanically related to the Chrysler Concorde, Chrysler LHS, Chrysler New Yorker, Eagle Vision, and also the 300M sedans. The Intrepid, Concorde, and Vision were collectively designated the LH, Chrysler's codename for the platform which underpinned them. It was sold in Canada as the Chrysler Intrepid. It replaced the Chrysler Dynasty (Canada) and Dodge Monaco (United States) as Dodge's largest car. With Dodge's introduction to Mexico that time, it was badged as a Dodge, replacing the Dynasty when it was sold under the Chrysler brand.

The Intrepid's design can be traced to 1986, when designer Kevin Verduyn completed the initial exterior design of a new aerodynamic concept sedan called Navajo. The design never passed the clay model stage.

It was also at this time that the Chrysler Corporation purchased bankrupt Italian sports car manufacturer Lamborghini. The Navajo's exterior design was reworked and became the Lamborghini Portofino, released as a concept at the 1987 Frankfurt Auto Show. The Portofino was heralded as a design triumph, setting in motion Chrysler's decision to produce a production sedan with the Portofino's revolutionary exterior design, called "cab-forward".

The cab forward design was characterized by the long, low slung windshield, and relatively short overhangs. The wheels were effectively pushed to the corners of the car, creating a much larger passenger cabin than the contemporaries of the time.

Design of the chassis began in the late 1980s, after Chrysler had bought another automaker: American Motors Corporation (AMC) in 1987. During this time, Chrysler began designing the replacement for the then-new Dodge Dynasty, which was a mid-size car. Initially it bore resemblance to the Dynasty, and this design was scrapped entirely after François Castaing, formerly AMC's Vice President of product engineering and development, became Chrysler's Vice President of vehicle engineering in 1988. The new design, under Castaing's leadership, began with the Eagle Premier.

The Premier's longitudinal engine mounting layout was inherited, as was the front suspension geometry, and parts of the braking system. The chassis itself became a flexible architecture capable of supporting front or rear-wheel drive (designated "LH" and "LX" respectively).

The chassis design was continually refined throughout the following years, as it underpinned more Chrysler prototypes: the 1989 Chrysler Millennium and 1990 Eagle Optima.

By 1990, it was decided that the new technologically-advanced car would need a new technologically-advanced engine to power it. Until that time, the only engine confirmed for use was the 3.3 L pushrod V6. The 3.3 L engine's 60° block was bored out to 3.5 L, while the pushrod-actuated valves were replaced with SOHC cylinder heads with four valves per cylinder, creating an advanced 3.5 L V6. For the second generation Intrepid R/T the block was recast in aluminum as part of a comprehensive upgrade.

The Intrepid was available in two trim levels: base and the sportier, better-equipped ES, which added four-wheel disc brakes, 16" wheels with better tires, and stiffer "touring" suspension damping. All Intrepids received driver and front passenger airbags, a rarity at the time, as well as air conditioning and the four-speed automatic transmission. Anti-lock brakes were optional, as was traction control and the more powerful 3.5 L SOHC engine (214 hp peak).

The Intrepid's launch marked a new image for the Dodge brand, which began to market itself as "The New Dodge" with a sophisticated marketing campaign featuring actor Edward Herrmann, who would go on to serve as the brand's spokesperson for the rest of the decade.

Changes were few over the Intrepid's initial five-year production. A new variable-assist power steering rack replaced the original for 1994, allowing for easier parking while maintaining a firmer feel at speed. The touring suspension tuning was also made standard equipment in the base model this year. Anti-lock brakes were made standard in the ES in 1995, and in 96 a new manual shift function for the automatic transmission, called Autostick, was inherited from the Eagle Vision TSi: the first transmission of its kind available in a mainstream car. The Intrepid was often compared with the Chevrolet Lumina and Ford Taurus, and to a lesser extent, the Toyota Camry and Honda Accord.[1]

Intrepids were built at AMC's former assembly plant, originally used to manufacture the Eagle Premier, in Brampton, Ontario, Canada; and at the Chrysler plant at Newark, Delaware.

In 2001, the Intrepid made its debut on the NASCAR circuit, signifying the return of Chrysler to NASCAR competition after a 16-year hiatus. Drivers in the initial Dodge campaign included Bill Elliott, Jason Leffler, Ward Burton, Sterling Marlin, John Andretti, Buckshot Jones, Kyle Petty, Stacy Compton, Dave Blaney, and Casey Atwood. Marlin was the first to win in a Dodge, giving the marque its first victory since 1977, with the late Neil Bonnett driving.

The R/T was discontinued in 2003 but a new SXT model kept the 3.5 L High Output motor, increased to a 250 hp (186 kW) power rating. The SXT moniker was eventually used across the Dodge product line as a trim level. The Intrepid SXT was basically a base model Intrepid SE with the 3.5 H.O. engine taken from the R/T, with some "sportier" features such as a sunroof and spoiler. It was a value trim model actually classified as an ES (SXT), but had less features than the ES did with a more powerful motor.

In addition, the second generation body styles were used for commercial and government purposes. These vehicles were used to make police interceptors, fire chief cars, and taxis similar to the earlier Chevy Caprice or Ford Crown Victoria. These packages had distinctive styling differences (such as half-moon hub caps) and additional wiring to support strobes and flashers in the trunk compartment and in the front by the grill. These packages and some non-police (non-commercial) packages featured plastic front-end intake vents that routed air onto the rotors for additional cooling and stopping power.

DaimlerChrysler discontinued the Intrepid after 2004 to make room for the 2005 Dodge Magnum station wagon and 2006 Dodge Charger sedan. 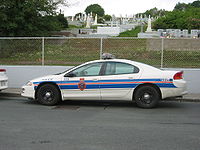 In the late 1990s, Chrysler used the Intrepid as a research platform for a hybrid electric vehicle in a diesel-electric configuration. Three variations were built, the Intrepid ESX, ESX II, and ESX III. The first vehicle was built in a series hybrid configuration, while the next two were considered mild hybrids. These were attempted in the time frame of 1997 to 1998.

The ESX design team set a high goal of making the vehicle capable of sipping gasoline at the rate of 80 miles per US gallon (2.9 L/100 km; 96 mpg-imp), but the eventual vehicle only achieved an estimated 55 miles per US gallon (4.3 L/100 km; 66 mpg-imp). The figure was impressive for such a vehicle. However, the car used a number of exotic materials, which made the cost excessive if it were ever to go into full-scale production. It was estimated that the car would cost $80,000, or roughly $60,000 more than a regular Intrepid. Part of this price increase was caused by the use of lead-acid batteries.

The ESX II team set a somewhat more modest goal of 70 miles per US gallon (3.4 L/100 km; 84 mpg-imp). The vehicle was made much lighter than normal by using an aluminum frame and carbon fiber composite material. This version only cost around $37,000, or about $15,000 more than a standard Intrepid. This version used nickel metal hydride batteries.

The third vehicle, the ESX III, had a target mileage of 72 miles per US gallon (3.3 L/100 km; 86 mpg-imp). It used less expensive materials, such as injection-molded thermoplastic instead of carbon fiber. The estimated cost was only about $7,500 more than a standard vehicle, which would give a total somewhere around $30,000. The ESX III used lithium ion batteries.

The Intrepid and Concorde were on Car and Driver magazine's Ten Best list for 1993 and 1994. The second-generation Intrepid again made the list for 1998 and 1999. Both generations won Consumer Guide's "Best Buy" award.

Some second-generation 2.7 L V6 engines have suffered from failures due to oil sludge contamination.[2][3] In February 2009, five separate class action lawsuits related to the alleged oil sludge defect were consolidated to the District of New Jersey.[4] During the Chrysler bankruptcy proceedings, there was concern among consumer advocate groups that Chrysler's proposed "free and clear" sale of assets to "New Chrysler" would allow the automaker to avoid liability for the oil sludge defect.[5]