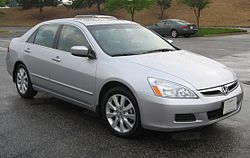 A mid-size car (occasionally referred to as an intermediate) is the North American/Australian standard for an automobile with a size equal to or greater than that of a compact. In Europe mid-sizers are referred to as D segment or large family cars.

The car that defined this size in the United States was the Rambler Six that was introduced in 1956, although it was called "compact" at that time.[1] The mid-size class then grew out of the compacts of the early-1960s. For example, the Ford Fairlane was referred to at its introduction in 1962 as a compact intermediate because it was barely bigger than its close relative, the Falcon. General Motors' first entries in the class, such as the Oldsmobile F-85, Pontiac Tempest, and Buick Special were not mechanically related to the compact Chevrolet Corvair, but were similar in size. At that time vehicle classes were defined more by their wheelbase than interior passenger space and cargo capacity. The class began to grow rapidly, and for the next ten years each expansion in size in the full-size field was followed by a proportionate growth in the mid-size models. By the mid-1960s, they were as big as the full-size cars of the mid-1950s. By the mid-1970s, they were nearly as big as the full-size cars of the mid-1960s.

During the 1970s, the intermediate class was generally defined as vehicles with wheelbases between 112 inches (2,845 mm) and 118 inches (2,997 mm).A turning point occurred in the late 1970s, when rising fuel costs and government fuel economy regulations caused all car classes to shrink, and in many cases to blur. New "official" size designations in the U.S. were introduced by the EPA, which defined market segments by passenger and cargo space.[2] Formerly mid-sized cars, like the AMC Matador sedan that had a combined passenger and cargo volume of 130 cubic feet (3.68 m3), were now considered "full-size".[3] The situation was complicated when General Motors began to downsize its models about two years before everybody else. In 1978, the Chevrolet Malibu nameplate had been redesigned on a 108-inch (2,743 mm) wheelbase, while the Ford Granada moved to the 105-inch (2,667 mm) wheelbase of the Ford Fairmont's Fox platform in 1981. Both competed with the Chrysler standard and extended K-cars, often classified as compact, though mid-size by EPA standards. Former mid-size platforms such as the Plymouth Satellite would be rebranded as full-size, rebodied, or dropped in the face of the downsized Chevrolet Caprice. Some were subsequently replaced by what used to be large compacts, like the Plymouth Gran Fury in police applications. The Granada would be badged with the (formerly full-size) LTD moniker before being replaced by the class-defining Ford Taurus. Similarly, import models such as the Honda Accord and Toyota Camry that had been classified by the EPA as compact in 1985 grew to the mid-size class by the 1990s. The Accord has since grown larger; its current North American sedan version is classified by the EPA as a full-size car, although its coupe version remains in the mid-size class. 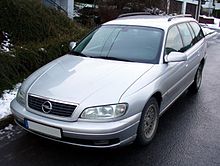 European and Australasian mid-size/large family cars are also usually offered in sedan and hatchback form, as opposed to the sole sedan form found in the models populating the North American category. European mid-size cars tend to be front-wheel drive with a focus on ride comfort, although the twisting nature of European roads demands a high level of handling agility which would not normally be required in the USA.

As elsewhere, upsizing has blurred the distinction between types, with models that and are considered compacts in North America, such as the Ford Focus and Opel Astra, approaching the mid-size category by growing larger and fitting more powerful engines with every iteration. However, it is usually thought that the categories grow along the years rather than the cars switching categories.

Sometimes the definitions of car categories are manipulated to serve marketing ends. In Australia, Toyota had categorized the V6 equipped Camry as a large car and the 4-cylinder Camry as a medium or mid-size car in order to dominate more segments, despite the physical size of the cars being identical. Similarly, the Opel/Vauxhall Omega/Cadillac Catera, which had dimensions right on the border between the North American categorizations of full-size and mid-size, was marketed as a luxury full-size car in Europe and a mid-size car in North America.

In Japan, the term mid-size car probably does not have the intermediate sense that it does in other markets. Due to space restrictions the range of cars available in this market starts from a much smaller size. As such, the models that Japan exports to other markets to compete in mid-size market segments such as the Mazda 6 and Subaru Legacy Honda Inspire (Accord US Version) occupy a more exclusive segment in the Japanese marketplace.

An interesting quirk of Japanese automotive tax codes is that width is one of factors determining which category a car is taxed under. The standards state any vehicle that is more than 4.7 m (15.4 ft) long, 1.7 m (5.6 ft) wide, 2 m (6.6 ft) high or with engines larger than 2000cc is what is called a "passenger size vehicle". This regulation also mandates that all passenger vehicles can not exceed 5 m (16.4 ft) length or 1.8 m (5.9 ft) width. Therefore even mid-sized cars destined for export markets from Japan had widths of less than 1,700 mm (66.9 in), as manufacturers had to look to domestic consumption as well as export. However, as export markets have become progressively more significant for Japanese car manufacturers, more models have been produced that break this 1,700 mm (66.9 in) wide limit.