The Mitsubishi Pajero (pronounced /pəˈdʒɛroʊ/, Spanish: [paˈxeɾo], Japanese パジェロ [padʑeɽo])[1][2] is a sport utility vehicle manufactured by Mitsubishi Motors. It was named after Leopardus pajeros, the Pampas Cat which is native to the Patagonia plateau region of southern Argentina.[3] However, since pajero is an offensive term for "wanker" in Spanish,[2] alternative names have been used for many markets overseas. It is known as the Mitsubishi Montero (meaning "mountain warrior") in Spain, India, and the Americas (excepting Brazil), and as Mitsubishi Shogun in the United Kingdom. Discontinued in the United States in 2006, the vehicle continues to sell well in the rest of the world in its fourth-generation guise.

Thanks to their success, the Pajero, Montero and Shogun names were also applied to other, mechanically unrelated models, such as the Pajero Mini kei car, the Pajero Junior and Pajero iO/Pinin mini SUVs, and the Mitsubishi Pajero/Montero/Shogun Sport. Main rivals are the Land Rover Discovery, Toyota Land Cruiser Prado SWB/LWB and Nissan Patrol.

The first Pajero prototype was unveiled at the Tokyo Motor Show in November 1973. The Pajero II prototype followed in 1978, five years later. Mitsubishi’s aim was to create more of a recreational vehicle, not just an SUV.

In January 1983, the first Pajero made its debut at the Paris Dakar Rally, taking first place in 1985 at only the third attempt. To date, the Pajero is the most successful vehicle in the Dakar Rally (winning its class 7 out of the last 10 races, and 15 of the full 32 races).[4] This not only gave the Pajero an offroad reputation, but also helped in the sales department.

The first generation made its debut at the Tokyo Motor Show in October 1981, and was launched in May 1982. Initially, it was a three-door, short-wheelbase model available with a metal or canvas top and three different engines options:

It was loaded with features that had previously not been seen on a Japanese four-wheel-drive car: a turbocharged diesel engine, a front double wishbone suspension with torsion bar springs, power steering and suspension seats. This made the Pajero a four-wheel-drive vehicle which integrated all the amenities of a passenger car.

In January 1983, only a year following its launch, mildly tuned production Pajeros entered the world of motor sport.

The Pajero, however, failed to appeal to everyone. It was seen to be a commercial vehicle, and since it was only available in a short-wheelbase form, it didn’t really appeal to those with families.

Hence, in February 1983, Mitsubishi came out with a long-wheelbase, five-door model, to serve the needs of a larger target market. The long-wheelbase model was available with a choice of two different engines; a 2.0-litre turbocharged petrol (badged as "2.0 Turbo" and "2000 Turbo" in some markets) and a 2.3 liter turbocharged diesel (badged as 2.3 TD or 2300 TD). It also came in Standard, Semi-High Roof and High Roof body styles. A stripped down nine-seater version of the High-Roof variant was commonly used in UN Peace Operations.

The long-wheelbase model also increased seating capacity to seven, with available third row seats, which could be folded to the sides for additional trunk space or combined with second row seats to form a bed.

The Pajero was further refined in June 1984. The turbo diesel engines now had higher power/torque ratings, whilst the long-wheelbase models got standard four-wheel disc brakes and four-way adjustable shock absorbers as standard equipment.

A new flagship model was then introduced in early 1987, with a two-tone paintjob, fifteen inch (38 cm) light alloy wheels, front-seat heaters, wool seat covers, genuine leather headrests, a three spoke steering wheel and a sound system with radio/cassette. Also in 1987, a version of the Pajero/Montero was rebadged by Dodge as the Raider, which ran through 1989.

Finally in 1988, a 3.0-litre SOHC V6 engine was made available, alongside a 2.5-litre turbo diesel engine, with the first 4x4 intercooler. This translated to better acceleration in mid to high rev ranges. The long-wheelbase models got a coil link suspension system for better ride comfort and off-road ability.

The Gen I platform was later built under license by Hyundai Precision Products as the Hyundai Galloper from 1991 to 2003, and exported to Europe for a brief time. While it used first generation mechanicals, the Galloper's body was closer to the second generation Pajeros.

Mitsubishi sold over three hundred thousand Pajeros in 1989 and 1990.[citation needed] However, the time for a redesign was long due and January 1991 saw the first Generation II Pajero, although exports did not commence until later. Just about everything was now new and further enhanced. A new, larger body was available in four different versions; Metal Top, Canvas Top Convertible, Semi High Roof Wagon and High Roof Wagon (long wheelbase). The short wheelbase models were stretched by 70 millimeters (2.8 inches) and the long-wheelbase models by 30 millimeters (1.2 inches). The available engines included a 3.0 liter 12-valve SOHC with ECI-Multi electronic fuel injection and a 2.5 liter turbocharged diesel engine with an intercooler.

In July 1993, two new power plants were introduced; a 3.5 liter 24-valve DOHC with ECI-Multi and a 2.8 liter turbocharged diesel with an intercooler. A new, larger transmission and transfer case was also part of the upgrade. 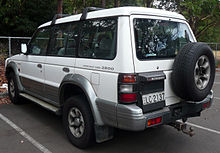 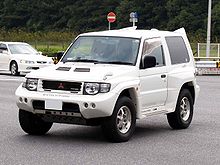 The Pajero Evolution was introduced in October 1997, which was developed in response to new entry requirements for the Paris – Dakar Rally’s T3 Class. The Pajero Evolution came standard with a 3.5 liter 24-valve DOHC V6 with Mitsubishi Innovative Valve Timing and Electronic Lift Control (MIVEC). A new, dual plenum variable intake helped increase power and a new suspension made the ride even smoother.

In 1998, vehicles destined for General Export and the GCC (Gulf Cooperation Council countries) received a facelift. Wider fenders, new headlights, grille, bumper, fog lights and sidesteps were all part of the redesign. The wide fenders are often called "blister flare fenders". Driver and front-passenger SRS airbags were made standard on models equipped with the 3.5 liter DOHC V6 engine, whilst still remaining optional on GLS models with the 3.0 liter SOHC V6. An upgraded interior wood trim was made available on 3.0 liter GLS and 3.5 liter models. A leather-wrapped or leather and wood trim steering wheel was also made available, alongside an upgraded suspension and steering system. The 3.0 liter 12-valve SOHC engine was now available with a 24-valve configuration. Models without wide fenders remained as base models (GLX), available with a 2.4 liter 16-valve DOHC engine, producing 147 hp (110 kW). The 3.0 liter 12-valve engine was optional on these GLX models, and remained the base engine on the GLS.

The second generation was introduced on January 22, 1991 and manufactured until 1999. It retained the two body styles, but design was rounder and more city-friendly than the previous bulky model. The 3.0 L V6 gasoline engine was retained, now available with a 24-valve head, capable of 136 kW (177 hp/185 PS), while the 2.5 turbodiesel's power was slightly increased to 73 kW (98 hp/99 PS). In 1993, the Pajero was slightly restyled, and larger engines were introduced, a 3.5 L V6 with 153 kW (215 hp/208 PS) and a 2.8 L SOHC turbodiesel rated at 92 kW (123 hp/125 PS). These versions introduced Mitsubishi's Super Select four-wheel-drive system (known as Active-Trac in the United States), with an electronic transfer shift that could split power between both axles without the need to stop the car. It worked at speeds up to 100 km/h (62 mph).

The first generation Pajero was also marketed as the Hyundai Galloper in Korea, Europe and GCC Countries, while the second generation was in production elsewhere.

This model Pajero remains in production in India as the Pajero SFX; the latest generation is sold as the Montero. In the Philippines it is marketed as the Pajero "Field Master" 4x2 with the 2.8L TD engine, alongside the fourth generation Pajero. The 4X4 version was taken out of production in 1999. It is also still produced in Colombia from Complete Knock Down parts (CKD), with a 2.4l 16 valve SOHC (130 PS) or 3.0l 12 valve V6 (148 PS), both engines are available as a 3-door hard top, the 5-door wagon only with the 3-litre six.

Designed in house the third generation Pajero hit the Japanese Domestic Market in 1999, whilst it was made available to other markets in late 2000 as a 2001 model. The Philippines and other developing nations received this third generation Pajero in 2003. The vehicle was completely redesigned, inside and out and had a lower, wider stance. A lower center of gravity meant the Pajero had better on-road handling manners and the newer body had over three hundred percent more torsional rigidity. The biggest change to bring this about was that the Pajero utilized a unibody construction, as opposed to the previous body-on-frame (box-ladder). This also permitted a longer suspension stroke. The fuel tank was also relocated to between the axles for better safety. The third generation Pajero moved one size up from mid-size to full-size SUV.

The SS4 system was also further refined, as bevel gears were replaced with planetary ones. This meant the front-to-rear torque setting ranged from 33 to 67, with the ability to adjust to 50/50 depending on surface conditions. The system was also made fully electronic, which meant the vehicle didn’t have to be in gear to switch between drive modes. After all the upgrades, the system was renamed to Super Select 4WD II (SS4-II).

An all-new 3.8 Liter SOHC 24-valve V6 powerplant was also introduced on this generation. This engine utilized an Electronic Throttle Valve (ETV), to deliver a refined cruising power with power to spare for offroad ventures.

The third generation was introduced on August 2, 1999 and was scheduled to be replaced by the Autumn of 2006, having been restyled in 2003. This was the most luxurious of the three generations, moving to a more upscale segment to compete against the Land Rover Discovery, but more importantly, to counter its home rival Toyota Land Cruiser's growth. The 3.0 L engine's power was decreased to 130 kW (175 hp/177 PS), and the 3.5 L engine was given gasoline direct injection, increasing power to 162 kW (217 hp/220 PS) in the Japanese market (export versions kept the standard EFI engine, now with 149 kW (200 hp/203 PS). The 2.8 L Diesel was retained only for developing markets, and was replaced by a new 16-valve direct injection engine, with 3.2 L and 120 kW (161 hp/163 PS).

In the North American market, the 3.5 L engine was replaced for 2003 by a more powerful 3.8 L unit, with 160 kW (215 hp/218 PS). This engine was later made available to a few export markets such as South America and Australia, whilst it replaced the GDI V6 in the Japanese lineup in 2005. The short wheelbase model is not available in North America, where the Montero is the only SUV in Mitsubishi's lineup with standard four-wheel drive. Faced with falling sales, the Montero was pulled from the US market after the 2006 model year.

The fourth generation was introduced at the Paris Motor Show on September 30, 2006. New interior and exterior styling were accompanied by enhanced safety with dual-stage SRS front airbags as well as new side-impact and curtain airbags. The Super-Select 4WD II system was retained, complemented by an improved Active Stability & Traction Control (ASTC) system and electronic brakeforce distribution. With skid plates, heavy weight components and 8.7 inches of ground clearance the vehicle retains its reputation as one of the toughest and most capable 4x4s. [5]

For the 2010 model year the Pajero gained a Rockford acoustic soundsystem and two interior color options, black and beige, in some markets.