An intercooler (original UK term, sometimes aftercooler in US practice), or charge air cooler, is an air-to-air or air-to-liquid heat exchange device used on turbocharged and supercharged (forced induction) internal combustion engines to improve their volumetric efficiency by increasing intake air charge density through nearly isobaric (constant pressure) cooling, which removes the heat of compression (i.e., the temperature rise) that occurs in any gas when its pressure is raised or its unit mass per unit volume (density) is increased. A decrease in intake air charge temperature sustains use of a more dense intake charge into the engine, as a result of supercharging. The lowering of the intake charge air temperature also eliminates the danger of pre-detonation (knock) of the fuel air charge prior to timed spark ignition. Thus preserving the benefits of more fuel/air burn per engine cycle, increasing the output of the engine. Intercoolers increase the efficiency of the induction system by reducing induction air heat created by the turbocharger and promoting more thorough combustion. They also eliminate the need for using the wasteful method of lowering intake charge temperature by the injection of excess fuel into the cylinders' air induction chambers, to cool the intake air charge, prior to its flowing into the cylinders. This wasteful practice (when intercoolers are not used) nearly eliminated the gain in engine efficiency from supercharging, but was necessitated by the greater need to prevent at all costs the engine damage that pre-detonation engine knocking causes.[1]

The inter prefix in the device name originates from historic compressor designs. In the past, aircraft engines were built with charge air coolers that were installed between multiple stages of supercharging,[citation needed] thus the designation of inter. Modern automobile designs are technically designated aftercoolers because of their placement at the end of supercharging chain. This term is now considered archaic in modern automobile terminology since most forced induction vehicles have single-stage superchargers or turbochargers although "aftercooler" is still in common use in the piston engined aircraft industry. In a vehicle fitted with two-stage turbocharging, it is possible to have both an intercooler (between the two turbocharger units) and an aftercooler (between the second-stage turbo and the engine). The JCB Dieselmax land speed record-holding car is an example of such a system. In general, an intercooler or aftercooler is said to be a charge air cooler.

Intercoolers can vary dramatically in size, shape and design, depending on the performance and space requirements of the entire supercharger system. Common spatial designs are front mounted intercoolers (FMIC), top mounted intercoolers (TMIC) and hybrid mount intercoolers (HMIC). Each type can be cooled with an air-to-air system, air-to-liquid system, or a combination of both. 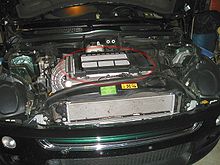 The engine bay of a 2003 MINI Cooper S—the top mounted intercooler is circled in red. 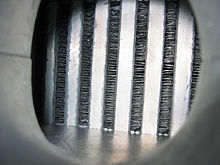 Interior close up view of an air to air intercooler.

Exterior of the same intercooler core.

Turbochargers and superchargers are engineered to force more air mass into an engine's intake manifold and combustion chamber. Intercooling is a method used to compensate for heating caused by supercharging, a natural byproduct of the semi-adiabatic compression process. Increased air pressure can result in an excessively hot intake charge, significantly reducing the performance gains of supercharging due to decreased density. Increased intake charge temperature can also increase the cylinder combustion temperature, causing detonation, excessive wear, or heat damage to an engine block.

Passing a compressed and heated intake charge through an intercooler reduces its temperature (due to heat rejection) and pressure (due to flow restriction of fins). If properly engineered, the relative decrease in temperature is greater than the relative loss in pressure, resulting a net increase in density. This increases system performance by recovering some losses of the inefficient compression process by rejecting heat to the atmosphere. Additional cooling can be provided by externally spraying a fine mist onto the intercooler surface, or even into the intake air itself, to further reduce intake charge temperature through evaporative cooling.

Intercoolers that exchange their heat directly with the atmosphere are designed to be mounted in areas of an automobile with maximum air flow. These types are mainly mounted in front mounted systems (FMIC). Cars such as the Nissan Skyline, Saab, Volvo 200 Series Turbo, Volvo 700 Series (and 900 series) turbo, Dodge SRT-4, 1st gen Mazda MX-6, Mitsubishi Lancer Evolution and Chevrolet Cobalt SS all use front mounted intercooler(s) mounted near the front bumper, in line with the car's radiator.

Many other turbo-charged cars, particularly where the aesthetics of the car are not to be compromised by unattractive top mount scoops, such as the Toyota Supra (JZA80 only), Nissan 300ZX Twin Turbo, Nissan 200SX (S13/14/14a/15), Mitsubishi 3000gt, Saab 900, Volkswagen, Audi TT, and Turbo Mitsubishi Eclipse use side-mounted air-to-air intercoolers (SMIC), which are mounted in the front corner of the bumper or in front of one of the wheels. Side-mounted intercoolers are generally smaller, mainly due to space constraints, and sometimes two are used to gain the performance of a larger, single intercooler. Cars such as the Subaru Impreza WRX, MINI Cooper S, Toyota Celica GT-Four, Nissan Pulsar GTI-R, Mazdaspeed3, Mazdaspeed6, and the PSA Peugeot Citroën turbo diesels, use air-to-air top mounted intercoolers (TMIC) located on top of the engine. Air is directed through the intercooler through the use of a hood scoop. In the case of the PSA cars the air flows through the grille above the front bumper, then through under-hood ducting. Top mounted intercoolers sometimes suffer from heat diffusion due to proximity with the engine, warming them and reducing their overall efficiency. Some World Rally Championship cars use a reverse-induction system design whereby air is forced through ducts in the front bumper to a horizontally-mounted intercooler.

Fitting an after market front mount intercooler to a car with a factory installed top mount.

Because FMIC systems require open bumper design for optimal performance, the entire system is vulnerable to debris. Some engineers choose other mount locations due to this reliability concern. FMICs can be located in front of or behind the radiator, depending on the heat dissipation needs of the engine.

As well as allowing a greater mass of air to be admitted to an engine, intercoolers have a key role in controlling the internal temperatures in a turbocharged engine. When fitted with a turbo (as with any form of supercharging), the engine's specific power is increased, leading to higher combustion and exhaust temperatures. The exhaust gases passing through the turbine section of the turbocharger are usually around 450 °C (840 °F), but can be as high as 1000 °C (1830 °F) under extreme conditions. This heat passes through the turbocharger unit and contributes to the heating of the air being compressed in the compressor section of the turbo. If left uncooled this hot air enters the engine, further increasing internal temperatures. This leads to a build up of heat that will eventually stabilise, but this may be at temperatures in excess of the engine's design limits- 'hot spots' at the piston crown or exhaust valve can cause warping or cracking of these components. This effect is especially found in modified or tuned engines running at very high specific power outputs. An efficient intercooler removes heat from the air in the induction system, preventing the cyclic heat build-up via the turbocharger, allowing higher power outputs to be achieved without damage.

Compression by the turbocharger causes the intake air to heat up; rather than the air being heated by contact with the hot turbocharger itself, the vast majority is through the act of compression (ideal gas law) plus added heat due to compressor inefficiencies (adiabatic efficiency). The extra power obtained from forced induction is due to the extra air available to burn more fuel in each cylinder. This sometimes requires a lower compression ratio be used, to allow a wider mapping of ignition timing advance before detonation occurs (for a given fuel's octane rating). On the other hand, a lower compression ratio generally lowers combustion efficiency and costs power.

Air-to-liquid intercoolers (aka Charge-Air-Coolers) are heat exchangers that transfer intake charge heat to an intermediate fluid, usually water, which finally rejects heat to the air. These systems use radiators in other locations, usually due to space constraints, to reject unwanted heat, similar to an automotive radiator cooling system. Air-to-liquid intercoolers are usually heavier than their air-to-air counterparts due to additional components making up the system (water circulation pump, radiator, fluid, and plumbing). The Toyota Celica GT-Four had this system from 1988 to 1989, 1994 to 1999, also in the Carlos Sainz Rally Championship Version from 1990 to 1993. The 1989-1993 Subaru Legacy with the 2.0 L DOHC flat-4 engine also used a top installed air-to-water intercooler on the GT and RS models sold in Japan, Europe, and Australia.

A big advantage of the air-to-liquid setup is the lower overall pipe and intercooler length, which offers faster response (lowers turbo lag)[citation needed], giving peak boost faster than most front-mount intercooler setups. Some setups can use reservoirs that can have ice put into it for intake temperatures lower than ambient air, giving a big advantage (but of course, ice would need constant replacement).

Ford had adopted the technology when they decided to use forced induction (via Supercharger) on their Mustang Cobra and Ford Lightning truck platforms. It uses a water/glycol mixture intercooler inside the intake manifold, just under the supercharger, and has a long heat exchanger front mounted, all powered by a Bosch pump made for Ford. Ford still uses this technology today with their Shelby GT500. The 2005-2007 Chevrolet Cobalt SS Supercharged also utilizes a similar setup.

Air-to-liquid intercoolers are by far the most common form of intercooler found on marine engines, given that a limitless supply of cooling water is available and most engines are located in closed compartments where obtaining a good flow of cooling air for an air-to-air unit would be difficult. Marine intercoolers take the form of a tubular heat exchanger with the air passing through a series of tubes and cooling water circulating around the tubes within the unit's casing. The source of water for the intercooler depends on the exact cooling system fitted to the engine. Most marine engines have fresh water circulating within them which is passed through a heat exchanger cooled by sea water. In such a system the intercooler will be attached to the sea water circuit and placed before the engine's own heat exchanger to ensure a supply of cool water.