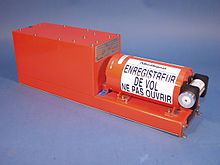 An example of a flight data recorder; the underwater locator beacon is the small cylinder on the far right. (English translation of warning message: FLIGHT RECORDER DO NOT OPEN)

A flight data recorder (FDR) (also ADR, for accident data recorder) is an electronic device employed to record any instructions sent to any electronic systems on an aircraft. It is a device used to record specific aircraft performance parameters. Another kind of flight recorder is the cockpit voice recorder (CVR), which records conversation in the cockpit, radio communications between the cockpit crew and others (including conversation with air traffic control personnel), as well as ambient sounds. In this both functions have been combined into a single unit. The current applicable FAA TSO is C124b titled Flight Data Recorder Systems.[1]

Popularly referred to as a "black box", the data recorded by the FDR is used for accident investigation, as well as for analyzing air safety issues, material degradation and engine performance. Due to their importance in investigating accidents, these ICAO-regulated devices are carefully engineered and stoutly constructed to withstand the force of a high speed impact and the heat of an intense fire. Contrary to the "black box" reference, the exterior of the FDR is coated with heat-resistant bright orange paint for high visibility in wreckage, and the unit is usually mounted in the aircraft's empennage (tail section), where it is more likely to survive a severe crash. Following an accident, the recovery of the FDR is usually a high priority for the investigating body, as analysis of the recorded parameters can often detect and identify causes or contributing factors.[2]

As with many successful people that made devices, probably no single person could be credited with the invention of the flight data recorder. However, one of the earliest and proven attempts was made by François Hussenot and Paul Beaudouin in 1939 at the Marignane flight test center, France, with their "type HB" flight recorder. This was an essentially photograph-based device, because the record was made on a scrolling eight meters long by 88 milimeters wide photographic film. The latent image was made by a thin ray of light deviated by a mirror tilted according to the magnitude of the data to record (altitude, speed, etc.).[3][4] A pre-production run of 25 "HB" recorders was ordered in 1941 and HB recorders remained in use in French test centers well into the seventies[5] In 1947, Hussenot, Beaudouin and associate Marcel Ramolfo founded the Société Française d'Instruments de Mesure (SFIM) to market their design. This company went on to become a major supplier of data recorders, used not only aboard aircraft but also trains and other vehicles. SFIM is today part of the Safran group and is still present on the flight recorder market.

The advantage of the film technology was that it could be easily developed afterwards and provides a durable, visual feedback of the flight parameters without needing any playback device. On the other hand, unlike magnetic bands or later flash memory-based technology, a photographic film cannot be erased and recycled, and so it must be changed periodically. As such, this technology was reserved for one-shot uses, mostly during planned test flights; and it was not mounted aboard civilian aircraft during routine commercial flights. Also, the cockpit conversation was not recorded.

Another form of flight data recorder was developed in the UK during World War II. Len Harrison and Vic Husband developed a unit that could withstand a crash and fire to keep the flight data intact. This unit used copper foil as the recording medium with various styli indicating various instruments / aircraft controls which indented the copper foil. The copper foil was periodically advanced at set periods of time therefore giving a history of the instruments /control settings of the aircraft. This unit was developed at Farnborough for the Ministry of Aircraft Production. At the wars end the Ministry got Harrison and Husband to sign over their invention to them and the Ministry patented it under British patent 19330/45. This unit was the forerunner of today's black boxes being able to withstand conditions that aircrew could not.

The first prototype coupled FDR/CVR designed with civilian aircraft in mind, for explicit post-crash examination purposes, was produced in 1956 by Dr. David Warren of the Defence Science and Technology Organisation's Aeronautical Research Laboratories in Melbourne, Australia.[6] In 1953 and 1954, a series of fatal accidents involving the de Havilland Comet prompted the grounding of the entire fleet pending an investigation. Dr. Warren, a chemist specializing in aircraft fuels, was involved in a professional committee discussing the possible causes. Since there had been neither witnesses nor survivors, Dr. Warren conceived of a crash-survivable method to record the flight crew's conversation (and other pre-crash data), reasoning they would greatly assist in determining a cause and enabling the prevention of future, avoidable accidents of the same type.

Warren published a 1954 report entitled "A Device for Assisting Investigation into Aircraft Accidents" and built a 1957 prototype FDR called "The ARL Flight Memory Unit". However, aviation authorities from around the world were largely uninterested. This changed in 1958 when Sir Robert Hardingham, the Secretary of the British Air Registration Board, visited the ARL and was introduced to Warren.

The Aeronautical Research Laboratory allocated Dr. Warren an engineering team to develop the prototype to airborne stage. The team, consisting of electronics engineers Lane Sear, Wally Boswell and Ken Fraser developed a working design incorporating a fire and shockproof case, a reliable system for encoding and recording aircraft instrument readings and voice on one wire, and a ground-based decoding device. The ARL system became the "Red Egg", made by the British firm of S. Davall & Son. The "Red Egg" got its name from its shape and bright red color. In 1960, after the crash of an aircraft at Mackay (Queensland), the inquiry judge strongly recommended that flight recorders be installed in all airliners. Australia then became the first country in the world to make cockpit-voice recording compulsory.[7][8]

The origin of the term "Black Box" is uncertain. One explanation comes from the early film-based design of flight data recorders, which required the inside of the recorder to be perfectly dark to prevent light leaks from corrupting the record, as in a photographer's darkroom.[9] Another explanation of the "black box" name came from a meeting about Warren's "Red Egg", when afterwards a journalist told Dr. Warren, "This is a wonderful black box." The unit itself was based on an EMI Minifon wire recorder (originally a 1950s espionage gadget from the west-German manufacterer Protona Monske) fitted into a perspex box firmly screwed together.[citation needed]

The design of today's FDR is governed by the internationally recognized standards and recommended practices relating to flight recorders which are contained in ICAO Annex 6 which makes reference to industry crashworthiness and fire protection specifications such as those to be found in the European Organisation for Civil Aviation Equipment[10] documents EUROCAE ED55, ED56 fiken A and ED112 (Minimum Operational Performance Specification for Crash Protected Airborne Recorder Systems). In the United States, the Federal Aviation Administration (FAA) regulates all aspects of U.S. aviation, and cites design requirements in their Technical Standard Order,[11] based on the EUROCAE documents (as do the aviation authorities of many other countries).

After the crash of Gol Transportes Aéreos Flight 1907, Brazilian Air Force personnel recover the flight data recorder of PR-GTD, the Boeing 737-8EH used for the flight, in the Amazon Rainforest in Mato Grosso, Brazil.

Currently, EUROCAE specifies that a recorder must be able to withstand an acceleration of 3400 g (33 km/s²) for 6.5 milliseconds. This is roughly equivalent to an impact velocity of 270 knots (310 mph) and a deceleration or crushing distance of 450 cm. Additionally, there are requirements for penetration resistance, static crush, high and low temperature fires, deep sea pressure, sea water immersion, and fluid immersion.

Modern day FDRs receive inputs via specific data frames from the Flight Data Acquisition Units (FDAU). They record significant flight parameters, including the control and actuator positions, engine information and time of day. There are 88 parameters required as a minimum under current U.S. federal regulations (only 29 were required until 2002), but some systems monitor many more variables. Generally each parameter is recorded a few times per second, though some units store "bursts" of data at a much higher frequency if the data begins to change quickly. Most FDRs record approximately 17–25 hours worth of data in a continuous loop. It is required by regulations that an FDR verification check (readout) is performed annually in order to verify that all mandatory parameters are recorded.

This has also given rise to flight data monitoring programs, whereby flights are analyzed for optimum fuel consumption and dangerous flight crew habits. The data from the FDR is transferred, in situ, to a solid state recording device and then periodically analyzed with some of the same technology used for accident investigations. In other cases the data is downloaded from the aircraft's Quick Access Recorder (Quick access recorder), either by transfer to a portable solid state recording device or by direct upload to the operator's headquarters via radio or satellite.

FDRs are usually located in the rear of the aircraft, typically in the tail. In this position, the entire front of the aircraft is expected to act as a "crush zone" to reduce the shock that reaches the recorder. Also, modern FDRs are typically double wrapped, in strong corrosion-resistant stainless steel or titanium, with high-temperature insulation inside. They are usually bright orange. They are designed to emit a locator beacon for up to 30 days, and can operate immersed to a depth of up to 6,000 meters (20,000 ft).[12][13]

This article incorporates public domain material from websites or documents of the National Transportation Safety Board.