Aileron
For the band, see The Ailerons.

An aircraft rolling with its ailerons

Ailerons are hinged flight control surfaces attached to the trailing edge of the wing of a fixed-wing aircraft. The ailerons are used to control the aircraft in roll, which results in a change in heading due to the tilting of the lift vector. The two ailerons are typically interconnected so that one goes down when the other goes up: the down-going aileron increases the lift on its wing while the up-going aileron reduces the lift on its wing, producing a rolling moment about the aircraft's longitudinal axis. [1] Ailerons are usually situated near the wing tip, but may sometimes be situated nearer the wing root. The terms "outboard aileron" and "inboard aileron" are used to describe these positions respectively. The word aileron is French for "little wing".

An unwanted side effect of aileron operation is adverse yaw—a yawing moment in the opposite direction to the roll. Using the ailerons to roll an aircraft to the right produces a yawing motion to the left. As the aircraft rolls, adverse yaw is caused primarily by the change in drag on the left and right wing. The rising wing generates increased lift, which causes increased induced drag. The descending wing generates reduced lift, which causes reduced induced drag. The difference in drag on each wing produces the adverse yaw. There is also often an additional adverse yaw contribution from a difference in profile drag between the up-aileron and down-aileron.

Adverse yaw is effectively compensated by the use of the rudder, which results in a sideforce on the vertical tail that opposes the adverse yaw by creating a favorable yawing moment. Another method of compensation is differential ailerons, which have been rigged such that the downgoing aileron deflects less than the upgoing one. In this case the opposing yaw moment is generated by a difference in profile drag between the left and right wingtips. Frise ailerons accentuate this profile drag imbalance by protruding beneath the wing of an upward-deflected aileron, most often by being hinged slightly behind the leading edge and near the bottom of the surface, with the lower section of the leading edge protruding slightly below the wing's undersurface when the aileron is deflected upwards, substantially increasing profile drag on that side. Ailerons may also be designed to use a combination of these methods.[1]

With ailerons in the neutral position, the wing on the outside of the turn develops more lift than the opposite wing due to the variation in airspeed across the wing span, which tends to cause the aircraft to continue to roll. Once the desired angle of bank (degree of rotation on the longitudinal axis) is obtained, the pilot uses opposite aileron to prevent the angle of bank from increasing due to this variation in lift across the wing span. This minor opposite use of the control must be maintained throughout the turn. The pilot also uses a slight amount of rudder in the same direction as the turn to counteract adverse yaw and to produce a "coordinated" turn wherein the fuselage is parallel to the flight path. A simple gauge on the instrument panel called the slip indicator, also known as "the ball", indicates when this coordination is achieved.[1] 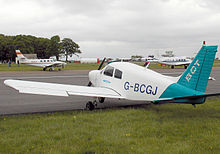 Ailerons are the trailing-edge control surface nearest the wing tip (although on some airliners they can also be found at the wing root). On this parked Piper Cherokee, the left aileron has deflected downward, and the right, upward.

The aileron came into widespread use well after the rudder and elevator. The Wright Brothers used wing warping instead of ailerons for roll control, and initially, their aircraft had much better control in the air than aircraft that used movable surfaces; however, as aileron designs were refined, and aircraft became larger and heavier, it became clear that they were much more effective and practical for most aircraft.

There are conflicting claims over who first invented the aileron. In 1868, before the advent of powered aircraft, English inventor Matthew Piers Watt Boulton patented the first aileron-type device for lateral control via 'flexed' wings.[2][3][4] Boulton's patent, No. 392, awarded in 1868 some 40 years before ailerons were 'reinvented', became forgotten until the aileron was in general use.[5] If the Boulton device had been revealed at the time of the Wright Brother's patent filings, they may not have been able to claim priority of invention for lateral control of flying machines.[6]

New Zealander Richard Pearse may have made a powered flight in a monoplane that included small ailerons as early as 1902, but his claims are controversial (and sometimes inconsistent), and, even by his own reports, his aircraft were not well controlled.

The 14 Bis airplane, by Santos Dumont, was modified to add ailerons in late 1906, though it was never fully controllable in flight, likely due to its unconventional wing form.

Henry Farman's ailerons on the Farman III were the first to resemble ailerons on modern aircraft, and have a reasonable claim as the ancestor of the modern aileron.[3]

In 1908 U.S. inventor, businessman and engine builder Glenn Curtiss flew an aileron-controlled aircraft. However Curtiss had previously been a member of the Aerial Experiment Association, headed by Alexander Graham Bell. The Association had previously developed ailerons for their aircraft.[3] The AEA members were later dismayed when Curtiss dropped out of their organization, patented their innovation and reportedly sold the patent to the United States Government.

Another contestant includes Dr. William Whitney Christmas of the U.S., who claimed to have invented an aileron in the 1914 patent for what would become the Christmas Bullet, which was built in 1918.[8]

To prevent control surface flutter (aeroelastic flutter), the center of lift of the control surface should be behind the center of gravity of that surface. To achieve this, lead weights may be added to the front of the aileron. In some aircraft the aileron construction may be too heavy to allow this system to work without huge weight increases. In this case, the weight may be added to a lever arm to move the weight well out in front to the aileron body. These balance weights are tear drop shapes (to reduce drag), which make them appear quite different from spades, although both project forward and below the aileron. In addition to reducing flutter, mass balances also reduce the stick forces required to move the control surface in flight.

Used during the First World War and before, these ailerons were each controlled by a single cable, which pulled the aileron up. When the aircraft was at rest, the ailerons hung vertically down. This type of aileron was used on the Short 166. One of the disadvantages of this setup was a greater tendency to yaw than even with basic interconnected ailerons.[9] During the 1930's a number of light aircraft used single acting controls but used springs to return the ailerons to their neutral positions when the stick was released.

By careful design of the mechanical linkages, the up aileron can be made to deflect more than the down aileron (e.g., US patent 1565097).[10] This helps reduce the likelihood of a wing tip stall when aileron deflections are made at high angles of attack. The idea is that the loss of lift associated with the up aileron carries no penalty while the increase in lift associated with the down aileron is minimized. The rolling couple on the aircraft is always the difference in lift between the two wings. The de Havilland Tiger Moth classic British biplane is one of the best-known aircraft, and one of the earliest, to use differential ailerons.

Combinations with other control surfaces

Some aircraft have used differentially controlled spoilers or spoilerons to provide roll instead of conventional ailerons. The advantage is that the entire trailing edge of the wing may be devoted to flaps, providing better low speed control. The Northrop P-61 Black Widow used spoilers in this manner, in conjunction with full span zap flaps and some modern airliners use spoilers to assist the ailerons

Not Ailerons, but doing the same job

On the earliest aircraft, such as the Wright Flyer, lateral control was effected by twisting the outboard portion of the wing so as to increase or decrease lift by changing the angle of attack. This had the disadvantages of stressing the structure, being heavy on the controls, and of risking stalling the side with the increased angle of attack during a maneuver. By 1915, few aircraft used wing warping.

Spoilers are devices that when extended into the airflow over a wing, disrupt the airflow and reduce the amount of lift generated. A small number of aircraft have used spoilers in lieu of, or to supplement ailerons, such as the Northrop P-61 Black Widow, whose entire trailling edge was occupied with full span flaps.

In flexible wings, much or all of a wing surface can change shape in flight to deflect air flow. The X-53 Active Aeroelastic Wing is a NASA effort. The Adaptive Compliant Wing is a military and commercial effort.[11][12][13]

In fluidics, forces in vehicles occur via circulation control, in which larger more complex mechanical parts are replaced by smaller simpler fluidic systems (slots that emit air flows) where larger forces in fluids are diverted by smaller jets or flows of fluid intermittently, to change the direction of vehicles.[14][15][16] In this use, fluidics promises lower mass, costs (up to 50% less), and very low inertia and response times, and simplicity.