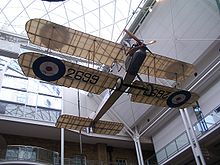 Aircraft dope is a plasticised lacquer that is applied to fabric-covered aircraft. It tautens and stiffens fabric stretched over airframes and renders them airtight and weatherproof.[1]

Typical doping agents include nitrocellulose, cellulose acetate and cellulose acetate butyrate. Liquid dopes are highly flammable; nitrocellulose, for instance, is also known as the explosive propellant "guncotton". Dopes will often include colouring pigments to facilitate even application. The colour will usually be red or silver.[citation needed]

Dope has been applied to various aircraft fabrics but typically to Madapolam or fabric with similar fine weave and absorbent qualities. In model aircraft it is often applied to tissue paper.[citation needed]

Accidents have occurred when dope is not used correctly, for example when mixed with other chemicals, used on the wrong fabrics or applied to contaminated or improperly prepared surfaces.