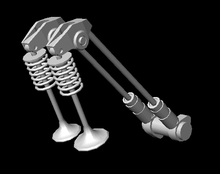 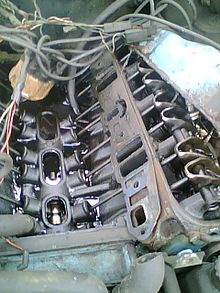 Picture of a V8 engine block (with intake manifold removed), showing the camshaft, pushrods, and rockers.

An overhead valve (OHV) engine, also informally called pushrod engine or I-head engine, is a type of piston engine that places the camshaft within the cylinder block (usually beside and slightly above the crankshaft in a straight engine or directly above the crankshaft in the V of a V engine), and uses pushrods or rods to actuate rocker arms above the cylinder head to actuate the valves. Lifters or tappets are located in the engine block between the camshaft and pushrods.[1] The more modern overhead camshaft (OHC) design (still literally overhead valve) avoids the use of pushrods by putting the camshaft in the cylinder head.

In 1949, Oldsmobile introduced the Rocket V8. It was the first high-compression I-head design, and is the archetype for most modern pushrod engines. General Motors is the world's largest pushrod engine producer[citation needed], producing both V6 and V8 pushrod engines.

Few pushrod type engines remain in production outside of the United States market, and even American manufacturer Ford no longer offers pushrod engines in new vehicles. This is in part a result of some countries passing laws to tax engines based on displacement, because displacement is somewhat related to the emissions and fuel efficiency of an automobile. This has given OHC engines a regulatory advantage in those countries, which resulted in few manufacturers wanting to design both OHV and OHC engines.

However, in 2002, Chrysler introduced a new pushrod engine: a 5.7 litre Hemi engine. The new Chrysler Hemi engine presents advanced features such as variable displacement technology and has been a popular option with buyers. The Hemi was on the Ward's 10 Best Engines list for 2003 through 2007. Chrysler also produced the world's first production variable valve OHV engine with independent intake and exhaust phasing. The system is called CamInCam,[2] and was first used in the 600 horsepower (447 kW) SRT-10 engine for the 2008 Dodge Viper.

In automotive engineering, an overhead valve internal combustion engine is one in which the intake and exhaust valves and ports are contained within the cylinder head.

The original overhead valve or OHV piston engine was developed by the Scottish-American David Dunbar Buick. It employs pushrod-actuated valves parallel to the pistons, and this is still in use today. This contrasts with previous designs which made use of side valves and sleeve valves.

Some specific problems that remain with overhead valve (OHV) engines:

Modern OHV engines are usually limited to about 6,000 to 8,000 revolutions per minute (rpm) in production cars, and 9,000 rpm to 10,500 rpm in racing applications. In contrast, many modern DOHC engines may have rev limits from 6,000 rpm to 9,000 rpm in road car engines, and in excess of 20,000 rpm (though now limited to 18,000 rpm) in current Formula One race engines using pneumatic valve springs. High-revving pushrod engines are normally solid (mechanical) lifter designs, flat and roller. In 1969, Chevrolet offered a Corvette and a Camaro model with a solid lifter cam pushrod V8 (the ZL-1) that could rev to 8,000 rpm. The Volvo B18 and B20 engines can rev to more than 7,000 rpm with their solid lifter camshaft. However, the LS7 of the C6 Corvette Z06 is the first production hydraulic roller cam pushrod engine to have a redline of 7,100 rpm.

The Indy 500 race in Indianapolis each year bears some vestige of its original purpose as a proving ground for automobile manufacturers, in that it once gave an advantage in engine displacement to engines based on stock production engines, as distinct from out-and-out racing engines designed from scratch. One factor in identifying production engines from racing engines was the use of pushrods, rather than the overhead camshafts used on most modern racing engines; Mercedes-Benz realized before the 1994 race that they could very carefully tailor a purpose-built racing engine using pushrods to meet the requirements of the Indy rules and take advantage of the 'production based' loophole, but still design it to be a state of the art racing engine in all other ways, without any of the drawbacks of a real production-based engine. They entered this engine in 1994, and because of the higher boost pressure and larger displacement that the "loophole" allowed pushrod engines, dominated the race. After the race, the rules were changed in order to reduce the amount of boost pressure supplied by the turbocharger. This amount was still 13% higher than what was allowed for the OHC engines, the engine was also allowed to retain its considerable displacement advantage. The inability of the engine to produce competitive power output after this change caused it to become obsolete after just the one race. Mercedes-Benz knew this beforehand, deciding that the cost of engine development was worth one win at Indianapolis.