A gas compressor is a mechanical device that increases the pressure of a gas by reducing its volume.

Compressors are similar to pumps: both increase the pressure on a fluid and both can transport the fluid through a pipe. As gases are compressible, the compressor also reduces the volume of a gas. Liquids are relatively incompressible, while some can be compressed, the main action of a pump is to pressurize and transport liquids.

The main types of gas compressors are illustrated and discussed below: 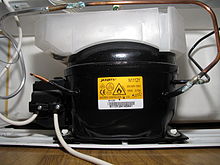 A small hermetically sealed compressor in a common consumer refrigerator or freezer; it typically has a rounded steel outer shell that is permanently welded shut, and which seals operating gases inside the system. There is no route for gases to leak, such as around motor shaft seals. On this model, the plastic top section is part of an auto-defrost system which uses motor heat to evaporate the water.

Compressors are often described as being either open, hermetic, or semi-hermetic, to describe how the compressor and motor drive is situated in relation to the gas or vapour being compressed. The industry name for a hermetic is hermetically sealed compressor, while a semi- is commonly called a semi-hermetic compressor.

In hermetic and most semi-hermetic compressors, the compressor and motor driving the compressor are integrated, and operate within the pressurized gas envelope of the system. The motor is designed to operate and be cooled by the gas or vapour being compressed.

The primary advantage of a hermetic and semi-hermetic is that there is no route for the gas to leak out of the system. Open compressors rely on either natural leather or synthetic rubber seals to retain the internal pressure, and these seals require a lubricant such as oil to retain their sealing properties.

An open pressurized system such as an automobile air conditioner can leak its operating gases, if it is not operated frequently enough. Open systems rely on lubricant in the system to splash on pump components and seals. If it is not operated frequently enough, the lubricant on the seals slowly evaporates, and then the seals begin to leak until the system is no longer functional and must be recharged. By comparison, a hermetic system can sit unused for years, and can usually be started up again at any time without requiring maintenance or experiencing any loss of system pressure.

The disadvantage of hermetic compressors is that the motor drive cannot be repaired or maintained, and the entire compressor must be removed if a motor fails. A further disadvantage is that burnt out windings can contaminate whole systems requiring the system to be entirely pumped down and the gas replaced. Typically hermetic compressors are used in low-cost factory-assembled consumer goods where the cost of repair is high compared to the value of the device, and it would be more economical to just purchase a new device.

An advantage of open compressors is that they can be driven by non-electric power sources, such as an internal combustion engine or turbine. However, open compressors that drive refrigeration systems are generally not totally maintenance free throughout the life of the system, since some gas leakage will occur over time.

Centrifugal compressors use a rotating disk or impeller in a shaped housing to force the gas to the rim of the impeller, increasing the velocity of the gas. A diffuser (divergent duct) section converts the velocity energy to pressure energy. They are primarily used for continuous, stationary service in industries such as oil refineries, chemical and petrochemical plants and natural gas processing plants.[1][2][3] Their application can be from 100 horsepower (75 kW) to thousands of horsepower. With multiple staging, they can achieve extremely high output pressures greater than 10,000 psi (69 MPa).

Many large snowmaking operations (like ski resorts) use this type of compressor. They are also used in internal combustion engines as superchargers and turbochargers. Centrifugal compressors are used in small gas turbine engines or as the final compression stage of medium sized gas turbines. Sometimes the capacity of the compressors is written in NM3/hr. Here 'N' stands for normal temperature pressure (20°C and 1 atm ) for example 5500 NM3/hr.

Diagonal or mixed-flow compressors are similar to centrifugal compressors, but have a radial and axial velocity component at the exit from the rotor. The diffuser is often used to turn diagonal flow to an axial rather than radial direction.

An animation of an axial compressor.

Axial-flow compressors are dynamic rotating compressors that use arrays of fan-like airfoils to progressively compress the working fluid. They are used where there is a requirement for a high flow rate or a compact design.

The arrays of airfoils are set in rows, usually as pairs: one rotating and one stationary. The rotating airfoils, also known as blades or rotors, accelerate the fluid. The stationary airfoils, also known as stators or vanes, decelerate and redirect the flow direction of the fluid, preparing it for the rotor blades of the next stage.[1] Axial compressors are almost always multi-staged, with the cross-sectional area of the gas passage diminishing along the compressor to maintain an optimum axial Mach number. Beyond about 5 stages or a 4:1 design pressure ratio, variable geometry is normally used to improve operation.

Axial compressors can have high efficiencies; around 90% polytropic at their design conditions. However, they are relatively expensive, requiring a large number of components, tight tolerances and high quality materials. Axial-flow compressors can be found in medium to large gas turbine engines, in natural gas pumping stations, and within certain chemical plants. 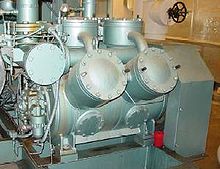 A motor-driven six-cylinder reciprocating compressor that can operate with two, four or six cylinders.

Diagram of a rotary screw compressor

Rotary screw compressors use two meshed rotating positive-displacement helical screws to force the gas into a smaller space.[1][7][8] These are usually used for continuous operation in commercial and industrial applications and may be either stationary or portable. Their application can be from 3 horsepower (2.2 kW) to over 1,200 horsepower (890 kW) and from low pressure to moderately high pressure (>1,200 psi or 8.3 MPa).

Rotary vane compressors consist of a rotor with a number of blades inserted in radial slots in the rotor. The rotor is mounted offset in a larger housing which can be circular or a more complex shape. As the rotor turns, blades slide in and out of the slots keeping contact with the outer wall of the housing.[1] Thus, a series of decreasing volumes is created by the rotating blades. Rotary Vane compressors are, with piston compressors one of the oldest of compressor technologies.

With suitable port connections, the devices may be either a compressor or a vacuum pump. They can be either stationary or portable, can be single or multi-staged, and can be driven by electric motors or internal combustion engines. Dry vane machines are used at relatively low pressures (e.g., 2 bar or 200 kPa; 29 psi) for bulk material movement while oil-injected machines have the necessary volumetric efficiency to achieve pressures up to about 13 bar (1,300 kPa; 190 psi) in a single stage. A rotary vane compressor is well suited to electric motor drive and is significantly quieter in operation than the equivalent piston compressor.

Rotary vane compressors can have mechanical efficiencies of about 90%.[9]

Mechanism of a scroll pump

A scroll compressor, also known as scroll pump and scroll vacuum pump, uses two interleaved spiral-like vanes to pump or compress fluids such as liquids and gases. The vane geometry may be involute, archimedean spiral, or hybrid curves.[10][11][12] They operate more smoothly, quietly, and reliably than other types of compressors in the lower volume range.

Often, one of the scrolls is fixed, while the other orbits eccentrically without rotating, thereby trapping and pumping or compressing pockets of fluid or gas between the scrolls.

This type of compressor was used as the supercharger on Volkswagen G60 and G40 engines in the early 1990s.

The degree of flexing and the material constituting the diaphragm affects the maintenance life of the equipment. Generally stiff metal diaphragms may only displace a few cubic centimeters of volume because the metal can not endure large degrees of flexing without cracking, but the stiffness of a metal diaphragm allows it to pump at high pressures. Rubber or silicone diaphragms are capable of enduring deep pumping strokes of very high flexion, but their low strength limits their use to low-pressure applications, and they need to be replaced as plastic embrittlement occurs.

Diaphragm compressors are used for hydrogen and compressed natural gas (CNG) as well as in a number of other applications. 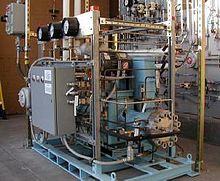 The photograph included in this section depicts a three-stage diaphragm compressor used to compress hydrogen gas to 6,000 psi (41 MPa) for use in a prototype compressed hydrogen and compressed natural gas (CNG) fueling station built in downtown Phoenix, Arizona by the Arizona Public Service company (an electric utilities company). Reciprocating compressors were used to compress the natural gas.

The prototype alternative fueling station was built in compliance with all of the prevailing safety, environmental and building codes in Phoenix to demonstrate that such fueling stations could be built in urban areas.

Also known as a trompe. A mixture of air and water generated through turbulence is allowed to fall into a subterranean chamber where the air separates from the water. The weight of falling water compresses the air in the top of the chamber. A submerged outlet from the chamber allows water to flow to the surface at a lower height than the intake. An outlet in the roof of the chamber supplies the compressed air to the surface. A facility on this principal was built on the Montreal River at Ragged Shutes near Cobalt, Ontario in 1910 and supplied 5,000 horsepower to nearby mines.[13]

Compression of a gas naturally increases its temperature, often referred to as the heat of compression.

with T1 and T2 in degrees Rankine or kelvins, and k = ratio of specific heats (approximately 1.4 for air). Rc is the compression ratio; being the absolute outlet pressure divided by the absolute inlet pressure. The rise in air and temperature ratio means compression does not follow a simple pressure to volume ratio. This is less efficient, but quick. Adiabatic compression or expansion more closely model real life when a compressor has good insulation, a large gas volume, or a short time scale (i.e., a high power level). In practice there will always be a certain amount of heat flow out of the compressed gas. Thus, making a perfect adiabatic compressor would require perfect heat insulation of all parts of the machine. For example, even a bicycle tire pump's metal tube becomes hot as you compress the air to fill a tire. The relation between temperature and compression ratio described above means that the value of n for an adiabatic process is k (the ratio of specific heats).

When evaluated, the isothermal work is found to be lower than the adiabatic work.

In the case of centrifugal compressors, commercial designs currently do not exceed a compression ratio of more than a 3.5 to 1 in any one stage (for a typical gas). Since compression generates heat, the compressed gas is to be cooled between stages making the compression less adiabatic and more isothermal. The inter-stage coolers typically result in some partial condensation that is removed in vapor-liquid separators.

In the case of small reciprocating compressors, the compressor flywheel may drive a cooling fan that directs ambient air across the intercooler of a two or more stage compressor.

Because rotary screw compressors can make use of cooling lubricant to remove the heat of compression, they very often exceed a 9 to 1 compression ratio. For instance, in a typical diving compressor the air is compressed in three stages. If each stage has a compression ratio of 7 to 1, the compressor can output 343 times atmospheric pressure (7 × 7 × 7 = 343 atmospheres). (343 atm/34.8 MPa; 5.04 ksi)

There are many options for the "prime mover" or motor which powers the compressor:

Gas compressors are used in various applications where either higher pressures or lower volumes of gas are needed: