The Christmas tree counting down at SIR. Note the blinder, to prevent the driver from being distracted by the light for the other lane.

Drag racing is a competition in which specially prepared automobiles or motorcycles compete two at a time to be the first to cross a set finish line, from a standing start, in a straight line, over a measured distance, most commonly a ¼-mile (402.3-metre / 1,320 ft) straight track.

The race track, known as a dragstrip, uses an electronic timing system to determine the winner.

Before each race (also known as a pass), each driver is allowed to perform a burnout, which heats the driving tires and lays rubber down at the beginning of the track, improving traction. Each driver then lines up (or stages) at the starting line. Races are started electronically by a system known as a Christmas tree. The Christmas tree consists of a column of lights for each driver/lane. In each column, the top two lights are small amber lights (or two halves of an open blue circle split with a bar in the center that lights when the second light has turned on; that form debuted April 15, 2011 at zMax Dragway and became permanent for NHRA National events) [1] connected to light beams on the track, which when broken by the vehicle's front tire(s) indicate that the driver has pre-staged (approximately 7 inches (180 mm) from the starting line) and then staged (at the starting line).[2]

Camaro at launch, with Altered Vision in the right lane. Wheelstand means torque has been wasted lifting the front end, rather than moving the vehicle forward.

Below the staging lights are three large amber lights, a green light, and a red light. When both drivers are staged, the tree is activated to start the race, which causes the three large amber lights to illuminate, followed by the green light. There are two standard light sequences: either the three amber lights flash simultaneously, followed 0.4 seconds later by the green light (a Pro tree), or the ambers light in sequence from top to bottom, 0.5 seconds apart, followed 0.5 seconds later by the green light (a Sportsman tree, or full tree). If the front tires leaves from a stage beam (stage and pre-stage lights both turned off) before the green light illuminates, the red light for that driver's lane illuminates instead, indicating disqualification (unless a more serious violation occurs). Once a driver commits a red-light foul (also known as redlighting), the other driver can also commit a foul start by leaving the line too early but still win, having left later. Should both drivers leave after the green light illuminates, the one leaving first is said to have a holeshot advantage.

In the standard racing format, the losing car and driver are removed from the contest, while the winner goes on to race other winners, until only one is left. 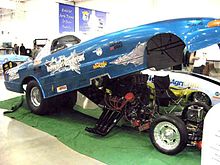 Flopper with body up.

Chief Timer delivering timeslips to competitors after their passes.

The National Hot Rod Association (NHRA) oversees the majority of drag racing events in North America. The next largest organization, Feld Entertainment's International Hot Rod Association (IHRA), is about one-third the size of NHRA. Nearly all drag strips are associated with one sanctioning body or the other. The NHRA is more popular with large, 1/4-mile (402.3-metre / 1,320 ft) nationally recognized tracks (although the two fuel classes have 304.8-metre (1,000 ft) races to reduce top speeds due to safety concerns), while the IHRA is a favorite of smaller 1/8-mile [201.2-metre (660 ft)] local tracks (and offers selected races on their national tour under the 1/8-mile format). One reason for this (among others) is the IHRA is less restrictive in its rules, such as rules on nitrous oxide (legal in Pro Modified) and oversized engines (no 500-cubic-inch (8.2 L) restriction in the IHRA's Pro Stock category) and less expensive to be associated.

In the midwest, there are several small organizations that have been active in drag racing for several years. One that is notable and well established is Nostalgia Pro Comp Association. They feature old school dragsters and muscle cars, under numerous classes to choose from. The majority of the tracks they race are 1/8-mile and 1/4-mile.

Drag racing is permitted on Main Street in Worcester, Massachusetts during the New England Summer Nationals.

The British Hot Rod Association (BHRA) was established in 1960, with the intent of unifying local clubs and holding organised Drag Races at disused airfields like Duxford and Graveley.[4]

The first Australian Nationals event was run in 1965 at Riverside raceway, near Melbourne. The Australian National Drag Racing Association (ANDRA) was established in 1973, and today they claim they are the "best in the world outside the United States".[5] ANDRA sanctions races throughout Australia and throughout the year at all levels, from Junior Dragster to Top Fuel.

The Australian sport adds the Top Doorslammer class, which caters for full-bodied racing sedans, which are replicas of production vehicles. Engines for this class of racing are large-capacity, supercharged V8 engines, running methanol.

Broadcasting is provided by One HD.

Drag racing was imported to Europe by American NATO troops during the Cold War.[6] Races were held in West Germany beginning in the 1960s at the airbases at Ramstein and Sembach.[7]

Organized drag racing in Colombia is Club G3's responsibility, which is a private organization. The events take part at Autódromo de Tocancipá.

Drag racing is also gaining popularity in Pakistan, with private organizations organizing such events. The Bahria Town housing project recently organized a drag racing event in Rawalpindi, with the help of some of the country's best drivers.[9] 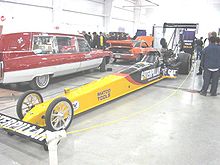 There are literally hundreds of classes in drag racing, each with different requirements and restrictions on things such as weight, engine size, body style, modifications, and many others. NHRA and IHRA share some of these classes, but many are solely used by one sanctioning body or the other. The NHRA boasts over 200 classes, while the IHRA has fewer. Some IHRA classes have multiple sub-classes in them to differentiate by engine components and other features. There is even a class for aspiring youngsters, Junior Dragster, which typically uses an eighth-mile, also favored by VW racers.

In 1997, the FIA (cars) and UEM (bikes) began sanctioning drag racing in Europe with a fully established European Drag Racing Championship, in cooperation (and rules compliance) with NHRA. The major European drag strips include Santa Pod Raceway in Podington, England; Alastaro Circuit, Finland; Mantorp Park, Sweden; Gardermoen Raceway, Norway and the Hockenheimring in Germany. The major difference is the nitro-class distance, which is 300 meters at some tracks, although the NHRA and FIA are likely to discuss the distance change in the future.

Pain Killer J/D. Note the driver, helmet off, is still in the car, which is under tow on the return road, headed for the pits.

There are currently only 5 pro classes in North America, which are:

In addition to the professional classes, these are some other popular classes:

A complete listing of all classes can be found on the respective NHRA and IHRA official websites (see external links). 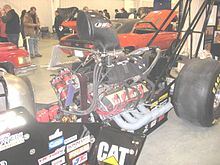 In the FIA European Drag Racing Championships, a different structure of professional categories is used with Top Fuel Dragster (with a 90% nitromethane mix), Top Methanol (Alcohol) Dragster, Top Methanol (Alcohol) Funny Car, Pro Stock, and Pro Modified running as professional championships as well as FIA specifications published for Fuel Funny Car although this does not run as a championship.

To allow different cars to compete against each other, some competitions are raced on a handicap basis, with faster cars delayed on the start line enough to theoretically even things up with the slower car. This may be based on rule differences between the cars in stock, super stock, and modified classes, or on a competitor's chosen "dial-in" in bracket racing.

A "dial-in" is a time the driver estimates it will take his or her car to cross the finish line, and is generally displayed on one or more windows so the starter can adjust the starting lights on the tree accordingly. The slower car will then get a head start equal to the difference in the two dial-ins, so if both cars perform perfectly, they would cross the finish line dead even. If either car goes faster than its dial-in (called breaking out), it is disqualified regardless of who has the lower elapsed time; if both cars break out, the one who breaks out by the smallest amount wins. However, if a driver had jump-started (red light) or crossed a boundary line, both violations override any break out (except in some classes with an absolute break out rule such as Junior classes). This eliminates any advantage from putting a slower time on the windshield to get a head start. The effect of the bracket racing rules is to place a premium on consistency of performance of the driver and car rather than on raw speed, in that victory goes to the driver able to precisely predict elapsed time, whether it is fast or slow. This in turn makes victory much less dependent on large infusions of money, and more dependent on skill. Therefore, bracket racing is popular with casual weekend racers. Many of these recreational racers will drive their vehicles to the track, race them, and then simply drive them home. Most tracks do not host national events every week, and on the interim weekends host local casual and weekend racers. Organizationally, however, the tracks are run according to the rules of either the NHRA or the IHRA (for the most part). Even street vehicles must pass a safety inspection prior to being allowed to race.

Besides NHRA and IHRA, there are niche organizations for muscle cars and nostalgia vehicles. The National Electric Drag Racing Association (NEDRA) races electric vehicles against high performance gasoline-powered vehicles such as Dodge Vipers or classic muscle cars in 1/4 and 1/8 mile races. The current electric drag racing record is 7.824s for a quarter mile. Another niche organisation is the VWDRC which run a VW-only championship with vehicles running under 7 seconds.

Rules require a radiator overflow tank, commonly called a puke can. This type (using an old beer can) is illegal at many tracks where a factory-type stock overflow tank (usually plastic) is required.