The Deutsche Tourenwagen Masters (DTM, German Touring Car Masters) is a touring car racing series based in Germany, but also with rounds elsewhere in Europe.

During the ITC era a large proportion of the revenue generated by the championship went to the FIA, with the result that less went to the teams who subsequently complained of little return on their increasingly large investment in the high-tech series. Since 1997 many ideas have been discussed in order to find a compromise for rules of a new DTM. Opel put the primary emphasis on cost control, Mercedes supported expensive competitiveness in development, BMW wanted an international series rather than one focussed on Germany only, while Audi insisted on allowing their trademark quattro four-wheel drive (despite running the rear wheel drive Audi R8 in sports car racing).

The DTM returned in 2000 as Mercedes and Opel had agreed to use cars that were based on the concept car that was shown by Opel on various occasions, e.g. the 1999 24 Hours Nürburgring where Opel celebrated its 100th anniversary. The series adopted the format of the 1995 championship, with most rounds held in Germany with occasional rounds throughout Europe, but having learnt the lessons of the ITC disaster, the ITR constantly strived to keep costs in the series from exploding to unreasonable levels, and to keep the championship firmly tied to its German roots. As too many races were planned outside Germany, no Championship (Meisterschaft) status was granted by the DMSB, and the DTM initials now stand for Deutsche Tourenwagen Masters (German Touring Car Masters).

The cars are supposed to be fast and spectacular, while still rather cheap to build and run. All DTM race cars have RWD and 4.0 L V8 engines which are air-restricted to 470 hp, no matter if similar layouts or engines are available in the road cars. Instead of the road car bodies, unrelated purpose-built chassis are used, which are closer to prototype racing. Many drivers have in fact described the handling of the cars as closer to single seater racing cars than road cars. Only the roof sections of the road cars are put on top of the roll cages, and lights and other distinctive design features are used in order to provide a resemblance to the road cars. Also, in order to save money and provide close racing, many common parts from third party specialist are used, like transmission (from Hewland and Xtrac), brakes, and Dunlop Tyres. The all-important aerodynamic configurations are tested in wind tunnels before the season, brought to an equal level, and kept that way throughout the season.

Alfa Romeo, who at the time were mounting successful campaigns in the European Touring Car Championship, did not return to the series. BMW was also involved in the ETCC and was not satisfied with a championship only for Germany. Audi did not enter as they insisted on using their signature quattro 4WD.

Unlike the previous incarnation which primarily used sedan models like the Mercedes-Benz W201, the new DTM featured only 2-door coupés. Opel used the upcoming Coupé version of the Astra as in the concept car, and Mercedes the CLK model which already was used as a pattern for the Mercedes-Benz CLK-GTR.

Attempts of Zakspeed to enter with a car looking like a Volvo C70 were not approved, but the motorsport arm of the Bavarian tuning company Abt Sportsline was allowed to enter on short notice. The 1999 STW-Supertouring-champion Christian Abt could not defend his STW title as this series was also discontinued, with Opel moving into DTM. Abt used the Audi TT as a basis, as Audi had no suitable 2-door coupé, even though the dimensions of this car did not fit into the rules.

In May 2000, the new DTM started with the traditional Hockenheimring short track version. Some cars still had no or few sponsorship decals. While Opel could match the speed of most Mercedes in the 2000 season, the hastily developed Abt-Audis were mainly outclassed. As the TT shape had rather poor aerodynamic properties, Abt was allowed to use a stretched form later. Further benefits like a higher rear wing helped the Abt-Audi TT-R win the DTM championship in 2002 with Laurent Aïello.

Ups and downs for Opel 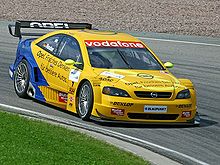 In 2000, Manuel Reuter came second in the championship. After that year, no Opel driver was among the top three, with few podium finishes and no victory for the disappointing "lightnings". On the other hand, it was Opel team boss Volker Strycek who brought a new highlight to the fans, by racing a modified DTM car on the traditional old version of the Nürburgring in 2002, 20 years after the top classes had moved to the modern Grand Prix track, and 10 years after the old DTM stopped racing there. The Opels did not win in most of their entries in the VLN endurance races as they were mainly testing, but the speed was impressive, and the fans loved it. They won however the 2003 Nürburgring 24 Hours against factory efforts by Audi (Who also ran a DTM-spec TT) and BMW (Who ran an ALMS-spec M3).

After their successes with the Audi R8 and the official support of the Abt-TTRs at the Nürburgring, Audi finally joined the DTM as a factory entry in 2004. The three constructors involved decided to switch to saloon bodies. The road models used as patterns since 2004 are the Audi A4, Opel Vectra GTS and the Mercedes-Benz C-Class. All dimensions, like wheelbase, are identical in order to provide equal opportunities without the actual design of the road cars having any influence.

The championship suffered a setback in 2004 when long-time also-ran Opel decided to pull out of the series at the end of the 2005 season, as part of a large cost-cutting operation in General Motors' European division. Initially the gap looked set to be filled by MG Rover, however their plans to enter the series were cancelled after the company collapsed in April 2005. Audi and Mercedes fielded 10 cars each in 2006, but the important television deal with the major television station ARD required three marques in 2007. Rumours surfaced that Alfa Romeo would return to the DTM in 2007. These rumors were helped by Alfa Romeo Sport boss Claudio Berro being seen in the Barcelona paddock. It was also thought that Alfa's possible return could be the reason why the 2007 DTM calendar started one month later than normal, to give Alfa Romeo extra time to make a DTM car. However, this did not happen.

The DTM carried on with only two manufacturers. There were some rumours regarding entries by various manufacturers (e.g. Citroen, Lancia, Renault or Jaguar), but they never materialized. The years 2008 and 2009 were marked by the dominance of Audi. Timo Scheider took the driver's championship in these years, giving Mercedes the runner-up position (Paul di Resta in 2008 and Gary Paffett in 2009). As of 2010, Mercedes have finally bridged the gap to Audi, as Paul di Resta has won the 2010 championship driving for AMG Mercedes.

In March 2010, GT Association (the governing body in Super GT series in Japan) reported the ITR are starting to unite the mechanical regulation with Japan's GT500 (Super GT's upper class), and NASCAR's Grand American Road Racing Association Grand Touring division to form a new Grand Touring specification.[citation needed] This regulation was expected to be completed in time for the 2015 season, while they were expected to start the unification on 2012.

In 2011, the DTM held a Race of Champions-style exhibition event in the Munich Olympic Stadium. From 2012 on, they plan it to be a full championship race.[citation needed]

BMW announced that they will return to the DTM in the 2012 season with their M3.[2]

On October 17, 2010, it was announced that a North American DTM Series would begin racing in 2013. Much like the system where the name and format of the American Le Mans Series were licensed to be run by Don Panoz, the American DTM will be licensed to and operated by NASCAR through its Grand American Road Racing Association. The inaugural 12-race series is set to be run on North American circuits in conjunction with Rolex Sports Car Series, NASCAR Sprint Cup Series, and NASCAR Nationwide Series events.[4]

When the series returned, it used a similar format to 1996: two races of 100 kilometres, with a short break between them. In 2001 and 2002 there was a short race of 35 kilometres as well as a long race of 100 kilometres, which included one pit stop and gave points for the top 10 as in earlier seasons. Since 2003 there has been only one race, which has a distance of about 170 kilometres, and two mandatory pit stops.

Mika Häkkinen in his Mercedes, 2006

However increasingly the DTM is being used by young guns such as Paul di Resta or Gary Paffett to jump-start their racing career in single-seaters. One driver this strategy appears to have worked for is Christijan Albers, who built a reputation by finishing second and third in the 2003 and 2004 championships with Mercedes-Benz and then graduated to Formula One in 2005. He came back in 2008, but this time driving for Audi. Paul di Resta currently (2011) races for Mercedes-engined Formula One team Force India, after winning the championship in 2010.

Gary Paffett has also used his championship win to gain a test with McLaren, and they signed him as permanent test driver for 2006. This prevented Paffett from defending his title in 2006, however he thought that it will be a springboard for a race seat during the 2007 Formula One season. The plan failed however, and Paffett returned to DTM in 2007, but in a 2006 specification car.

Four female drivers have taken part in the championship. In 2006 Vanina Ickx started racing for Audi and Susie Stoddart for Mercedes. In 2008 Ickx was replaced by Katherine Legge, who was subsequently replaced for the 2011 season by Rahel Frey. 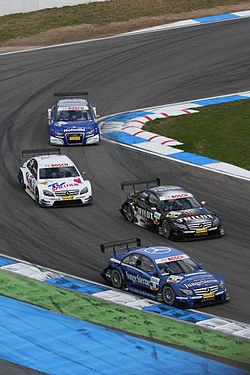