The Motor Racing Network (MRN) is the principal radio broadcasting operation of NASCAR, promoting themselves as "The Voice of NASCAR." It broadcasts coverage of most major NASCAR races at the top three levels of NASCAR at tracks owned by International Speedway Corporation as well as Dover International Speedway and Pocono Raceway: the NASCAR Sprint Cup Series and the Nationwide Series at those tracks, and the entire Camping World Truck Series. The exception to these are NSCS and NNS races held at tracks controlled by Speedway Motorsports, Inc., which operates their own radio network called the Performance Racing Network, and the Brickyard 400, which is broadcast by Indianapolis Motor Speedway's own radio network in conjunction with PRN.

In development of the Camping World Truck Series in 1995, NASCAR signed a unified radio contract and unified television contract where NASCAR, not the tracks, controlled all broadcast rights. A similar move was made for television (but not radio) in the other two national series in 2001. As such, all CWTS races are broadcast on MRN, regardless of track ownership. The Sprint Showdown qualifying race and NASCAR Sprint All-Star Race are also broadcast on MRN, despite being held at Charlotte Motor Speedway, an SMI-owned track.

MRN was founded in 1970 by William H.G. “Big Bill” France, the founder of NASCAR and the world famous Daytona International Speedway. Its first broadcast was the 1970 Daytona 500. 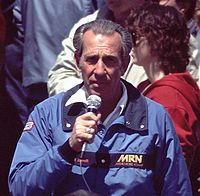 Ned Jarrett during his days as an MRN pit reporter

The most prominent broadcaster associated with MRN is probably Eli Gold, who is identified by many racing fans as personally being the "voice of NASCAR"; however, Gold's participation is somewhat limited by his association with broadcasts of University of Alabama football, NFL football, the Arena Football League (on TNN) and NHL hockey.

Broadcasts of Sprint Cup races receive MRN's highest ratings and hence the greatest station clearance (number of stations using the broadcasts). Audiences for the Nationwide and Craftsman Truck series are considerably smaller, and so are the number of affiliated stations. Many MRN stations broadcast all three series, with the lower series being preempted in many instances by other events.

Along with race broadcasts, MRN offers other race related programs. Many different reports, talk shows, and commentary are broadcast over the network, as well as via Sirius XM Radio's NASCAR channel. 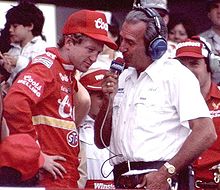 Other programming produced by the Motor Racing Network