Dirt track racing is a type of auto racing performed on oval tracks. It began in the United States before World War I and became widespread during the 1920s and 30s. Two different types of racecars predominated—open wheel racers in the Northeast and West and stock cars in the South. While open wheel racecars are purpose-built racing vehicles, stock cars (also known as fendered cars) can be either purpose-built racecars or street vehicles that have been modified to varying degrees.

Dirt track racing is the single most common form of auto racing in the United States. There are hundreds of local and regional racetracks throughout the nation: some estimates range as high as 1500. The sport is popular in Australia and Canada also. Many of the cars may also race on asphalt short tracks during the racing season. 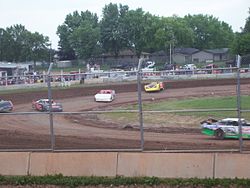 Dirt Late Model class drivers show how dirt track car drivers slide their car's backend around through a corner. The multiple drivers show the car angle at different points in a corner.

Nearly all tracks are oval and less than 1-mile (1.6 km) in length with most being ½ mile (804 m) or less. The most common increments in the U.S. are ½ mile, ⅜ mile (603 m), ⅓ mile (536 m), ¼ mile (402 m), and ⅛ mile (201 m). With the longer tracks, the racecars achieve higher speeds and the interval between cars increases. This decreases the chance of crashes but increases the damage and chance of injury when cars do crash.

The track surface may be composed of any soil, but most racers prefer a track with a clay base. The track operators usually try to keep the surface tacky and may sprinkle water on it if it begins to dry. Some operators build flat ovals, but many are highly banked.

In Great Britain the oval tracks are normally on grass with lengths of 400 meters (¼ mile) to 800 meters (½ mile). The race consists of several qualifying heats, each lasting four laps of the track leading up to the final.

Grass Track is very much a family sport suitable for all ages and abilities. Boys and girls from as young as six can compete on automatic machines. The ages and capacity classes progress right through to adult status. There are also classes in youth grass track to run motocross machines on a grass track circuit. Youth events are carefully controlled to provide good racing for young competitors.

In mainland Europe Long Tracks can be used on grass, or sand and can be up to 1-kilometer (0.62 mi) long. 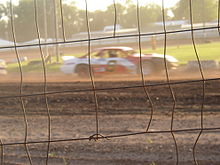 Each racetrack or sponsoring organization maintains a rule book outlining each class of racecar; including dimensions, engine size, equipment requirements, prohibitions, etc. The requirements for each class are usually coordinated with other racetracks and associations to allow for the widest available venue for each type of car. This coordination allows the drivers to enter many different racetracks, increasing their chances of winning; allows the racetrack to field as many cars as possible; lets the racing associations develop a series of race events; and promotes fan interest.

Many fans prefer one or the other of the different type cars. Open wheel fans say, "Real racecars don't have fenders." Stock car (shown right and above) fans point out that even minimal contact between open wheel racers usually disables both cars. In reality, both types of vehicles have weak and strong points. Open wheel racers are usually lighter and nimbler. Stock cars can push and shove their way to advancement.

Many tracks support both types of racer in their programs. Both types range from powerful V8 engines to small, still powerful, 4-cylinder engines. Some of the smaller open wheel racers even have classes for single-cylinder powerplants. Depending on the class, the cars may have wings to aid in handling at higher speeds.

Open wheel cars are generally manufactured with tubular frames and a body purchased for that particular class. Classes include:

The sanctioning bodies include:

Modified cars are a hybrid of open wheel cars and stock cars - this class of car has the racing characteristics of a stock with the rear wheels covered by fenders and the front wheels open. There are sanctioning bodies that control the rules for this class at most tracks. Each Sanctioning body has their own set of guidelines provided in an annual rule book and their own registration fees. Sanctioning bodies include:

Stock cars are generally automobiles manufactured by the major automakers with certain modifications as allowed for each class. There are several general types:

These are stock cars custom built for racing, usually with welded tubular frames and custom built or purchased bodies.

The most popular type of dirt stock cars are late models. They are categorized depending on what track and series that is running. The racetrack dictates what type of late model is raced, but most fall in to one of three categories:

Today’s current dirt super late models feature steel constructed tube frame chassis with aluminum bodies that give them a sleek aerodynamic appearance of a stock appearing race car but there is nothing stock about these 2300 pound machines. The cars are powered by an 800 horsepower (600 kW) motor than can turn in excess of 9,000 RPM. The engines are based on V-8 Chevrolet, Ford and MOPAR power plants.

Most racing series and special events offer three motor options with the use of weight breaks to create an even playing field:

Crate engines are sealed at the intake manifold, cylinder head, front cover, and oil pan with special twist off bolts. Crate engines must not be altered, modified, of changed in any way from factory specification.

Many tracks have variations on these rules in which the standard spec motor is the only option; however, the above rules are becoming more popular with the advent of the crate motor. 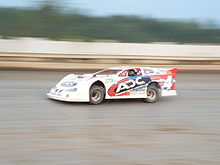 There are literally hundreds of additional unsanctioned regional and national special events run throughout the year.

Other major yearly events include:

These cars are automobiles just as driven on the street; including the original interiors. The engines may be modified as allowed under different rules: 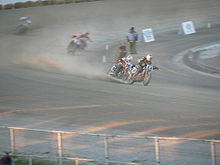 Dirt and Grass Track bikes have capacities of 250, 350 and 500 cc in the solo classes and can reach speeds of up to 80 mph (130 km/h) on the straights and with no brakes fitted to the machine. There are three sidecar classes. The continental class has a 500 cc single-cylinder engine, also in Great Britain there are left- and right-handed sidecar machines with the engines up to 1000 cc. Sidecar races are some of the most exciting in Grass Track sport, with the driver and passenger working together to obtain the best grip and speed around the corners.

Many obsolete race vehicles that were left in barns to rust are being restored to their former glory. The restored race vehicles are being displayed at car shows and sometimes raced. Cars that compete in vintage racing events are from the late 19th century to historic cars from a few years ago. There are more than 170 racing events in North America, and thousands of other vintage events sanctioned by hundreds of clubs.[1]

The typical race program usually involves a number of classes, and many tracks offer both open wheel and stock car racing. There is a wide variety of event formats.

Preliminary races for each class, called heat races, frequently open the schedule. The heat races may determine the starting race position in the main events and usually earn season championship points. The heat races are shorter than the feature races, and not as many cars race in each heat. There are numerous formats for qualifying for the feature event.

In "Progressive racing", the starting lineup for the heat races are randomly selected, and a pre-determined number of drivers qualify for the main event directly from each heat race.

There may be a "trophy dash" during the program to allow the heat winners or the season's top points-getters to compete for a trophy or reward. If the reward is monetary, the race may be called a "dash for the cash" or a "run for the money". Some tracks also use the qualifying dash in place of a heat race to determine where the top cars will start in the A feature.

In most sanctioned races or big races there will be qualifying that will determine the heat race line ups. In many races, the inversion is set at an established number (usually six cars), while other tracks (mostly for the A feature) the fastest qualifier will participate in a random drawing where he a number determines how many cars will be inverted.

The A feature or main feature race is held for each division. The top cars from the event compete in the race. The starting positions may be determined by the season's point standings, or by a combination of the heat/trophy dash/semi-feature finishing positions. It is usually the longest race in the program. Points, a trophy, and frequently a purse are generally awarded, with the amount of each is determined by finishing position. The winner of the feature event is considered the winner of the event.

Many tracks have other special events. Occasionally, a track will sponsor a "powder-puff" race to allow women the opportunity to drive the racecars for a few laps of racing. If enough women drivers express an interest in a separate event for themselves, the track operator may put the powder puff into its regular race schedule; otherwise, most serious women racers compete in the same events as the men.

From time to time, the track may have a "bonus points" race to attract racers and fans from competing tracks. Many times the track operators also promise a larger purse for winning these races.

Many tracks also have a "run-what-you-brung" contest (also "Spectator class/division"). The event features two drivers from the stands who, after signing waivers, can run their personal automobiles against each other in a one-on-one 1 or 2 lap shootout.

Dirt tracks tend to be somewhat more makeshift and more versatile than asphalt pavements, and can be converted for use in other motorsports. For instance, Little Valley Speedway in Little Valley, New York is a half-mile dirt track that can be converted into a figure-8 track, a demolition derby pit, or a tractor pull straitaway.

Both the racetracks and the racing associations award championships as determined by the guidelines of the associated rulebooks. Awards, usually for the top ten racers in each class, may include a trophy, a jacket, and a monetary amount.

Track championships are awarded according to the points earned during the season. A certain number of points may be awarded for participation in an event and additional points added depending on the finish position in each race. The points earned at one track do not generally count toward another track's championship.

The racing associations count points earned at the tracks for certain sponsored races similarly. Additionally they may promote the appearances of their drivers and winners at various other events.