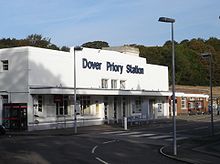 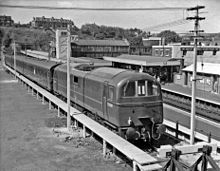 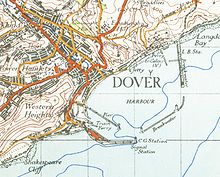 A 1908 Railway Clearing House map of lines around Dover

Dover Priory railway station is the main station in Dover in Kent, with the other station being Kearsney situated on the outskirts of Dover. (see this list for the others). All train services are provided by Southeastern. It is located in the south-east corner of the UK rail network.

As of May 2011[update] the typical off-peak service from the station is:

Dover Priory opened on 22 July 1861.[3] as the temporary terminus of the London, Chatham and Dover Railway (LCDR). It became a through station on 1 November 1861 with the completion of a tunnel though the Western Heights to gain access to the Western Docks area, where LCDR created Dover Harbour station[3] Initially the station was known as Dover Town but was renamed in July 1863 (leading to rival SER to adopt the name for one of its Dover stations).[3] Southern consolidated passenger services at Priory in 1927 and modernised the station in 1932.[4] The Chatham Main Line into Priory was electrified in 1959 as part of Stage 1 of Kent Coast Electrification, under the BR 1955 Modernisation Plan.[5] The line up to Ramsgate, via Deal was subsequently electrified under stage two of Kent Coast electrification in January 1961.[5] The line from Folkestone into Priory was electrified in June 1961.[5] The high-speed service to London St Pancras started in 2009. Special dispensation had to be sought to allow the service reach Dover as tunnels to the south are too narrow for emergency exits for rolling stock without end doors.[6]

In 1868 stationmaster Edward Walsh(e) was murdered by 18-year old Thomas Wells, a porter for the LCDR,[7] after having rebuked him for poor work. Wells was convicted and hanged.[8]