The Medway Valley Line is the name given to the railway line linking Strood and the Medway Towns with Maidstone West and onward to Paddock Wood, Tonbridge and London St Pancras International (peak only). The section from Maidstone West to Tonbridge passes through some of Kent's most picturesque countryside along the narrower sections of the River Medway.

The line was built in two stages by the South Eastern Railway (SER). The first stage opened on 25 September 1844 and was a branch off the SER's first main line that crossed Kent between the coast ports of Dover and Folkestone and the LBSCR's main line at Redhill. The junction was at Paddock Wood and followed the Medway Valley up to the county town of Maidstone that had been by passed by the new main line. Twelve years later, on 18 June 1856 the line was extended up the Medway Valley to the North Kent Line at Strood (which had opened in 1847). The SER merged with local rival London, Chatham and Dover Railway (LCDR) on 1 January 1899 to form the South Eastern and Chatham Railway (SECR). Post World War One, the railways were "grouped" and the SECR became part of Southern Railway.

For a brief period in the 1990s some services were extended to Gillingham (Kent) via Rochester and Chatham. This involved reversing trains and switching tracks at Strood.

It was designated by the Department for Transport as a community rail service on 28 September 2007.

The line is double track throughout, with a maximum speed of 70 mph.

During 2005, the signalling systems were upgraded, replacing the traditional semaphore signals with colour light signals.

Services are operated by Southeastern.

Trains typically run a half-hourly service between Strood and Maidstone, and typically hourly through to Paddock Wood. There is no longer an early morning service to London Bridge. Since the December 2009 timetable change, trains continue to Tonbridge rather than terminate at Paddock Wood.

On 18 March 2011, Southeastern announced the start of a new high speed service from Maidstone to St Pancras International via Strood on a trial basis.

A trial service commenced on 23 May 2011[1] and comes as a result of changes on the North Kent line to improve punctuality of existing services.

Vince Lucas, service delivery director said, “We’re pleased to be able to introduce this new service from Maidstone West to London. The new service will provide the people of Maidstone with an alternative way of getting into London each morning. It will also help improve the reliability and punctuality of services along the North Kent Line and the Sidcup line into London by reducing the number of trains running through the Rochester area, as experience has shown this is vulnerable to congestion and delays.”

To introduce this new service, existing services to and from Rochester and Faversham will be diverted. To ensure that Rochester receives the same number of trains, the current Broadstairs services* will call additionally at Rochester. These services will be increased to 12 carriages to accommodate the additional passengers. More information can be found here

From Monday 3 October, services on this route were strengthened to four carriages until May 2012. This was done by joining two Class 466s together. Also, one of the three allocations is booked as a 465. This includes 465/0/1/2s only though. 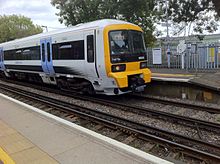 From 23 May, Class 395s became regular peak only visitors to the Medway Valley Line, operating a new trial high speed service between Maidstone West and St. Pancras International via Strood.