The Oxford to Bicester Line is a branch line linking Oxford and Bicester in Oxfordshire, England.

Since 2005 an enhanced service including Sunday services has run during the weeks before Christmas, mainly for the Bicester Village Shopping Centre adjacent to Bicester Town station. An enhanced service was operated on the weekend of 12 and 13 May 2007 to celebrate the 20th anniversary since the section of line re-opened.

In May 2009 a partnership between First Great Western and Oxfordshire County Council rebranded and relaunched the line as The Bicester Link.[1]

Passenger services are operated by Chiltern Railways, who took over from First Great Western on 22 May 2011.[2] Since December 2008, Oxfordshire County Council has been funding improvements to services on the line.[citation needed] The service on Mondays to Saturdays was improved with an evening service and a doubling of the number of trains on Saturdays. From May 2009, there were further improvements with extra trains during the daytime on Mondays to Fridays and a new all-year round Sunday service, with a train every 90 minutes. There are now 11 trains from Mondays to Thursdays, 12 trains on Fridays, 13 on Saturdays and nine on Sundays.

Speeds on the line are limited to 40 mph (64 km/h) because of the poor condition of the track, and 25 mph (40 km/h) on the wooden bridge over the River Ray.[citation needed]

On 22 May 2011, Chiltern Railways took over all passenger operations on the line. This is in advance of the new London Marylebone to Oxford service which is due to start in 2013.[2] 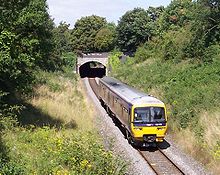 In August 2008 Chiltern Railways announced Project Evergreen 3 to create a new passenger service between Oxford and London Marylebone via High Wycombe by 2012. As part of this project Chiltern Railways would double most of the line, build a new Water Eaton Parkway passenger station to serve Kidlington and north Oxford and open the short 'missing-link' from Bicester Town station to the Chiltern Main Line. This would give Oxford an alternative to First Great Western's rail link to London Paddington and provide Oxford with a direct rail-link to High Wycombe for the first time since British Railways closed the Princes Risborough - Oxford section of the Wycombe Railway in 1964.[3]

This work is one element of the East West Rail Link which would see a new 100 mph (160 km/h) service linking Oxford with Milton Keynes, Bedford and possibly also Cambridge.[4]