Oxford railway station is a mainline railway station serving the city of Oxford, England. It is about 1⁄2 miles (800 m) west of the city centre, northwest of Frideswide Square and the eastern end of Botley Road, and on the line linking Reading with Birmingham New Street. It is also on the line for trains between London Paddington and Hereford via Worcester Shrub Hill. It is a starting point for fast and local trains to London Paddington and for local trains to Reading, Worcester and Bicester Town. The station is operated by First Great Western, and also served by CrossCountry and Chiltern Railways trains. 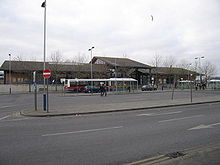 The front of Oxford railway station, northwest of Frideswide Square.

The Great Western Railway was first opened to Oxford on 12 June 1844[1] with a terminus station in what is now Western Road, Grandpont. In 1845 the Oxford and Rugby Railway began to build its line, starting from a junction at New Hinksey 0.75 miles (1.2 km) south of the GWR terminus. The junction was known as Millstream Junction, and was between the future sites of Hinksey Halt and Abingdon Road Halt, both or which were opened in 1908. The GWR took over the ORR while it was still being built, and opened the line as far as Banbury on 2 September 1850. For just over two years, trains from Oxford to Banbury started at Grandpont, and had to reverse at Millstream Junction in order to continue their journey.[2]

The ORR line included a new through station in Park End Street, so when this opened with the extension of the line from Banbury to Birmingham on 1 October 1852, the original Grandpont terminus was closed to passenger services.[1][3] The old station at Grandpont became a goods depot, but was closed completely on 26 November 1872, the day that the broad gauge tracks were removed north of Didcot. The site of the station was then sold, as was the trackbed from Millstream Junction, some 66 chains (1,300 m) in length.[4][5]

Major subsequent changes were removal of the last 7 ft ¼ in (2,140 mm) gauge tracks in 1872 and of the train shed in 1890–1. The station was substantially rebuilt by the Western Region of British Railways in 1971, further improvements being carried out during 1974 including the provision of a new travel centre,[6] and the new main building and footbridge were added in 1990.

The station has always been busy. In addition to current services, formerly there were others over the Wycombe Railway, Oxford, Witney and Fairford Railway, and Blenheim and Woodstock Branch Line.[citation needed] Through trains from the north to the Southern Railway also typically changed locomotives at Oxford.

It was for a time known as Oxford General station to distinguish it from the London and North Western Railway's Oxford Rewley Road terminus of the "Varsity Line" to Cambridge, which was adjacent and came under joint management in 1933. On 1 October 1951 British Railways closed Rewley Road station to passengers and transferred its services to the former GWR station.[1]

Up oil empties entering Oxford with two Diesels in 1964

South of the station immediately west of the railway tracks is Osney Cemetery, established in 1848 just before the current station site. Nearby is the site of the former Osney Abbey.

Passenger traffic at Oxford is growing rapidly. In the seven years 2003–10 the number of passengers using the station increased by 49%.[7]

In November 2009 it was announced that Oxford station would be expanded. A £10 million joint development between Network Rail and Oxfordshire County Council would create a new platform on part of the station’s long-stay car park. The new platform (south of platform 1) would allow trains to arrive and depart from the same track and reduce the need for empty trains to be shunted around the station. Currently, in busy periods trains can be kept waiting outside of the station for a platform to become available.

A new covered footbridge would also be built over Botley Road to link the station building with the new platform, replacing the existing footbridge to the car park. The new platform was to have been brought into use during 2011, and was to be part of the city and county councils' West End Area Action Plan for the western part of the city centre, which also considers other rail projects such as Evergreen 3 and the Paddington – Oxford electrification.[8] 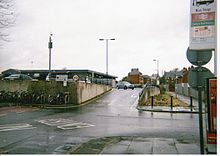 Oxford station's car park as it was in 2002. It is due to be significantly expanded and overhauled along with the rest of the station in the mid 2010s, when the line to Bicester Town is improved. The strip of waste land by the path will become part of the new car park. 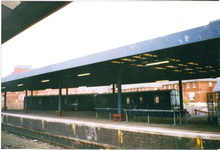 A General Utility Van and a Covered Carriage Truck in a siding at Oxford station in 2004. In 2013 the parcels platform will become a passenger one and extended in to the car park.

The scheme also includes two new platforms at Oxford station, to be built on the site of the disused parcels depot. The new platforms would initially be five carriages in length, but provision will be made for them to be extended southwards to eight carriages.[9]

First Great Western stables Class 165 and 166s units in the sidings to the north of the station.

Reflections in the window of a First Great Western Class 165.