CrossCountry
This article is about the train operating company in the United Kingdom. For other uses, see Cross country.

CrossCountry (sometimes known as CrossCountry Trains) is the brand name of XC Trains Ltd., a British train operating company owned by Arriva. The company operates a network of express and long-distance train services between a variety of towns and cities outside London which includes Britain's longest direct railway journey, the 08:20 from Aberdeen to Penzance which takes 13 hours and 23 minutes to complete. [1]

The CrossCountry franchise was formed through the amalgamation of most of the former Cross Country franchise held by Virgin Trains with some of the longer-distance routes operated by Midlands-based Central Trains. On 10 July 2007, the Department for Transport announced that Arriva plc had won the rights to the franchise,[2] with the company taking control on 11 November 2007.

The company operates a number of key inter-city routes outside London including the Cross Country Route from the North East to the South West, as well as a range of shorter-distance regional express services.

Unlike most other franchise operators in Great Britain, CrossCountry does not manage any stations, even though there are certain stations served by no operator other than CrossCountry.

The hourly service operates on each basic route: 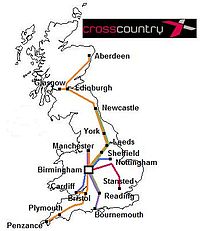 There are extensions to the basic service pattern:

On Summer Saturdays, there are trains to Newquay from various parts of the network. 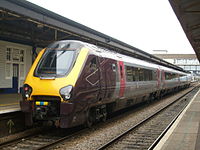 Typically, during weekday daytimes, each of these six routes sees one CrossCountry train per hour, with the exception of Birmingham–Leicester and Birmingham–Nottingham (which each see two). These services combine to provide higher frequencies on the following sections:

Service on Sundays is slightly different from the normal core routes. The routes on Sundays are:

Plans were included by CrossCountry to reopen the railway station at Kenilworth. In April 2008, it agreed with Warwickshire county council to draw up a business case.[4]

There are proposals for a station at Worcester (Norton) Parkway, near the city of Worcester, currently bypassed by CrossCountry's trains. If this station is built, then it may be served by CrossCountry services.

There are talks taking place that may see CrossCountry services go through from Edinburgh to Glasgow via Carstairs, replacing the services currently provided by East Coast Trains.[5]

From December 2010, some trains were extended from Reading to Southampton Central on the route to and from Newcastle.[6]

Stations served only by CrossCountry

CrossCountry does not manage any stations. Following stations are served only by CrossCountry but are managed by London Midland, East Midlands Trains or National Express East Anglia: 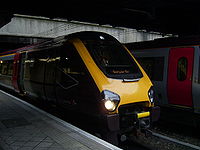 Under the control of the previous franchisee, Virgin Trains, Cross Country services were increased in frequency, but using shorter trains. Intended to provide a more attractive service without reducing overall capacity, this strategy left the company struggling to accommodate peak loads on popular services or the ongoing growth in passenger numbers.[8] It also led to the withdrawal of services from previously-served destinations such as Poole[9] as the company concentrated its rolling stock on its core network.

The now defunct Strategic Rail Authority refused to underwrite the cost for Virgin Trains to order additional rolling stock. CrossCountry has since added five refurbished HST sets to its fleet. The removal of on-board shops to create additional luggage space has attracted criticism from passengers and MPs in the Westcountry. The removal of bays of seating around tables and the addition of more seats with reduced legroom has been criticised, after Arriva promised to increase the seating capacity of their trains, which was believed[by whom?] to refer to lengthening of the trains themselves.[10][11]

CrossCountry was also criticised for introducing the first £1,000 fare in Britain in November 2009, for a first-class return between Newquay and Kyle of Lochalsh.[12] A little over a year earlier, the same fare had cost under £500.[12] Commentators noted that CrossCountry was charging over £100 for the trip between Par and Newquay, even though the trains operating it have no first-class compartments, and First Great Western, which operates the service, charges as little as £3.90 for a day's unlimited travel on the line.[citation needed] 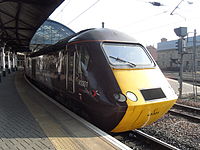 Virgin CrossCountry previously operated the Class 220 and Class 221 DEMUs. Twenty-one Class 221 units have been transferred to the Virgin West Coast franchise to operate the North Wales route and the West Midlands to Scotland services. CrossCountry also use Class 170 Turbostars inherited from Central Trains. Class 220s and 221s underwent refurbishment at Bombardier, Derby. This included removing the shop and adding extra luggage space. The refurbishment was completed in August 2009.

The first CrossCountry-liveried HST powercar was released from its overhaul at Brush Traction, Loughborough on 16 July 2008. To identify its fleet, CrossCountry is renumbering all of its HST units by adding an extra 200 to the old number, the newly repainted HST being 43301 (originally 43101). 43301 had to be completely rebuilt by Brush Traction, as it has been out of service for more than 5 years. As a standard, CrossCountry is installing MTU Friedrichshafen engines to replace the old Paxman Valenta ones, and is repainting the units into the two-tone CrossCountry livery of grey/silver and chocolate brown. At present 5 x Mark 3 TSO's (1 out of each HST set) are currently stored and 1 set (XC01) went on loan to East Coast for 2 Months between January and March 2010. From the December 2009 timetable change the number of weekday HST diagrams was reduced, from 4 to 2 (3 on Mondays/Fridays). All HST's are currently 2+7.