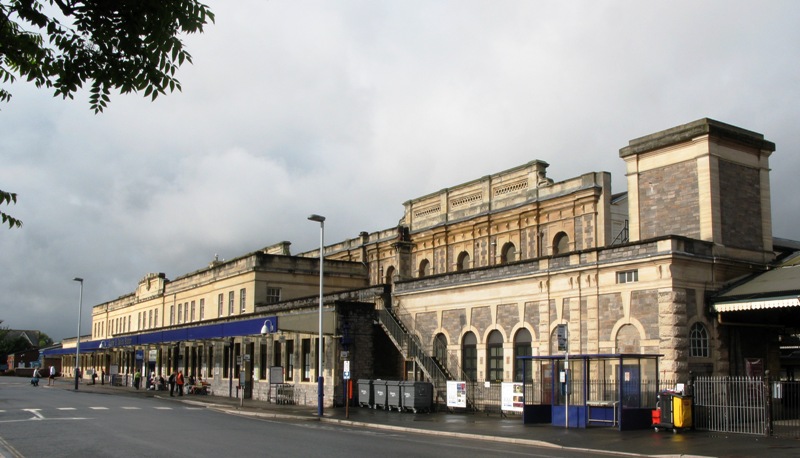 Exeter St Davids station is the most important of seven stations in the city of in southwest . Today the station is owned by and operated by .

The station was opened on by the (B&ER).

This was not too much of a problem while the station was at the end of the line, but on the South Devon Railway (SDR) opened a line westwards towards Plymouth. [cite book| last = Gregory| first = R H| title = The South Devon Railway| publisher = Oakwood Press| date = 1982| location = Salisbury| id = ISBN 0-853612-86-2] A carriage shed was built for the SDR at the south end of the B&ER platform but the s and locomotive sheds for both companies were to the west, between the station and the . The SDR was designed to be worked by atmospheric power and an engine house was built on the banks of the river near the locomotive shed. [cite book | last = Kay | first = Peter | title = Exeter - Newton Abbot: A Railway History | publisher = Platform 5 Publishing | date = 1991 | location = Sheffield | id = ISBN 1-87252-442-7 ] This was only used for its original purpose for about a year but was not demolished until many years later.

The next railway to arrive at St Davids was the on , the junction of which was a little distance to the north of the station at Cowley Bridge. This line was worked by the B&ER and trains were accommodated at the existing platforms. All these railways had been built to the RailGauge|84 , but on the RailGauge|ussg gauge (LSWR) brought a line into the station from their own central station in Queen Street. The LSWR owned the Exeter and Crediton Railway and started to work the line for itself, although the broad gauge was retained for the B&ER to work goods trains to Crediton.

With two gauges and four companies using the single-sided station, it was in need of remodelling. A new double-sided platform opened on the site west side of the line and the original "up" platform at the northern end was closed. The original platforms had all had individual s covering the tracks, and the opportunity was taken to replace these with one large train shed across all the main tracks and platforms. North of the station was a and just beyond this an additional goods shed was constructed. Unlike the earlier ones it was solely for transferring goods between the trains of the two different gauges. All these buildings were designed by the Francis Fox, the B&ER engineer, and the work was completed in 1864.

The B&ER was amalgamated with the on and the SDR did the same thing exactly one month later. The main line from Bristol was rebuilt with mixed gauge track that allowed broad gauge trains to run through from to Penzance, while at the same time offering a track for local trains from Bristol Temple Meads; the new line being ready by .

The train shed was removed in 1912-13 and the platforms extended northwards towards the level crossing. [cite book | last = Beck | first = Keith | coauthor = Copsey, John | title = The Great Western in South Devon | publisher = Wild Swan Publication | date = 1990 | location = Didcot | id = ISBN 0-90686-790-8 ] A second island platform was provided on the west side and this entailed the goods sheds being narrowed from two tracks to one at their southern end. The middle island platform was mainly used for LSWR trains while down GWR services used the original main platform and the new island platforms. The station has remained largely in this form since, but resignalling in the 1985 saw the ex-LSWR services moved to the main platform so that down ex-GWR line services did not have to cross their path at the south end of the station. A through line between platforms 1 and 3 was removed at the same time. The new signal box was built on the site of the old atmospheric engine house and replaced three older signal boxes.

There are still many remains of the earlier stations to be seen. The main façade dates from 1864 and the Great Western Hotel dates from the earliest days, as does the southern section of platform 1. The goods shed opposite platform 6 shows the angle where the southern end was cut back in 1912, and at the northern end part of the original goods shed still stands beneath later extensions. The 1864 transfer shed can still be seen beside the line beyond Red Cow Crossing.

The station entrance is on the east side of the line, facing the city centre which is about a 15 minutes walk distant. The route to the centre and also are well signposted. There are also frequent bus services to the centre from outside the station and trains to Exmouth and London Waterloo call at .

The main buffet and bookshop are both outside the ticket gates. There are also a number of local shops outside the station along with the Great Western Hotel. There is a smaller buffet on platforms 5 & 6 and a small kiosk on platforms 3 & 4. [cite book| last = Oakley| first = Mike| title = Devon Railway Stations| publisher = The Dovecote Press| date = 2007| location = Wimbourne| id = ISBN 1-904349-55-6]

The main passenger footbridge has many paintings resembling es and depicting romantic versions of rail travel. A second bridge fitted with lifts provides disabled access. When the lifts are out of action an electric is used, crossing at track level south of the station.

The middle pair of platforms is numbered 3 & 4. The former is used by similar trains to platform 1, but platforms 4-6 do not have access to the lines from Exeter Central. Instead platform 4 is the main platform for inter-city trains to Paignton, Plymouth and Penzance. Trains from both platforms 1 and 3 can also reach this route so trains from Exmouth or Waterloo that continue westwards will reverse in one of these platforms.

The third platform block sees northbound trains to London Paddington and the North use platform 5. Various local services use platform 6 as do trains from Paddington or the North that terminate at Exeter then return northwards.

Beyond platform six is a signal box that controls not just St Davids but also many miles around. Next to this is where sets used on local services are fuelled. The next building is a large goods shed that is no longer used by the railway. Another goods shed is situated beyond Red Cow Crossing at the north end of the platforms, and finally beyond that is Riverside Yard which still sees a little goods traffic. is about a mile away at the far end of Riverside Yard, but the junction for the Exeter Central line is right by the south end of the platforms. This line curves eastwards and climbs steeply to cross a small viaduct before entering a tunnel beneath the city; the main line instead stays on the level and crosses both the and the city’s flood defence channel before curved gently out of sight.

St Davids is the busiest station in Devon, handling over 300,000 more passengers each year than Plymouth due to the large number of people changing trains at Exeter. Comparing the year from April 2006 to that which started in April 2002, passenger numbers increased by 18%. [cite web|title =Station Usage|work =Rail Statistics| url=http://www.rail-reg.gov.uk/server/show/nav.1529|publisher =Office of Rail Regulation|accessdate = 2008-06-30] The statistics cover twelve month periods that start in April.

There are two direct routes from St Davids to . The main line is generally considered to be the service over the Penzance to London Paddington line,

Some of the above trains terminate at St Davids, especially those from Waterloo, roughly one third continue westwards to Paignton, Plymouth, or Penzance. The first part of this journey is along the famous sea wall through Dawlish.

In addition to this core daytime pattern there are a number of other, less frequent, services including the sleeping car service from London Paddington to Penzance. On summer Sundays services are operated over the Tarka Line and then on an otherwise goods-only line to Okehampton on the , a the steam hauled “” calls on its wwekly run to Paignton and Kingswear on the .