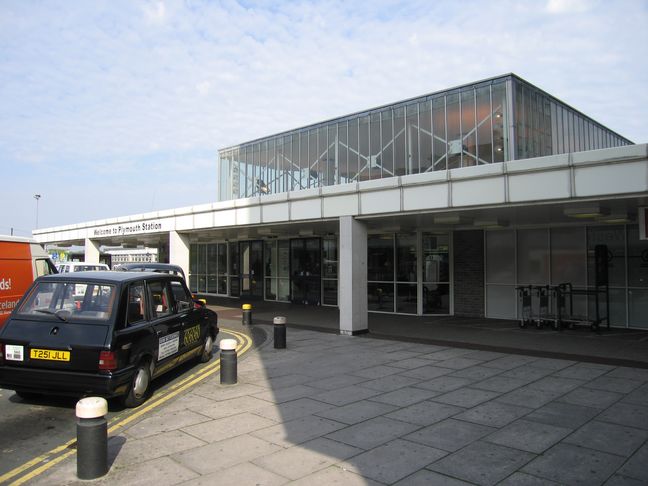 Plymouth railway station serves the city of , , . It is situated on the northern edge of the city centre close to the North Cross roundabout. It has the largest number of passengers starting and finishing their journeys at any station in the , and is the largest of the six surviving s in the city, being the only one served by s.

Originally named Plymouth North Road, it was opened in 1877 as a joint station for the (GWR) and the (LSWR). It was expanded in 1908 but a major rebuilding scheme that started in 1938 was delayed by the and was not completed until 1962. commented unfavourably on its new form in his introduction to "The Book of the Great Western": ::"Plymouth (North Road) dullest of stations and no less dull now it has been rebuilt in copybook contemporary." [cite book| last = Perry| first = George (editor)| title = 'The Book of the Great Western| publisher = Magazine| date = 1970| location = London| id = ISBN 0-72300-018-2]

The first in Plymouth was opened by the South Devon Railway on [cite book| last = Gregory| first = R H| title = The South Devon Railway| publisher = Oakwood Press| date = 1982| location = Salisbury| id = ISBN 0-853612-86-2] at Millbay, on the site now occupied by the . This company amalgamated with the GWR in 1876, just as the LSWR was completing its rival route from London to Plymouth. [cite book| last = MacDermot| first = E T| title = History of the Great Western Railway, volume II 1863-1921| publisher = | date = 1931| location = London] North Road station was opened on to provide a joint facility for trains of both companies. It was just west of the earlier , while at its west end a new junction allowed direct access to the and the LSWR's .

The station was built of wood and the platforms were fully covered by s. It originally had just two through platforms but additional platforms were added in a scheme executed in 1908. Further major rebuilding work started in 1938; one was replaced and the second moved to make way for the new works, and Houndiscombe Road bridge at the east end of the station was rebuilt. Work was soon stopped due to the but on North Road was increased when Millbay station had to be closed to passengers in 1941 following an air raid.

The old LSWR Friary station was closed from , following which North Road was renamed as just 'Plymouth'.

The rebuilding work was resumed in 1956 and the new station with its large office block, 'Intercity House', was formally opened by Dr , the Chairman, on .

The station was originally controlled from two es. 'North Road East' was situated on the north side of the line to the east of the station, while 'North Road West' was on the south side of the line at the west end of the station where it could control the junction of the original lines to Millbay with the new Cornwall Loop Line to Devonport. The adjacent signal boxes were at Mutley to the east, Cornwall Junction on the Millbay line, and Devonport Junction at the far end of the Cornwall Loop.

Both of the North Road boxes were closed in November 1908 and replaced by new ones with the same names. The West box was now situated on the north side of the line and had 59 levers, while the East box needed just 48. They were each convert|38|ft|m|1 long. Mutley box closed at the same time, the next box now being at Mannamead on the other side of Mutley Tunnel, which had opened about three years earlier.

The rebuilding work of 1938 meant more signalling alterations. On the timber West box was lifted up and moved to a new position clear of the proposed works, being brought back into use on . At the other end of the station the East box was closed and a new convert|79|ft|m|1 structure built, again on the north side of the line, which was brought into use on .

Both signal boxes were closed on when a new 'Plymouth Panel Signal Box' was opened on the west end of the new Platform 1; the West box was subsequently demolished, but the East box still stands on the north side of the line close to the bridge that carries Houndiscombe Road over the line. Multiple-aspect signals have controlled movements of trains throughout the Plymouth area since the opening of this new signal box in 1960. The adjacent boxes were initially at Laira Junction in the east and Keyham in the west.

The station has its entrance on the south side which gives access to the city centre. The west side of the station is the ticket office, while on the north and east sides are various retail outlets selling food and newspapers. [cite web| title =Plymouth| work =Station Facilities| publisher =National Rail| url =http://www.nationalrail.co.uk/stations/PLY/details.html#Station_Facilities| accessdate = 2008-07-22] There is also a small buffet outlet on platforms 7 and 8. The platform area is separated from the concourse by ticket gates.

The remaining platforms are reached by a subway immediately inside the ticket gates; there are lifts to the subway on each of the groups of platforms.

Beyond Platform 8 are two tracks, known as Park Sidings, which are used for stabling trains between services, but most trains are nowadays kept on the platform tracks between arrival and departure. There are some more sidings adjacent to platform 1. There is an extra track between platforms 4 and 5 for through goods trains and shunting manoeuvres.

Plymouth is served by trains on the main line from London, some of which terminate at Plymouth but many continue over the to Penzance.

Local services are provided by First Great Western along the Cornish Main Line and also on the to Gunnislake.

Plymouth sees a larger number of passengers starting or finishing their journey than any other station in Devon, although Exeter St Davids has more passengers due to a larger number changing trains there. Comparing the year from April 2006 to that which started in April 2002, passenger numbers increased by 29%.