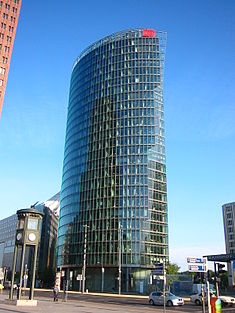 The "BahnTower" in Potsdamer Platz, Berlin, headquarter of the DB. It was also the home of the studios of Bahn TV.

Bahn TV (i.e.: Railway TV) was a television channel owned by the Deutsche Bahn (DB), the national railway company of Germany, dedicated to rail transport topics. Started in the beginnings of 2001, it was closed on 31 December 2010.[1] From February to the 31st December 2010 the channel was named DB Bewegtbild[2] (i.e.: DB Video).

The channel was launched on January 2001 as a staff television for the employees of the DB Group. The program was initially received only in some offices, break rooms and cafeterias of the Deutsche Bahn. To send content to DB employees, in early 2003 it was moved on the common satellite position at 19.2 degrees East.

Since May 2005, the station has been expanded to the specialty channel and promoted since September 2006 as "TV customers of DB Group" and as a niche channel for mobility, logistics and travel. The station had been fed into the digital channel packages of cable networks from Primacom, Net Cologne, Kabel BW, Tele-Columbus AG, Unity Media, wilhelm.tel and other digital city networks.[3]

The broadcasting of web TV by satellite ended on 1 July 2008. The reception of the channel, from that day, was possible exclusively via Internet (Bahn TV Online), choosing between five different webcasts: "Aktuell" (latest news), "Mobilität und Logistik" (mobility and logistics), "Fernweh" (wanderlust), "Nostalgie" (nostalgia) and "In Fahrt" (ride in). Renamed "DB Bewegtbild" on February 2010, at the end of December the Web TV was closed and now refer to the DB Group website.[1][4]