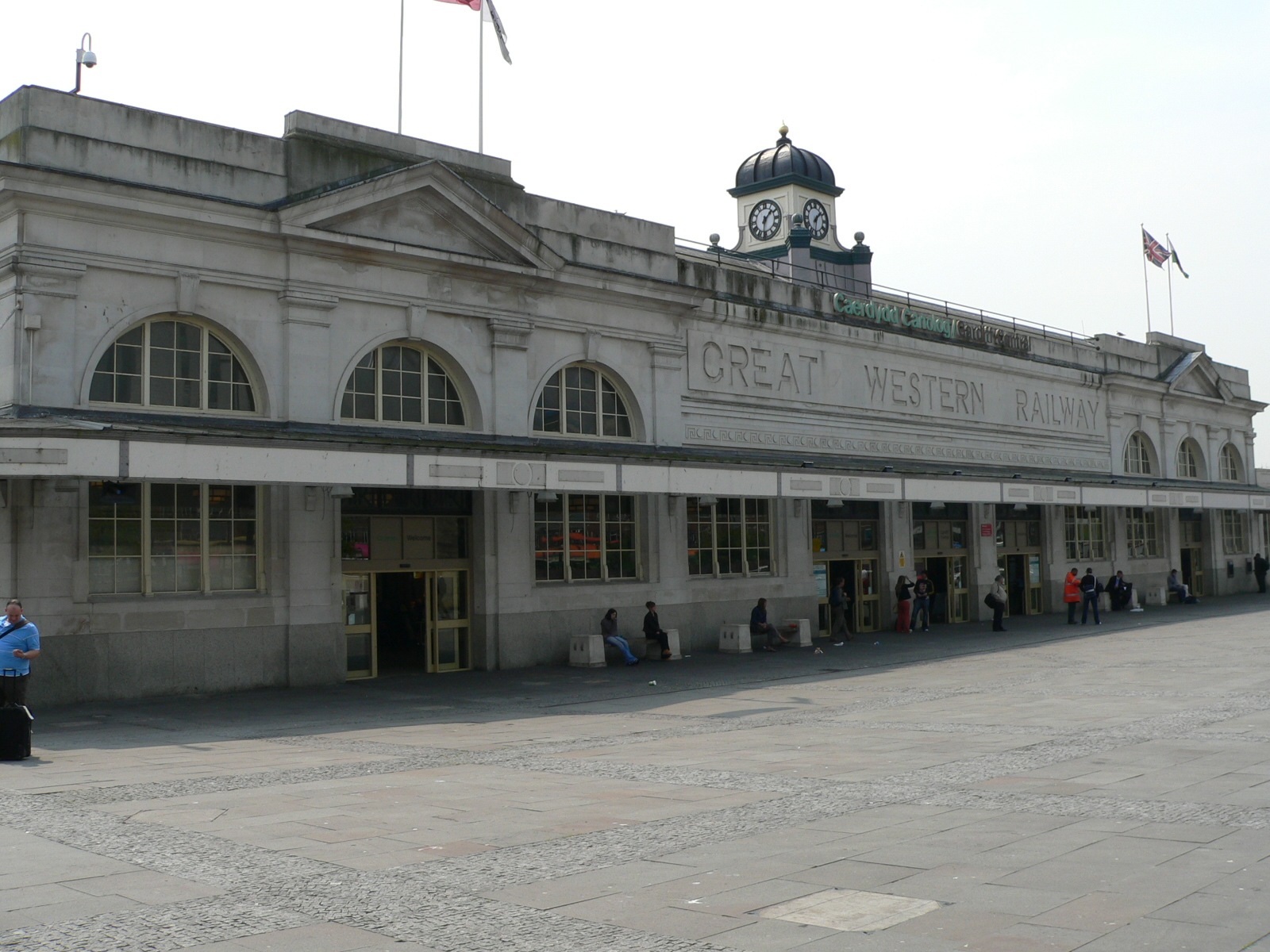 It is the largest and busiest in Cardiff itself and in Wales. It is one of the major stations of the British rail network, being the tenth busiest station in the United Kingdom, outside of London [Data from the 06/07 station usage] .

The station is managed by who operate most services. and also serve the station. It is a major hub for the suburban services (several lines in Cardiff and the surrounding valleys), First Great Western Intercity services to Bristol and London, and services to and . It serves as an interchange between the rest of South and West Wales to major English and Scottish towns and cities.

The station was known as "Cardiff General" until 7 May 1973 [ [http://pirate.cardiffschools.net/index1.htm Cardiff Timeline] ] . It is located near the on Central Square in the city centre. It is one of 21 railway stations in the city, and one of the two main stations, the other being Cardiff Queen Street.

The whole station including the Water Tower close to platform 0 is Grade II listed.

The station was opened by the South Wales Railway in 1850. Its successor company, the , rebuilt it in 1932 as is marked by the name carved onto the façade (larger than the name of the station). The formerly separate "Cardiff Riverside" suburban station of 1893 was integrated into the main station in 1940 but its platforms ceased to be used for passenger traffic in the 1960s [cite book|author=Barrie, D.S.M.|title=A Regional History of the Railways of Great Britain, vol. 12: South Wales|publisher=David & Charles|year=1980 ISBN-10|0-7153-7970-4] .

There are two entrances, the first and main of which, is on Central Square and accessed from Wood Street, adjacent to and two main taxi ranks. This entrance leads to the station's main concourse.

The other entrance is at the rear of the station, accessed from Tresillian Way / St. Mary Street, where the station's car park is found. The railway tracks are above the two subways, which run parallel under the tracks linking the two main entrances and the platforms are accessed by stairs and lifts. From both entrances, a valid ticket is required to pass through a barrier and gain access to the platforms.

The majority of facilities are located on the main concourse. These include:
*Ticket Desks and Machines
*Cash Machines
*Information Desk
*Telephones
*WCs
*
*Upper Crust Take Away
*Sandwich Bar
*Marks and Spencer Simply Food
* (on Central Square)
*

Toilets, vending machines and waiting rooms are found on all islands. An Upper Crust café is situated on platforms 1 and 2.

Cycle parking is available in the Wood Street car park. Cycles can be taken on most trains without a reservation, unless on services and trains to London Paddington when a reservation must be made at least two hours before departure.

Platform 0 is not accessed by the main subways to the platforms, it is accessed by a staircase at the west of the station next to the store. Platform 0 is mainly used for the following services:

* Ebbw Vale Parkway via Rogerstone and Risca and Pontymister. These are usually operated by Class 150 'Sprinter' units.

Platform 1 is mainly used for the following services:

Platform 2 is used for the following services:

Platforms 3 and 4 are divided into 'A' and 'B' sections and are thus capable of holding two local trains or a single HST train. Unlike at Birmingham New Street, however, these are not separately signalled and it is not uncommon for the other platforms to be used by more than one train.Platform 3 is used for the following services:

Platform 4 mainly acts as a terminus platform but can be used as a spare for platform 3 if for whatever reason the latter is unavailable. The following services that depart from platform 4 are:

* Maesteg via Pontyclun and Bridgend.
* Shrewsbury via Newport and Hereford.

Platform 7 is also used for services from Treherbert that terminate at Cardiff Central.

Cardiff Central bus station is the central point of reference for all local and national services in Cardiff. The terminal contains six covered ranks on the north side for most as well as other services. Long-distance services to the valleys and coach services, e.g. and , run from rank A at the north end. Stops either side of Wood Street, which runs alongside the main terminal, are used mainly for departures to Barry, , Heath Hospital, , Caerau, Ely and .

The railway station also has a dedicated bus stop on the south side of the station, referred to as "rear of the station" by station staff. On National Rail departure boards this is sometimes referred to as Cardiff Central Bus Stn "CCB". The stop is also used for Rail Replacement services and Cardiff Bus BayCar service.

Buses run weekdays from early morning (around 05:00) to late at night, the last services leaving at 23:20 on almost all major routes.

is situated 12 miles east of Cardiff city centre. In 2005, a section of the Vale of Glamorgan Line was re-opened between Barry and Bridgend. Ever since, there have been services to once every hour for most of the day (Monday-Saturday) and a two-hourly service on Sunday. At the airport station, passengers must take additional transport. There is a free shuttle provided to take passengers to the main terminal. Buses to and from the airport appear on the National Rail Enquiries website.

Traffic levels on the London Paddington route are rising faster than national average, with continued increases predicted. The now defunct Strategic Rail Authority produced a () for the Great Western Main Line in 2005 to propose ways of meeting this demand, Network Rail plan to implement a new study in 2008. In the meantime, their 2007 Business Plan includes the provision of extra platform capacity at Cardiff Central (as well as Newport and ), also resignalling and line speed improvements in South Wales, most of which would be delivered in 2010-2014.