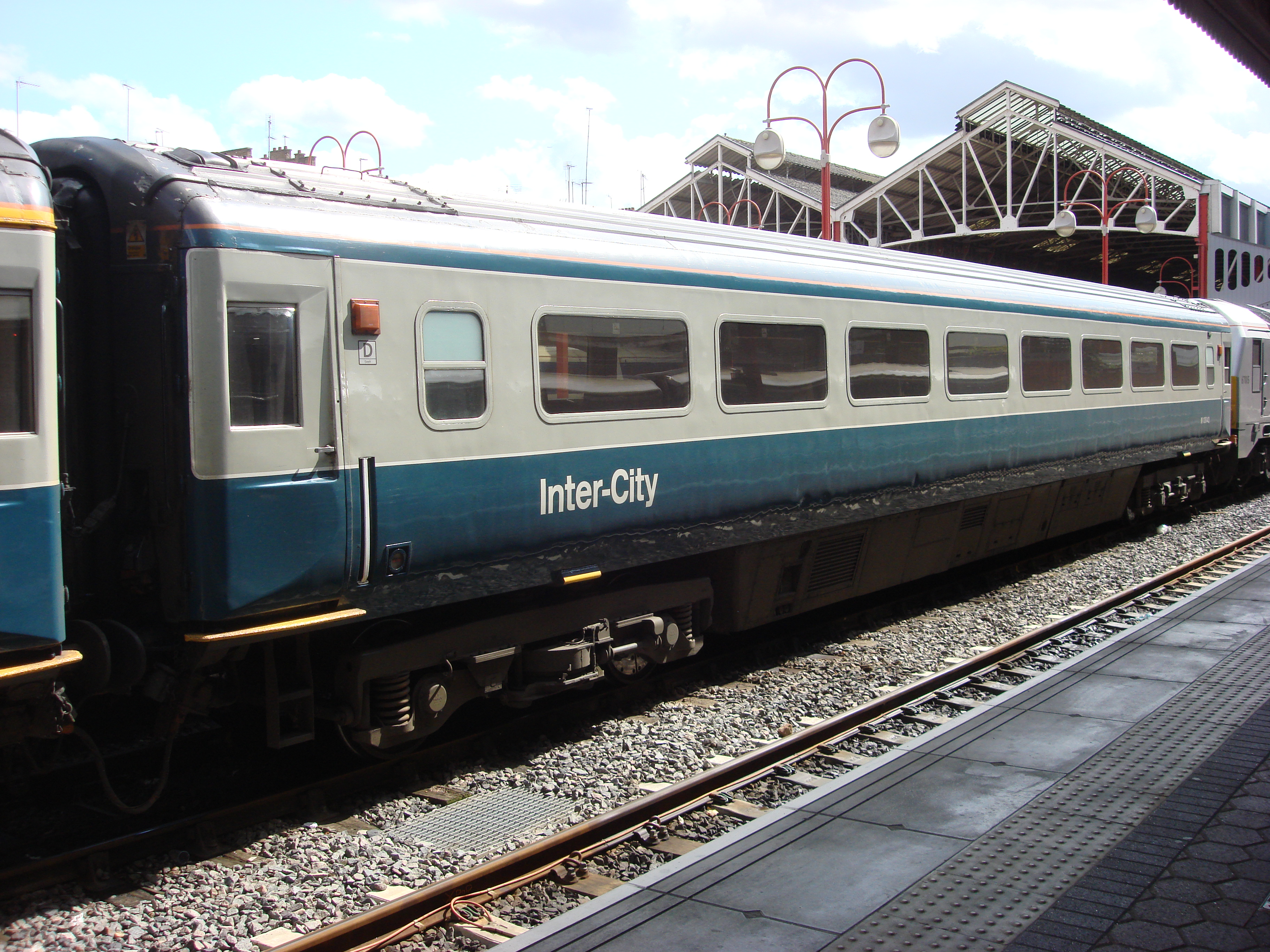 's third fundamental design of carriage was designated Mark 3, and was introduced in primarily for use on the High Speed Train (HST). The coaches were also intended to be used as conventional loco-hauled stock as part of the (WCML) northern electrification scheme in the mid-'70s; these derivative versions being designated as 3A and 3B. The final batch was built in , however Mark 3-based multiple units continued to be built until the early 1990s.

At first glance, the Mark 3 looks similar to Mark 2D, 2E and 2F coaches, but is in fact a completely different design. A difference aiding quick recognition is the ridged roof of the Mark 3s, compared with a smooth roof on the Mark 2s.

The bodyshell is 75 feet (22.86m) long, almost 10 feet longer than the Mark 2, of full construction and has gained a strong reputation within the railway industry for its exceptional strength and crashworthiness. Another important advance over its predecessor was the adoption of secondary between the body and the bogies giving the passengers an exceptionally smooth ride. The bogies, classified BT10, were designed specifically for the Mark 3 coaches and have coil spring primary suspension with hydraulic dampers enabling a maximum speed of 125 mph (200 km/h) &mdash; the Mark 2 is nominally limited to 100 mph (160 km/h).

Ancillaries such as electrical and air conditioning systems were grouped together in discrete modules housed behind an aerodynamic skirting between the bogies; on the Mark 2 these were randomly mounted above and below the passenger seating area. The lighting and air conditioning fittings were for the first time integrated into the ceiling panels. Other new features (first seen on the Mark 2F) were the pneumatically operated automatic gangway doors which were triggered by pressure pads under the floor, and a speed operated central door locking system for the manually operated slam-doors.

The main difference between the HST vehicles and the loco hauled Mark 3A derivative relate to electrical supply arrangements. HST MK3's take an industrial voltage/frequency 3-phase supply directly from an auxiliary alternator in the power car to supply on board equipment such as air conditioning. The loco hauled vehicles take a standard single phase 1000V AC or DC train heat supply from the locomotive and convert it through motor alternator units located under the floor. These convert the train supply to 3-phase 415/240V 50Hz AC to power air conditioning and other ancillaries. The other main difference is the lack of buffers on HST coaches.

The later MK3B build provided additional 1st Class loco hauled vehicles for the West Coast Mainline. These are virtually the same as earlier Mk3A's, but have an improved Motor Alternator unit with compound wound motor and seating derived from the Advanced Passenger Train (APT)

The Mark 3 bodyshell was also used as the basis for ' 450 Class DMU.

Since , the Royal Train has used nine specially equipped Mark 3 coaches to transport members of the Royal Family. These were rebuilt from the original HST prototype vehicles.

Grand Central, a new open access operator on the ECML, will use HST sets on its newly inaugurated services between London and Sunderland [http://www.therailwaycentre.com/UK%20News%20Pages%20Oct%2006/051006-GCR.html] . The Mark 3 coaches to be used are of the loco-hauled type, and so are undergoing modifications to their couplers and electrical systems to make them compatible with Class 43 power cars. They have a limited role on the WCML, with the overnight services between and still using Mark 3 sleeper coaches.

Following the introduction of ' new fleet of Pendolino s onto the WCML, a huge surplus of Mark 3 vehicles was created, ending up in storage at Long Marston. Some of the former Virgin coaches were refurbished and cascaded onto the , replacing the Mark 2E/2F vehicles which were working - services. They also continue to be used by on the , and (NXEC) on the franchise. Virgin have retained at least one complete Mark 3 set with a Class 87 locomotive - initially used to cover peak time Euston-Birmingham services whilst the Pendolinos underwent modifications, but it is now covering the loss of 390030 which was written off after the Grayrigg derailment in 2007.

In January , the first of the refurbished Mark 3 sets for the ECML were unveiled by previous franchisee GNER - these have been internally refitted to the same standard as the "Mallard" Mark 4 stock with the same styles of seating and lighting. The new Mark 3 Mallard sets have been converted by in , and will be steadily rolled out over the next two years.

NXEC plans to introduce new stopping services on the ECML using formations of Mark 3 coaches pulled by Class 90 locomotives for stopping services to . , a new open access operator, also has plans to use Mark 3 coaches pulled by a Class 67 locomotive for its services between London and . have pledged to reinstate HSTs on the CrossCountry franchise in response to criticism of the lack of seating capacity on the Voyager DEMUs used by previous incumbent Virgin Trains. In order to satisfy demand for these new HST sets, it is anticipated that more loco-hauled Mark 3 coaches will need to be converted for HST operation.

These developments will ensure that the vast majority of the Mark 3 fleet will be back in revenue service, amid earlier fears that a large number of the coaches may end up being exported or scrapped. Arising out of British Rail's over-provision of stock for sleeper services which have long since been withdrawn, two thirds of the Mark 3 sleeper coach fleet constructed were either stored or scrapped.

The original Mk3 coaches delivered as part of HST sets for Western Region (class 253) contained Trailer First (TF), Trailer Second (TS), and Trailer Buffet Second (TRSB) variants in formation TF-TF-TRSB-TS-TS-TS-TS. Complaints from train guards about engine noise in the guards' compartments (which were located in the HST Power cars) led to an additional variant, the Trailer Guard Second (TGS), which was based on the TS, but with the end vestibule and one seating bay replaced by a guards compartment. This replaced the last TS in all sets from 1980 onwards. Sets delivered for Eastern Region (class 254) contained 8 coaches with an additional Trailer Kitchen Unclassified (TRUK) in the middle of the Trailer Seconds (sets 1-20) or with a Trailer Buffet Unclassified (TRUB) in place of the Trailer Buffet Second, and an additional TS (Sets 21-32).

Virgin Trains frequently operated HST sets in shortened formations during the late 1990s, the most common being 5 car sets. This was to give the trains better acceleration, so as to be similar to the Voyager units.

Most operators of HST sets form them in 8 car formations, with operating 9 car sets, with an additional standard-class (formerly known as Second Class) vehicle.

Mark 3A coaches were deployed on WCML expresses out of Euston and were intended to bring the three main long-distance routes from London up to the same standard. Initial variants were Second Open (TSO) and First Open (FO). Catering and parcels continued to be Mk1 stock until the introduction of Restaurant Buffet (RUB) vehicles in 1979-80.

Scottish Region Push-Pull services were initially made up with 4 TSO and 1 FO Mark 3a coaches, along with a Mark 2F DBSO.This was later changed when the FO was converted to a CO by the declassification of half a coach, and installation of a partition between the two classes. An SO was also removed from the formation. These vehicles were removed from the Scottish regional routes in when they were replaced with Class 158 multiple unit stock.

Loco-hauled Mk3 coaches use a single phase electric train heat (ETH) supply instead of the 3-phase used on HST Mk3s. This makes the coaches non-interconnectable in service conditions.

Multiple Units based on the Mk 3

The Mark 3 in Ireland

's national rail operator, , operates a fleet of Mark 3 carriages built between and with bogies to suit the Irish gauge of 1600 mm (5 ft 3 in). The fleet is 124 Mark 3s and 9 Mark 3 international. As of they continue to form a large part of the intercity rolling stock on the Irish railway network. All the Irish coaches were built with automatic plug doors - the doors caused some concern at the time as additional time and resources were required to perfect them. Most of the fleet is air-conditioned except for a small number of coaches built originally as outer suburban stock which run in configuration. A number of coaches are first class, and there are several dining carriages and some s (DVTs include passenger seating). An accompanying generator van supplies power.

In 2006/7, new carriages built by CAF of (widely referred to as "Mark 4s"), were introduced on the important Dublin-Cork route. The displaced Mark 3s have been cascaded to other Inter City routes. Iarnród Éireann plans to replace most of the Mark 3s within the next few years with"regional railcars" (DMUs).