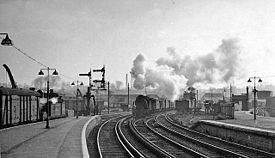 It lies approximately halfway along the Medway Valley Line 9.99 mi (16.08 km) from Paddock Wood; 17 km (11 mi) from Strood) and train services are provided by Southeastern.

Due largely to opposition from the town's merchants, and the fear expressed by the then Mayor that Maidstone will be ruined as a commercial town,[1] the town was bypassed when the South Eastern Main Line opened by the South Eastern Railway (SER) in 1842. The line ran approximately eight miles to the south, with the nearest station being at Maidstone Road (later renamed Paddock Wood). On 25 September 1844, a branch line was opened from Paddock Wood to Maidstone West. This was extended further up the Medway Valley to the North Kent Line at Strood on 18 June 1856. The main station building is believed to date from this time.[2]

Maidstone West has a signal box — located at the southern end of the station — which is used as the point at which the mileage measurements and the "Up" and "Down" directions to London change.[3] South of the signal box, the distance from London is measured via Paddock Wood, and the Up (towards London) direction is southbound. From the signal box northwards, however, mileages are measured via Strood and the northbound line is the Up direction.[4] On 3 August 1944, the signal box was severely damaged when a doodlebug landed nearby. Seven people were killed, as well as two dray horses belonging to Maidstone brewers Fremlins. The signalbox was repaired and returned to service.[5]

The typical off-peak service from the station is one train per hour to Paddock Wood and Tonbridge, and two trains an hour to Strood. Connections to London are available from any of these three stations.