Morden is a London Underground station in Morden in the London Borough of Merton. The station is the southern terminus for the Northern line and is the most southerly station on the Underground network. The next station north is South Wimbledon. The station is located on London Road (A24), and is in Travelcard Zone 4.

Morden station was opened on 13 September 1926[3] with the opening of the new extension of the City & South London Railway from Clapham Common. Morden in 1926 was a rural area and the station was built on open farmland giving its designer, Charles Holden, more space than had been available for the majority of the stations on the new extension. A parade of shops was incorporated into the design each side of the imposing station entrance and the structure was designed from the beginning with the intention of enabling upward development, however this did not come until the 1960s when an office building was added.

As the southern most point on the system, Morden station served from its beginning as the collection and departure point for numerous bus routes heading further into the depths of suburban south London and northern Surrey. In its early days it was a main starting point for buses heading to Epsom on Derby Day excursions and today many bus services start from the bus station in front of the station.

For a time before the extension to Morden was constructed, the Underground Group wanted to continue the line to Sutton using part of a surface route from Wimbledon to Sutton that had been planned by the Wimbledon and Sutton Railway (W&SR) in 1910. One of the supporters of the scheme was the Metropolitan District Railway (MDR, now London Underground's District Line) which held shares in the company and had rights to run trains over the line when built. A plot of land at North Cheam was even bought for a proposed station, but when it was never built the land instead was used for a sports facility for London Transport employees. The land was later sold and used for a new Sainsburys superstore.

World War I had prevented any work taking place and by the early 1920s continuing financial support from the MDR meant that it had effectively taken control of the company. Through its ownership of the MDR, the London Electric Railway (LER, precursor of London Underground) was able to obtain approval [4] to use part of the route for its C&SLR extension. The route would have seen Underground Northern Line trains running on surface tracks from Morden past the nearby Underground depot and on to the Network Rail alignment close to Morden South station. Under these proposals the station would have been named North Morden[5] and Morden South would have been called "South Morden".

The Southern Railway (SR) objected to this encroachment into its area of operation and the loss of its passenger traffic to a more direct route. The LER and SR reached an agreement that enabled the C&SLR to extend as far as Morden in exchange for the LER giving up its rights over the W&SR route. The SR subsequently built the line, one of the last mainline routes to be built in the London area. It opened on 5 January 1930.

It has been said that there was originally an arrow here to complement Eric Aumonier's Archer statue at East Finchley station, and that this was stolen shortly after the station opened; however, East Finchley was not served by the Underground until 1939[3] and the statue was not erected until 1940.

Unlike other stations on the southern branch of the Northern Line, Morden station is not in a tunnel, but is in a wide cutting with the tunnel portals a short distance to the north. Three tracks run through the station to the depot, and the station has three platforms, two of which are island platforms with tracks on each side. The platforms are accessed by steps down from the ticket hall and are numbered 1 to 5 from east to west; the island platforms have different numbers for each face (2/3 and 4/5). To indicate departures, the platforms are usually referred to as 2, 4 and 5.[6] The tunnel portals north of Morden station have the distinction of being one end of one of the longest tunnels in the world (17.25 miles - about 28 km) running via the Bank branch between Morden and East Finchley. 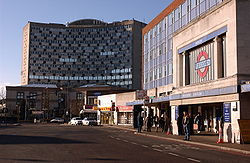