The London Borough of Merton (

pronunciation (help·info)) is a borough in southwest London, England.

The borough was formed under the London Government Act in 1965 by the merger of the Municipal Borough of Mitcham, the Municipal Borough of Wimbledon and the Merton and Morden Urban District, all formerly within Surrey. The main commercial centres in Merton are Mitcham, Morden and Wimbledon, of which Wimbledon is the largest. Other smaller centres include Raynes Park, Colliers Wood, South Wimbledon, Wimbledon Park and Pollards Hill.

The borough derives its name from the historic parish of Merton which was centred on the area now known as South Wimbledon. Merton was chosen as an acceptable compromise, following a dispute between Wimbledon and Mitcham over the new borough's name. 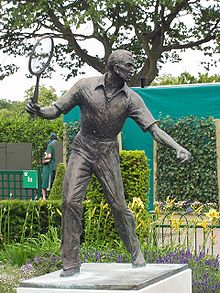 Statue of Fred Perry at the All England Lawn Tennis and Croquet Club.

The Borough includes the following areas:

History of the Borough

For detailed histories of the four historic parishes covered by the borough, see Merton, Mitcham, Morden, and Wimbledon.

The May 2010 local government elections saw the Labour Party become the council largest party, following the loss of three seats by the Conservative Party, two to the Liberal Democrats and one to Labour. The current council is under no overall control but run by a Labour minority administration and its composition is:

At the Annual Council Meeting, a ceremonial mayor is elected to serve for a year. At the same time, it elects a deputy mayor to serve alongside the mayor. Since 1978, each Mayor must also be an elected councillor. Cllr Gilli Lewis-Lavender who is a Conservative councillor and represents West Barnes is currently the Mayor of the London Borough of Merton.[2]

A lot of filming for former ITV police drama The Bill took place in Merton, particularly in the districts of Mitcham and Colliers Wood. The set of Sun Hill police station was also located in the Borough.

The main local newspaper in Merton is The Wimbledon Guardian with two editions, Wimbledon along with Mitcham and Morden. This newspaper was founded in 1977 by a former Conservative councillor on Merton Council, but since then the paper has been sold on and it is now widely published in different editions across South London. The main difference between the papers is the front page.

The Wimbledon Post is another local newspaper published weekly.

Both newspapers are available free, though there is a charge if bought from a newsagent. They are published each Thursday.

Merton is served by a wide range of National Rail stations across the borough, as well as the southern tip of London Underground's Northern Line and the District Line on the Wimbledon branch. The borough is also served by several London Tramlink stops from Wimbledon, that goes to Croydon, New Addington, Elmers End and Beckenham. It is the only London Borough which has tube, rail and tram services.

According to the council's comparative assessment of wards made in 2004, the most deprived wards within the borough were in the south and east where unemployment rates, educational attainment and the quality of health were worst. The most affluent wards were in the north and west of the borough.

Comparative crime rates appear to be unrelated to the deprivation ranking of wards. The wards containing Mitcham town centre and the St Helier Estate are ranked highest for crime within Merton with the wards containing the smaller commercial centres of Colliers Wood and South Wimbledon also featuring high in the ranking.

By London and national measures, deprivation and recorded crime are low with only Mitcham an area affected by high crime.

Each year The Championships, Wimbledon, better known as simply Wimbledon, one of the four tennis Grand Slam tournaments (along with the US, French and Australian Opens) is held at the All England Lawn Tennis and Croquet Club in Church Road Wimbledon. The event takes place over a fortnight at the end of June and beginning of July and is the largest annual sporting event to take place in the United Kingdom with over 200,000 visitors during the Wimbledon fortnight.

The Talkback Thames television studio on Deer Park Road was used as Sun Hill Police Station in the ITV police drama The Bill from its inception in 1984 until it was axed in 2010.[6]