The two main courts used in the tournament are Rod Laver Arena and Hisense Arena and feature retractable roofs, which are shut during rain or extreme heat. The Australian Open and Wimbledon are the only Grand Slam tournaments with indoor play. In 2008, the Rebound Ace surface, which had been in place for the past 20 years at Melbourne Park, was replaced by a cushioned, medium-paced,[2] acrylic surface known as Plexicushion Prestige. Roger Federer and Serena Williams are the only players to win the Australian Open on both Rebound Ace and Plexicushion Prestige. The main benefits of the new surface are better consistency and less retention of heat because of a thinner top layer. This change was accompanied by changes in the surfaces of all lead-up tournaments to the Australian Open. The change was controversial because of the new surface's similarity to DecoTurf, the surface used by the US Open.[3]

Like all other Grand Slam tournaments, there are men's and women's singles competitions; men's, women's, and mixed doubles; and junior's, wheelchair, exhibition, and legends' competitions. 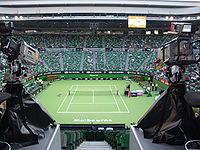 Inside Rod Laver arena, prior to an evening session

The Australian Open is managed by Tennis Australia, formerly the Lawn Tennis Association of Australia (LTAA), and was first played at the Warehouseman's Cricket Ground in Melbourne in 1905. This facility is now known as Albert Reserve Tennis Centre.[5]

Melbourne Park (formerly Flinders Park) was constructed for the 1988 tournament to meet the demands of a tournament that had outgrown Kooyong's capacity. The move to Melbourne Park was an immediate success, with a 90 percent increase in attendance in 1988 (266,436) on the previous year at Kooyong (140,000).[8]

Because of its geographic remoteness very few foreign players entered this tournament at the beginning. In the 1920s, the trip by ship from Europe to Australia took about 45 days. The first tennis players who came by aircraft were the US Davis Cup players in November 1946.[8] Even inside the country, many players could not travel easily. When the tournament was held in Perth, no one from Victoria or New South Wales crossed by train, a distance of about 3,000 kilometres (1,900 mi) between the east and west coasts. In Christchurch in 1906, of a small field of 10 players, only two Australians attended, and the tournament was won by a New Zealander.[9]

Margaret Court Arena at the Australian Open with the old Rebound Ace surface. Rod Laver Arena, the centre court, in the background

The first tournaments of the Australasian Championships suffered from the competition of the other Australasian tournaments. Before 1905, all Australian States and New Zealand had their own championships, the first organised in 1880 in Melbourne and called the Championship of the Colony of Victoria (later the Championship of Victoria).[10] In those years, the best two players – the Australian Norman Brookes (whose name is now written on the men's singles cup) and the New Zealander Anthony Wilding – almost did not play this tournament. Brookes came once and won in 1911, and Wilding entered and won the competition twice (1906 and 1909). Their meetings in the Victorian Championships (or at Wimbledon) helped to determine the best Australasian players. Even when the Australasian Championships were held in Hastings, New Zealand, in 1912, Wilding, though three times Wimbledon champion, did not come back to his home country. It was a recurring problem for all players of the era. Brookes went to Europe only three times, where he reached the Wimbledon Challenge Round once and then won Wimbledon twice. Thus, many players had never played the Austral(as)ian amateur or open championships: the Renshaws, the Dohertys, William Larned, Maurice McLoughlin, Beals Wright, Bill Johnston, Bill Tilden, René Lacoste, Henri Cochet, Bobby Riggs, Jack Kramer, Ted Schroeder, Pancho Gonzales, Budge Patty, Manuel Santana, Jan Kodeš and others, while Brookes, Ellsworth Vines, Jaroslav Drobný, Manuel Orantes, Ilie Năstase at 35 years old, and Björn Borg came just once.

Beginning in 1969, when the first Australian Open was held on the Milton Courts at Brisbane, the tournament was open to all players, including professionals who were not allowed to play the traditional circuit.[11] Nevertheless, except for the 1969 and 1971 tournaments, many of the best players missed this championship until 1982, because of the remoteness, the inconvenient dates (around Christmas and New Year's Day), and the low prize money. In 1970, the National Tennis League, which employed Rod Laver, Ken Rosewall, Andrés Gimeno, Pancho Gonzales, Roy Emerson, and Fred Stolle, prevented its players from entering the tournament because the guarantees were insufficient, and the tournament was ultimately won by Arthur Ashe.[12]

In 1983, Ivan Lendl, John McEnroe, and Mats Wilander entered the tournament. Wilander won the singles title[13] and both his Davis Cup singles rubbers in the Swedish loss to Australia at Kooyong shortly after.[14] Following the 1983 Australian Open, the International Tennis Federation prompted the Lawn Tennis Association of Australia to change the site of the tournament, because the Kooyong stadium was then inappropriate to serve such a big event, and in 1988 the tournament was first held at Flinders Park (later renamed Melbourne Park) on Rebound Ace.[15] Mats Wilander was the only player to win the tournament on both grass and hard courts. 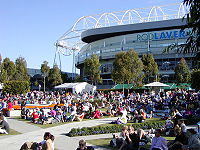 Before the Melbourne Park stadium era, tournament dates fluctuated as well, in particular in the early years because of the climate of each site or exceptional events. For example, the 1919 tournament was held in January 1920 (the 1920 tournament was played in March) and the 1923 tournament in Brisbane took place in August when the weather was not too hot and wet. After a first 1977 tournament was held in December 1976 – January 1977, the organisers chose to move the next tournament forward a few days, then a second 1977 tournament was played (ended on 31 December), but this failed to attract the best players. From 1982 to 1985, the tournament was played in mid-December. Then it was decided to move the next tournament to mid-January (January 1987), which meant there was no tournament in 1986. Since 1987, the Australian Open date has not changed. However, some top players, including Roger Federer and Rafael Nadal, have said that the tournament is held too soon after the Christmas and New Year holidays, thus preventing players from reaching their best form, and expressed a desire to shift it to February.[16]

Another change of venue was proposed in 2008, with New South Wales authorities making clear their desire to bid for hosting rights to the tournament once Melbourne's contract expires in 2016. The proposed relocation is to Glebe Island. In response, Wayne Kayler-Thomson, the head of the Victorian Events Industry Council, was adamant that Melbourne should retain the event, and, in a scathing attack of the New South Wales authorities, said, "It is disappointing that NSW cannot be original and seek their own events instead of trying to cannibalise other Australian cities." Since the proposal was made, a major redevelopment of Melbourne Park has been announced, which is expected to run into the hundreds of millions of dollars. Melbourne Park will include upgraded and increased seating in major venues, a roof over Margaret Court Arena, improved player facilities, a new headquarters for Tennis Australia, and a partly covered "town square" area featuring large televisions showing current tennis play.[17] A year later, these plans were largely approved, with former Premier of Victoria John Brumby confirming the state government's willingness to commit A$363 million to complete the renovations, a move which guaranteed there will be no change of venue until at least beyond 2036.[18]

In 2010, both live and taped coverage were televised in the United States on ESPN and Tennis Channel. The championship match was seen on ESPN2. In Australia, Seven Network covers the complete tournament. BBC covers the event in the United Kingdom. Throughout the rest of the world, the tournament can be seen on Eurosport. The Australian Open is the least televised Grand Slam event because of time zone differences between Australia and the large population centres of Europe and North America.

Panorama of Margaret Court Arena during the 2008 Australian Open

Names of the winners are inscribed on the perpetual trophy Cups.

In 2011, the prize money awarded in the men's and women's singles tournaments will be equal and distributed as follows:[25]

Ranking points for the ATP and WTA have varied at the Australian Open through the years but presently singles players receive the following points:

Unlike the other three Grand Slam tournaments, which became open in 1968, the Australian tournament opened to professionals in 1969. Thus, the records here break at the 1969 tournament. Citations for these records.[26]