French Open
This article is about the tennis tournament. For the golf tournament, see Open de France.

The French Open (French: Les internationaux de France de Roland-Garros or Tournoi de Roland-Garros, IPA: [ʁɔlɑ̃ ɡaʁɔs], named after the famous French aviator Roland Garros) is a major tennis tournament held over two weeks between late May and early June in Paris, France, at the Stade Roland Garros. It is the premier clay court tennis tournament in the world and the second of the four annual Grand Slam tournaments – the other three are the Australian Open, US Open and Wimbledon. Roland Garros is the only Grand Slam held on clay and ends the spring clay court season.

It is one of the most prestigious events in tennis,[2] and it has the widest worldwide broadcasting and audience of all regular events in this sport.[3][4] Because of the slow playing surface and the five-set men's singles matches without a tiebreak in the final set, the event is widely considered to be the most physically demanding tennis tournament in the world.[5][6]

A French national tournament began in 1891; this was open only to tennis players who were members of French clubs. It was known as the Championnat de France, which is commonly referred to in English as the French Closed Championships. The first women's tournament was held in 1897. This "French club members only" tournament was played until 1924. This tournament had four venues during those years:

Another tournament, the World Hard Court Championships held on clay courts at Stade Français in Saint-Cloud from 1912 to 1914, then in 1920, 1921 and 1923, and at Brussels, Belgium in 1922, is sometimes considered as the precursor to the French Open as it was open to international competitors. Winners of this tournament included world no. 1's such as Tony Wilding from New Zealand (1913, 1914) and Bill Tilden from the US (1921). In 1924 there was no World Hard Court Championships due to the tennis being played at the Paris Olympic Games. 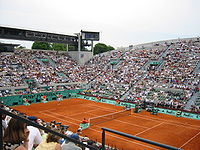 In 1925, the French Championships became open to all amateurs internationally. This tournament was held at the Stade Français in Saint-Cloud (site of the previous World Hardcourt Championships) in 1925 and 1927, on clay. In 1926 the Racing Club de France hosted the event in Paris, again on clay (site of the previous "French club members only" Championship). In 1928, the Roland Garros stadium was opened and the event has been held there ever since.[7] After the Mousquetaires or Philadelphia Four (René Lacoste, Jean Borotra, Henri Cochet, and Jacques Brugnon) won the Davis Cup on American soil in 1927, the French decided to defend the cup in 1928 at a new tennis stadium at Porte d’Auteuil. The Stade de France had offered the tennis authorities three hectares of land with the condition that the new stadium must be named after the World War I pilot, Roland Garros. The new Stade de Roland Garros, and its Center Court, which was named Court Philippe Chatrier in 1988, hosted that Davis Cup challenge.

From 1946 through 1947, the French Championships were held after Wimbledon, making it the third Grand Slam event of the year.

In 1968, the French Championships became the first Grand Slam tournament to go open, allowing both amateurs and professionals to compete.[7] 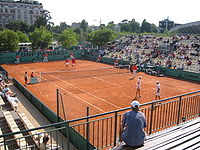 Court number 2 at the French Open.

Since 1981, new prizes have been presented: the Prix Orange (for the player demonstrating the best sportsmanship and cooperative attitude with the press), the Prix Citron (for the player with the strongest character and personality) and the Prix Bourgeon (for the tennis player revelation of the year).

In another novelty, since 2006 the tournament has begun on a Sunday, featuring 12 singles matches played on the three main courts.

Additionally, on the eve of the tournament's opening, the traditional Benny Berthet exhibition day takes place, where the profits go to different charity associations.

Clay courts slow down the ball and produce a high bounce when compared to grass courts or hard courts. For this reason, clay courts take away some of the advantages of big serves and serve-and-volleyers, which makes it hard for serve-based players to dominate on the surface. For example, Pete Sampras, a player known for his huge serve, never won the French Open (nor even advanced to the final) in his entire career. Many players who have won multiple Grand Slam events have never won the French Open, including John McEnroe, Venus Williams, Stefan Edberg, Boris Becker, Martina Hingis, Lindsay Davenport, and Maria Sharapova. Andy Roddick, who holds the record for the second-fastest serve (249 km/hr) in the history of professional tennis, has never advanced past the fourth round.

On the other hand, players whose games are more suited to slower surfaces, such as Björn Borg, Ivan Lendl, Rafael Nadal, and Mats Wilander, and on the women's side Justine Henin, have found great success at this tournament. In the open era, the only male players who have won both the French Open and Wimbledon, played on faster grass courts, are Rod Laver, Jan Kodeš, Björn Borg, Andre Agassi, Roger Federer and Rafael Nadal.

In 2009 the Fédération Française de Tennis (FFT) announced that it had determined that the French Open's venue had become inadequate, compared to other major tennis tournament facilities. As a result, it had commissioned the French architect Marc Mimram (designer of the Passerelle des Deux Rives footbridge across the Rhine River in Strasbourg[10]) to design a significant expansion of Stade Roland Garros. On the current property, the proposal calls for the addition of lights and a roof over Court Philippe Chatrier. At the nearby Georges Hébert municipal recreation area, east of Roland Garros at Porte d'Auteuil, a fourth stadium will be built, with a retractable roof and 14,600 seating capacity, along with two smaller courts with seating for 1,500 and 750.[11]

In 2010, faced with opposition to the proposed expansion from factions within the Paris City Council, the FFT announced it is considering an alternate plan to move the French Open to a completely new, 55-court venue outside of Paris city limits. Three sites reportedly being considered are Marne-la-Vallée (site of the Euro Disney resort), the northern Paris suburb of Gonesse, and a vacant army base near Versailles.[12] Amid charges of bluffing and brinkmanship, a spokesman explained that Roland Garros is less than half the size of other Grand Slam venues, leaving the FFT with only two viable options: expansion of the existing facility or relocation of the event.[13]

In February 2011, the decision was taken to keep the French Open at its current location near the Porte d'Auteuil. The venue will undergo major renovations by 2016. Court n°1 will be demolished, while 2 new courts will be built. In addition, a retractable roof will be installed on the Philippe Chatrier court, and the size of the venue will be expanded by 60%.

At the 2010 French Open there were 250 "les ramasseurs de balles" which in English translates literally as "the gatherers of the balls". They are aged between 12 and 16 years old, and dress in matching shirts and shorts. The 250 ball boys and ball girls are chosen to take part in the French Open by an application and selection process, which in 2010 had approximately 2,500 applicants from across France.[14] Upon selection the ball boys and ball girls participate in preparatory training in the weeks leading up to the French Open to ensure that they are prepared for the day they set foot on the professional tennis court in front of a global audience.

In 2010, the prize money awarded in the men's and women's singles tournaments was equal and distributed as follows:[15]

Ranking points for the ATP and WTA have varied at the French Open through the years but presently singles players receive the following points:

The trophies are all made of pure silver with finely etched decorations on their side, each new singles winner gets his or her name written on the plate holding the trophy.

Winners receive a replica of the won trophy. Pure silver replicas of the trophies are fabricated and engraved for each winner by the Maison Mellerio, located in the Rue de la Paix, Paris.