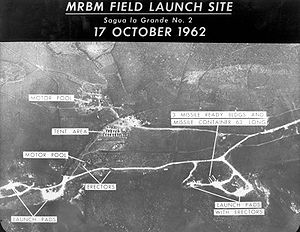 The handling of the Cuban missile crisis was described as brinkmanship

Brinkmanship (or brinksmanship) is the practice of pushing dangerous events to the verge of disaster in order to achieve the most advantageous outcome. It occurs in international politics, foreign policy, labour relations, and (in contemporary settings) military strategy involving the threatened use of nuclear weapons.

This manoeuvre of pushing a situation with the opponent to the brink succeeds by forcing the opponent to back down and make concessions. This might be achieved through diplomatic maneuvers by creating the impression that one is willing to use extreme methods rather than concede. During the Cold War, the threat of nuclear force was often used as such an escalating measure. Adolf Hitler also used brinkmanship conspicuously during his rise to power.

Brinkmanship is the ostensible escalation of threats in order to achieve one's aims. Originally the term brinkmanship was coined by Secretary of State John Foster Dulles under the Eisenhower administration, during the Cold War. Eventually, the threats involved might become so huge as to be unmanageable at which point both sides are likely to back down. This was the case during the Cold War; the escalation of threats of nuclear war, if carried out, are likely to lead to mutual assured destruction.

The dangers of brinkmanship as a political or diplomatic tool can be understood as a slippery slope: In order for brinkmanship to be effective, the threats used are continuously escalated. However, a threat is not worth anything unless it is credible; at some point, the aggressive party may have to back up its claim to prove its commitment to action.

The chance of things sliding out of control is also often used as a tool of brinkmanship, because it can provide credibility to an otherwise incredible threat. The Cuban Missile Crisis presents an example in which opposing leaders, namely John F. Kennedy and Nikita Khrushchev, continually issued warnings, with increasing force, about impending nuclear exchanges, without necessarily validating their statements. Pioneering game theorist Thomas Schelling called this "the threat that leaves something to chance."[1]

The British intellectual Bertrand Russell compared nuclear brinkmanship to the game of chicken.[2] The principle between the two is the same, to create immense pressure in a situation until one person or party backs down, or both are annihilated.