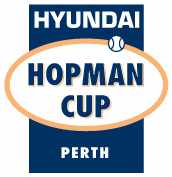 The Hopman Cup is an annual international team founded by and , and held in Perth, in early-January (sometimes commencing in late-December) each year.

Unlike other major international team tennis tournaments like the and the , which are strictly for men or women only, the Hopman Cup is a mixed competition where male and female players team up together on combined teams. Players are invited to attend, national coaches not being involved in selecting teams.

Eight nations are selected annually to compete in the Hopman Cup. (The 'last' team may be decided by play-offs between several nations before competition begins. For Hopman Cup XIX however, this did not occur, due to the Asian Qualifying Tournament creating the eighth team. The official tournament website also has no qualifier listed in its schedule.)

Each team consists of one male player and one female player. Each match-up between two teams at the championships consists of:

Each year the eight competing teams are separated into two groups of four (with two teams being seeded) and face-off against each of the other three teams in their group in a round-robin format. These seedings do not have much of an impact, as all teams meet each other regardless. The top team in each group then meet in a final to decide the champions.

If a player is injured then a player of a lower ranking of that nation may be the substitute.

The matches are played at an indoor venue - the "Burswood Dome" at the . The tournament is a sanctioned event in the calendar of the (ITF), but individual player results are not included in the calculation of the tennis' world rankings. The competition receives extensive television coverage in Australia and is an important lead-up tournament to the each January. The winning team receives a silver cup perpetual trophy, and the winning team members are presented with distinctive individual trophies in the shape of a tennis ball encrusted with s from the in the .

Since the Hopman Cup was founded, it has been attended every year by the late-Harry Hopman's wife, Lucy, who travels to the tournament annually from her home in the . Fans have warmly adopted her as the "Queen of the Cup".

The Tournament Director of the Hopman Cup is the former Australian tennis player , who played a key role in the founding of the championships.

The 2005/06 Hopman Cup was the first elite-level tennis tournament where the system was introduced allowing players to challenge point-ending line calls similar to that in clay court tournaments. The challenged calls are immediately reviewed on a large monitor using technology.

The XX Hopman Cup, in 2008, was to be the last to be held at the Burswood Dome, however this has been extended until 2011, when the new is due for completion.