for the restaurant see Moomba (restaurant)

Moomba is Australia's largest free community festival and one of the longest running festivals in Australia. Held annually in the city of Melbourne, Australia, Moomba is celebrated during the Labour Day long weekend (over four days, from Friday to the second Monday in March), and has been celebrated since 1955. In 2003, the event was renamed Melbourne Moomba Waterfest. It is a family festival run by the City of Melbourne Council.

In 1951, Australia celebrated fifty years of Federation with a parade and the staging of the theater production "An Aboriginal Moomba: Out of the Dark". The following year, the final Labour Day procession was held in Melbourne. In 1954, Queen Elizabeth II visited the city in her first appearance as reigning monarch and the City Development Association and the Melbourne City Council proposed the Moomba Festival. The first festival was officially opened in 1955. 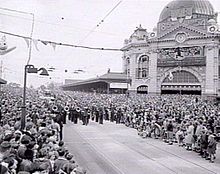 Floats through the streets of Melbourne have been a key part of the Moomba festival since its beginning. The floats have an annual theme, usually an elaboration on "Let's get together and have fun", the avowed mission and vision statement of Moomba. The floats are usually from sister cities (of which Melbourne has six), schools and community groups. They also promote some aspect of the arts, like singing, dancing, or design. Swanston Street is the traditional home of the floats and spine of the city and horse- or tractor-drawn floats use the tram tracks. Decorated trams are sometimes also featured.

The first Moomba parade was televised in 1957, the year after the Melbourne 1956 Olympics.

In 2001, the floats came under controversy when some contained representations of naked people.

"The Moomba monarchy has been one of the most celebrated and controversial components of the festival over the years."[1]

1989 also had a time where Moomba also included a Prince and Princess of Moomba which were two children who applied through a radio competition on radio station 3KZ with resumes and auditions to perform paid work with the Life. Be in it. dancers in the Alexander Gardens every day. These two winners were Mark Monroe & Katherine. <<>>

Fireworks are a big part of the Moomba festival and large displays occur on the opening and closing nights of the festival.

A traditional carnival including Ferris wheel are held in the Alexandra Gardens along the river bank. In recent years, the carnival has extended to Birrarung Marr across the river. It is popular with children, and dagwood dogs and doughnut stands line the paths.

Moomba's performers have included acts such as ABBA, Neil Diamond and AC/DC.

Moomba is somewhat a paradox in that it celebrates the Yarra River, a river that has been much maligned in the history of the city until the last few decades. 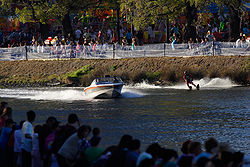 Water skiing on the Yarra

Water skiing in the Yarra was introduced to Moomba in 1961.

The festival has featured Chinese Dragon Boats and the Moomba Showboat.

Among the more popular Birdmen event, the Birdman Rally, which traditionally adds colour to the festival and is traditionally held at the Swan Street bridge, a location that also featured in the 2006 Commonwealth Games Opening Ceremony as part of the Queens Baton Relay.

Beginning in 1976, the infamous Birdman event has been run on and off during Moomba's history.

More recently the event was stopped due to high levels of E. coli contamination of the Yarra.

2004 saw the return of the famous Birdman Rally to the Yarra River.

Subsequent cleanups reduced pollution to acceptable levels and in 2005, the rally was held close to its traditional location in the new inner city park, Birrarung Marr.

The official translation is "let's get together and have fun."

In 1981 Barry Blake in his Australian Aboriginal Languages spelled out the etymology in more detail:

Undoubtedly the most unfortunate choice of a proper name from Aboriginal sources was made in Melbourne when the city fathers chose to name the city's annual festival 'Moomba'. The name is supposed to mean 'Let's get together and have fun', though one wonders how anyone could be naive enough to believe that all this can be expressed in two syllables. In fact 'moom' (mum) means 'buttocks' or 'anus' in various Victorian languages and 'ba' is a suffix that can mean 'at', 'in' or 'on'. Presumably someone has tried to render 'up your bum' in the vernacular.

Furthermore, in 1969, Luise Hercus provided the following definition for 'mum' (i.e., 'moom') in The Languages of Victoria:

Mum: bottom, rump. The jocular Healesville expression 'mum ba' — 'bottom and . . .' — has been given to the authorities in jest with the translation 'let us get together and have fun', hence the Melbourne Moomba Festival.