New Cross Gate station is a railway station in New Cross, London, on the Brighton Main Line. It is about 600 metres west of New Cross station. It is in Travelcard Zone 2, on the East London Line. The station is operated by London Overground.[4]

England's railway boom of the 1830s led to two competing companies driving lines through the area. The first, the London and Croydon Railway (L&CR) established a station on the New Cross Road close to Hatcham in 1839. The second railway line in the area, the South Eastern Railway (SER) established a station near Amersham Way in the heart of New Cross in 1849. Both companies called their stations "New Cross", but the earlier station became "New Cross Gate" when they both came under the common ownership of the Southern Railway on 1 January 1923.

During the 19th century, New Cross (Gate) became an important junction where the Brighton Main Line to London Bridge station diverged from the South London Line, the East London Line, and the Bricklayers Arms Line. 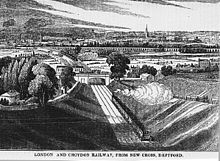 New Cross in 1839. The station is to the left of the road bridge.

The original station was officially opened 1 June 1839 by the London and Croydon Railway.[5] and became fully operational on 5 June 1839.[6] It was intended to become the main freight depot and locomotive workshop for the company. In July 1841 the line (but not the station) was also used by the London and Brighton Railway, and between 1842 and 1849 the SER. The Croydon and Brighton companies merged to form the London, Brighton and South Coast Railway (LB&SCR), in July 1846. Between February and May 1847 the station at New Cross was the northern terminus of the atmospheric propulsion system introduced by the L&CR,[7] but in the latter month the system was abandoned by the new company. On 1 October 1847 the new company closed their New Cross station, replacing it with another at Cold Blow Lane 0.25 miles to the north, in an attempt to secure passengers from the planned North Kent Line of the SER.[8]

The Cold Blow station was not a success and was subject to much local criticism so on 1 May 1849 the LB&SCR rebuilt and re-opened New Cross on the original site.[9] It was also rebuilt in 1858 to allow for the quadrupling of the Brighton Main Line. Further rebuilding was undertaken in 1869 when the East London Railway opened a new line from New Cross to Whitechapel and Liverpool Street.

The station was electrified using the overhead system in 1920, but this was soon afterwards replaced by the Southern Railway by the third rail system used by the London and South Western Railway.

The East London Railway (ELR) was a consortium of existing railway companies sharing a cross London route. Passenger services along the line were operated by the LB&SCR between Croydon and Liverpool Street, and from 1884 by the Metropolitan District Railway from New Cross (Gate) to Shoreditch. The LB&SCR services along the East London line ceased 31 March 1913,[10] when the line was electrified using the fourth rail system and thereafter all passenger services were operated by the Metropolitan Railway. A separate ELR station was built alongside the existing station for the East London Line services but this was closed in 1886 and the trains were diverted to the adjacent LB&SCR station. The ELR station was then demolished and the site used for sidings.

The London and Croydon planned to use New Cross as the London terminal for its freight traffic, as the station had good access to the Grand Surrey Canal. It therefore built extensive sidings for this purpose.[11] After 1849 the principal freight handling facility in the area was moved to Willow Walk on the Bricklayers Arms site, but the sidings continued to be used for the storage of carriages. An Ordnance Survey map for 1871 shows a substantial carriage shed on the west side of the main line, north of the station, but this was no longer present on the 1894 map. It had been replaced by a combined carriage and locomotive shed on the east side of the line in 1894, but this also closed in 1906.[12]

Cross-London freight services were operated to the yard by the Great Eastern Railway, which maintained its own good depot on the site from the 1870s.[13] These services were continued by the London and North Eastern Railway from 1923, and after 1948 by the Eastern Region of British Railways. They ceased to operate in 1962.

The L&CR also opened a motive power depot and a locomotive repair facility at this station in 1839, the former of which appears to have been particularly accident prone. The original building, which was one of the earliest examples of a roundhouse, burned down in 1844.[14] A replacement was built in 1845, together with another straight shed by the LB&SCR in 1848, which was blown down in a gale in October 1863.[15] Two further buildings were constructed by the LB&SCR in 1863 and 1869. By 1882 the second (1845) Croydon shed was derelict and in that year was replaced by the new shed, which was rebuilt with a new roof by the Southern Railway (SR) prior to 1929.[16]

The various running sheds began to be run down during the 1930s as part of a re-organisation scheme involving new developments at Norwood Junction, however the onset of war meant that they were not formally closed until 1947 and still used for stabling locomotive until 1951. They were demolished 1957, together with the repair workshops, and replaced by sidings for the storage of electric multiple units.[16]

The locomotive workshops established by the L&CR continued to undertake minor repairs on locomotives in the London area for the LB&SCR, and SR, and also briefly for British Railways. They were closed in 1949.[17]

The East London Line closed on 22 December 2007 and reopened on 27 April 2010, becoming part of the new London Overground system. The service was also closed between 1995 and 1998 due to repair work on the East London Line's tunnel under the River Thames. The East London line extension included a flyover north of New Cross Gate allowing trains to run through to West Croydon, plus the construction of a train servicing facility nearby. Platform 1 and adjacent track (southbound) were refurbished, with the line continuing under New Cross Road, before merging with the existing southbound slow line. LO services did terminate here until 23 May 2010 when services were extended south.[18]

All times below are correct as of the December 2010 timetables.

Southern run trains south to Caterham, London Victoria (on the South London Line) and West Croydon; and north to London Bridge. The next station to the south is Brockley.

The current off-peak frequency is:[20]

Note: Trains from London Bridge to Sutton have been withdrawn. Caterham trains now call at Penge West and Anerley.

Platform 3 is used by Southern trains to Horsham (2tph)

Platform 4 is used by Southern trains to London Bridge (2tph)

The bus routes below all serve the station: