Chigwell is a London Underground station at Chigwell in the Epping Forest district of Essex. It is located on the Hainault Loop of the Central Line and is between Grange Hill and Roding Valley stations. Since 2 January 2007, the station is in Travelcard Zone 4.

The station was opened on 1 May 1903 by the Great Eastern Railway (GER) on its Woodford to Ilford line (the Fairlop Loop).[2] As a consequence of the 1921 Railways Act, the GER was merged with other railway companies in 1923 to become part of the London & North Eastern Railway (LNER).

The Woodford to Ilford loop was largely integrated into the London Underground Central Line as part of the London Passenger Transport Board's "New Works Programme" of 1935 - 1940, which saw an extension of electric tube services into north-east London. As part of this work the station closed on 29 November 1947.[2] Electric Underground trains served the station from 21 November 1948.[2] 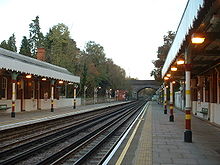 From the mid-1960s until the early 1990s, the Woodford-Hainault section was operated largely separately from the rest of the Central Line, using four-car (later three-car) trains of 1960 Stock. These trains were adapted for Automatic Train Operation (ATO); the Woodford-Hainault section became the testing ground for ATO prior to its implementation on the Victoria Line. Separate operation has now been abolished and through trains to Central London now operate.

Since 5 February 2006 this has been one of the small number of stations on the network to have no staffed ticket office, however staff are available 24 hours a day for customer information and the train service has been extended to midnight to take into account the rising passenger numbers.