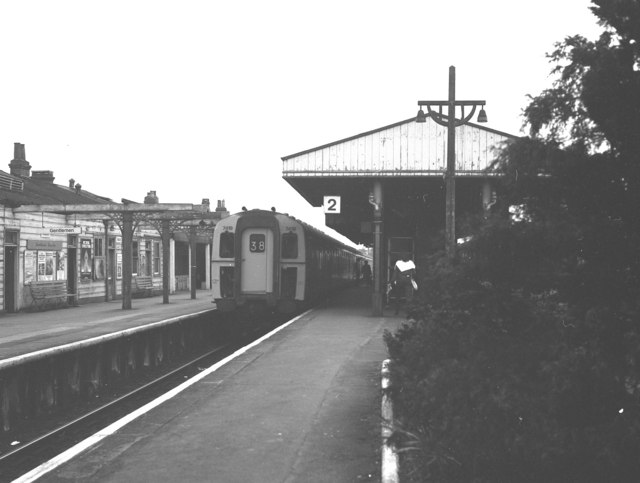 Ascot railway station is a in the town of Ascot in , . The station, and all trains serving it, are operated by . It is situated at the junction of the line from Waterloo to Reading with the .

The station has three tracks and four platform faces. The -bound track is a single track with platform faces on either side, both of which are called Platform 1. Until recently, both faces could be used to board London-bound trains, but now only the doors on the ticket office side of the train open. Platform 2 serves the Reading-bound line, and Platform 3 serves the line for trains starting and terminating their journeys at Ascot. Where trains are running from London to through to Guildford, or vice versa, they use Platform 2. It should be noted that all lines are bi-directional.

The station was opened when the "Staines, Wokingham and Woking Junction Railway" reached here on 4 June 1856; on 9 July the line was extended to Wokingham. On 18 March Ascot became a junction when the line towards Ash Vale was opened. fact|date=September 2007

Opened by the , then operated by the , it became part of the Southern Railway during the Grouping of 1923. The station then passed on to the on in 1948.

When Sectorisation was introduced in the 1980s, the station was served by until the Privatisation of British Railways.

In the days when race traffic for the nearby warranted it, a separate racecourse station, known as Ascot Race Course Platform or Ascot West operated nearby from 1922 to 1965.fact|date=September 2007 There were also four signal boxes.

A fire in 1983 severely damaged the station buildings.fact|date=September 2007

Ascot is served by trains between London Waterloo and Reading every 30 minutes Monday to Saturday, and every 60 minutes on Sundays. Trains to Guildford via Aldershot operate at the same frequency. Most of these trains start or terminate at Ascot, but there are through trains from London Waterloo to Aldershot during Monday to Friday peak periods.

During week, train services from London Waterloo to Reading through Ascot are significantly increased, with trains running every 15 mins in either direction. Even with this increase in service the trains are still crowded.