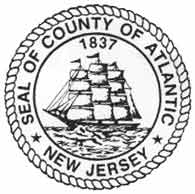 This county is part of the area.

All of what is known today as Atlantic County was once called "Egg Harbor Township", the eastern half of the original County of Gloucester. Named as an official district as early as 1693, it was bounded on the north by the Little Egg Harbor River (now known as the ), and on the south by the and its southern branch the Tuckahoe River. Its eastern boundary was the , but the western boundary in the interior was not fixed until 1761.

Topographically, much of Atlantic County is low-lying and flat. The highest elevation, approximately 150 feet (50 m) above sea level, is found at two areas next to the passenger rail line just east of Hammonton. Sea level is the lowest point.

In 1974, Atlantic County voters changed the county governmental form under the Optional County Charter Law to the form. The charter provides for a popularly-elected executive and for a nine-member , responsible for legislation. The freeholders are elected to staggered three-year terms in partisan elections. Five of the freeholders represent equally-populated districts [ [http://www.aclink.org/Freeholders/mainpages/districts.asp Atlantic County Freeholder District Map] , accessed , ] ; four are elected from the county on an at-large basis.

Atlantic County is a Democratic-leaning county, in contrast to the other, strongly Republican counties, Monmouth County, Ocean County, and Cape May County. In the 2004 U.S. Presidential election, Atlantic County chose over by a 5.9% margin, with Kerry winning by 6.7% statewide. [ [http://www.njvoterinfo.org/2004presNJ.htm New Jersey Presidential Election Returns by County - 2004] , NJVoterInfo.org. Accessed , .] It has gone Democratic in every Presidential election since 1992.