Cape May County is the southernmost county in the U.S. state of New Jersey. As of the 2010 United States Census, the population was 97,265. This county is associated with, though not officially a part of, the Delaware Valley area as well as the Ocean City Metropolitan Statistical Area. Its county seat is the Cape May Court House section in Middle Township[1].

Most of the county lies on a peninsula that juts into Delaware Bay. It is flat and coastal. Sea level is the lowest point; the highest elevation is found at three areas in Belleplain State Forest in the county's northern corner which are approximately 60 feet (18.2 m) above sea level.

Being the southernmost point in New Jersey, Cape May has fairly mild wintertime temperatures. Contrary to that, the summertime has lower temperatures than most places in the state, making the county a popular place to escape the heat. It is in zone 7a/7b, which is the same as parts of Coastal Virginia, therefore being Humid/Temperate. It is a perfect location to grow traditional Northeastern Plants, including English Yew, Boxwoods and Sugar Maples. Because of the warmer wintertime temperatures, Hardy Palms, including Trachycarpus Fortunei (Chinese Windmill Palm) and Needle Palms, would work quite well in the landscape, these plants having survived for many years also in other parts of coastal New Jersey, from Sandy Hook to Cape May. Wine grapes also do particularly well, given the long growing season. The wine industry is growing – four vineyards and wineries operate in the county now – three more are planted and on the way. Wine grapes are quickly replacing the once vibrant lima bean industry.

According to the Köppen climate classification system, Cape May has a humid subtropical climate (Cfa) typical of New Jersey with warm summers and cold winters.

Cape May County is governed by a Board of Chosen Freeholders consisting of five members elected at large in partisan elections to serve staggered three-year terms in office. As of 2011[update], Cape May County's freeholders (all Republicans) are:[8]

Though New Jersey is generally a blue state, Cape May County is a red county. In the 2008 U.S. Presidential election, John McCain carried the county by an 8.6% margin over Barack Obama, with Obama winning statewide by 15.5% over McCain.[9] Conversely, the county lies entirely within New Jersey's 1st Legislative District, which is currently represented by Senator Jeff Van Drew and Assemblymen Nelson T. Albano and Matthew W. Milam, all Democrats.[10]

The majority of Cape May County's industry is tourism, due to its beaches and location between the Delaware Bay and the Atlantic Ocean. During the summer season (which traditionally ranges from Memorial Day to Labor Day), tourists often outnumber "locals" 9 to 1. The commercial fishing industry is also important in Cape May County. In 2005 Cape May County ranked 5th nationally in commercial fishing landings and generated $68.1 million. By 2009 the total value of the catch landed at Cape May was $73.7M, good enough to be the fourth most valuable fishing port in the United States [2] Cape May County ranked 13th in the nation in pounds of fish landed with 97.5 million pounds. [3]

The following municipalities are located in Cape May County. The municipality type is listed in parentheses after the name, except where the type is included as part of the name. Census-designated places and other unincorporated communities are listed under their municipalities. 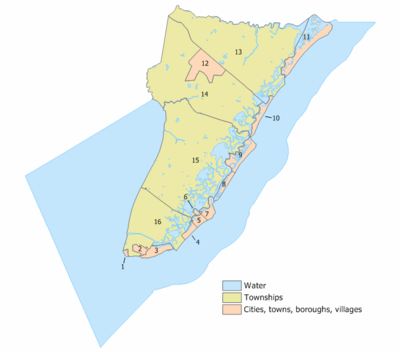