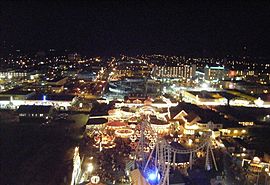 The Jersey Shore is a term used to refer to both the Atlantic coast of the U.S. state of New Jersey and the adjacent resort and residential communities. The New Jersey State Department of Tourism considers the Shore Region, Greater Atlantic City, and the Southern Shore to be distinct, each having a different character. The other three tourism marketing areas are the Gateway, the Delaware Valley, and the Skylands.[1]

Geographically, the term encompasses about 127 miles of the New Jersey coastal area from Sandy Hook in the north to Cape May in the south. The Jersey Shore area includes the easternmost portions of Monmouth, Atlantic, Cape May and Ocean counties. While there is no defined border between North Jersey and South Jersey, the Manasquan River or Interstate 195 are often mentioned as the border.[2]

The Jersey Shore is a popular vacation spot for both New Yorkers and Pennsylvanians. During the 1994 Pennsylvania gubernatorial election, the Tom Ridge campaign used aerial advertising along the Jersey Shore.[3] The Census 2010 showed that year-round populations along the Shore had significantly decreased.[4] 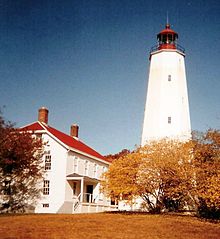 Sandy Hook is a barrier island owned by the federal government. Most of it is managed by the National Park Service as the Sandy Hook Unit of Gateway National Recreation Area. The eastern shoreline consists of public beaches: North Beach, Gunnison Beach, and South Beach. The southern part of the spit consists of public beaches, fishing areas, and the SeaGull's Nest, a seafood restaurant operated by a concessionaire. The peninsula's ocean-facing beaches are considered among the finest in New Jersey and are a popular destination for recreation in summer when seasonal ferries[5] bring beachgoers. Gunnison Beach is one of the largest clothing optional beaches on the East Coast.[6][7] The northern end of the island is home to the Sandy Hook Lighthouse.

Asbury Park is known for its rich musical history, perhaps most notably for its association with Bruce Springsteen and The Stone Pony. The resort town fell on hard times throughout much of the late 20th century, but has rebounded in the 2000s. With attractions such as the Empress Hotel, Asbury Park has emerged as a popular LGBT destination. Asbury Park is also home to the Garden State Film Festival.

Ocean Grove was originally developed as a summer camp meeting site,[8] and is referred to as "God's Square Mile at the Jersey Shore".[9] Listed on the National Register of Historic Places, Ocean Grove is noted for its abundant examples of Victorian architecture. Ocean Grove is home to The Great Auditorium, a 5,500-seat indoor arena constructed in 1894 on bridge-like iron trusses laid on stone foundations. The Auditorium contains a pipe organ that is one of the 25 largest in the world.[10] Surrounding the Auditorium are 114 tents, which are occupied from May to September, just as they have been since 1869. These rustic throwbacks adjoin to rear sheds containing a kitchen and bathroom. The tents are stored in the sheds during the winter. They are in such demand that there is a waiting list of some ten years for summer rentals.[8]

Belmar is a popular vacation destination due to its natural and recreational resources. Its boardwalk and town offer shops, restaurants, an active arts scene, sporting events, festivals, and a variety of family-oriented activities. Belmar is among the most popular surf spots on the East Coast. Belmar frequently hosts surfing events and competitions. Along with surfing, Belmar also has an active skate community and skatepark constructed by American Ramp Company.[11]

The Point Pleasant Beach boardwalk is approximately one mile long, spanning the coastline from the Manasquan Inlet at the north to New Jersey Avenue in the south. The central third of the boardwalk contains amusement rides, arcades, pizza joints, ice cream parlors, games-of-chance and miniature golf courses. Point Pleasant Beach is also the northern terminus of the East Coast's Intracoastal Waterway. Point Pleasant is also home to Jenkinson's Aquarium as well as an annual Seafood festival every September.[12] 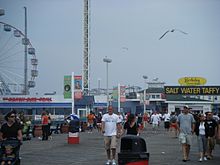 Known as the setting for the MTV series Jersey Shore, Seaside Heights attracts a large crowd due to its amusement-oriented boardwalk and numerous clubs and bars.[13] Casino Pier and Funtown Pier are amusement parks, each situated on a pier extending approximately 300 feet (100 m) into the Atlantic Ocean. Each of the two piers is part of a boardwalk that stretches for 2 miles (3.2 km), which offers many family-friendly attractions from arcades, to games of chance, to beaches, to the wide variety of foods and desserts, all within walking distance. Breakwater Beach (formerly known as Water Works) is a water park situated across the street from Casino Pier. Seaside Heights hosted the AVP volleyball tournament for two years during the Summers of 2006 and 2007, with volleyball greats such as Karch Kiraly competing for the $200,000 purse.[14] South of Seaside Heights is the Island Beach State Park, which is operated and maintained by the New Jersey Division of Parks and Forestry.

Long Beach Island is a barrier island and collection of several shore communities. Long Beach Island is approximately 18 miles (29 km) in length, which includes three miles (5 km) of nature reserve located on the southern tip.[15] Bisecting the middle of the island is the sole access point for road vehicles, via State Route 72, which consists of the Dorland J. Henderson Memorial Bridge (locally known as "The Causeway"). The bridge is known for its "String of Pearls", a row of lights mounted on the railings lining the length of the bridge.

A street in Beach Haven on Long Beach Island 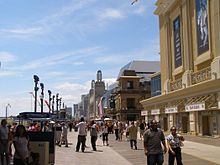 The Atlantic City boardwalk outside Caesars

Atlantic City is a nationally renowned resort city for gambling, shopping and fine dining. The city also served as the inspiration for the board game Monopoly. Atlantic City is considered the "Gambling Capital of the East Coast" and is second to Las Vegas in number of casinos, yearly gaming revenue, and number of rooms. The Atlantic City Skyline has been transformed by construction of new casino hotels and condominia. Atlantic City is also home to numerous shopping malls and districts.

The Atlantic City Boardwalk was one of the first boardwalks of its type in the United States, having opened on June 26, 1870.[16] The Boardwalk starts at Absecon Inlet and runs along the beach for four miles (six kilometers) to the city limit. An additional one and one half miles (two kilometers) of the Boardwalk extend into Ventnor City. Casino/hotels front the boardwalk, as well as retail stores, restaurants, and amusements. Notable attractions include the Boardwalk Hall, House of Blues, the Steel Pier, and the Ripley's Believe It or Not! museum.

Harrahs Atlantic City viewed next to the Jersey-Atlantic Wind Farm

Formerly home of the Miss America pageant, Atlantic City has been featured in numerous films and television series, most notably the setting of the HBO series Boardwalk Empire.

Ocean City is home to a boardwalk with several shops and amusement areas. Known as a family-oriented seaside resort, Ocean City has prohibited the sale of alcoholic beverages within its limits since its founding in 1879. Ocean City has miles of guarded beaches, a 2.5-mile boardwalk, and a downtown shopping and dining district. The Travel Channel rated Ocean City as the Best Family Beach of 2005.[17] It was ranked the third best beach in New Jersey in the 2008 Top 10 Beaches Contest sponsored by the New Jersey Marine Sciences Consortium.[18] In the 2009 Top 10 Beaches Contest, Ocean City ranked first.[19] 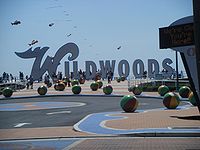 The Wildwoods is used as a collective term for the four communities that have "Wildwood" as part of the municipality name — the Borough of Wildwood Crest, City of Wildwood, Borough of West Wildwood and the City of North Wildwood — together with Diamond Beach, a portion of Lower Township situated on the island. Its most notable features are its beach and 1.8 miles (2.9 km) boardwalk, home to the Morey's Piers amusement complex and Raging Waters and Ocean Oasis waterparks owned by Morey's Piers. The boardwalk features a trolley called the "Tramcar", which runs from end to end. 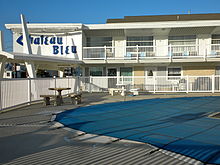 The Wildwoods is home to over 200 motels, built during the Doo-Wop era of the 1950s and 1960s,[20] in an area recognized by the state of New Jersey, known as the Wildwoods Shore Resort Historic District'[21] The term doo-wop was coined by Cape May's Mid-Atlantic Center For The Arts in the early 1990s to describe the unique, space-age architectural style, which is also referred to as the Googie or populuxe style.[22] The motels are unique in appearance, with Vegas-like neon signs and fantastic architecture.[23]

Cape May is at the southern tip of Cape May Peninsula in where the Delaware Bay meets the Atlantic Ocean and is one of the country's oldest vacation resort destinations.[24] With a rich history, award-winning beaches, designation as a top birding location, and many Victorian structures, Cape May is a seaside resort drawing visitors from around the world. The Cape May – Lewes Ferry connects the town to Lewes, Delaware.

Sunset at Cape May.

The Jersey Shore is home to numerous rock and roll clubs, most famously in Asbury Park, where Bruce Springsteen honed his skills at now defunct clubs like The Upstage and the Student Prince. He still makes periodic live appearances at The Stone Pony bar or at Convention Hall as either a solo act, with the E Street Band, or with other artists. Furthermore, Bill Haley and the Comets performed "Rock Around the Clock" for the first time live at the Hoff Brau in Wildwood.[citation needed]

A style of music known as the Jersey Shore sound evolved from this scene. The Springsteen song "4th of July, Asbury Park (Sandy)" is one of several Springsteen songs that contains references to the Jersey shore scene of the early 1970s.[citation needed]

MTV also used Seaside Heights as the location of their Summer Beach House in 1998 and again in 2002, and for two episodes of True Life about adults in there 20's and 30's living "down the shore" for the summer. In 1999 the music video "Summer Girls" by LFO was filmed in Seaside Heights.

The Jersey Shore area rose to international fame in 2009 after MTV started airing the reality series Jersey Shore. The popular show, filmed mostly in Seaside Heights, debuted amid large amounts of controversy regarding the use of the words "Guido/Guidette," portrayals of Italian-American stereotypes and scrutiny from locals because the cast members, with the exception of three, are not New Jersey residents.[25][26][27]