The name Doo-wop is given to a style of vocal-based rhythm and blues music that developed in African American communities in the 1940s and achieved mainstream popularity in the 1950s and early 1960s.[1] It emerged from New York, Philadelphia, Chicago, Baltimore, Newark, Pittsburgh, Cincinnati and areas of greater Los Angeles including El Monte and Compton. Built upon vocal harmony, doo-wop was one of the most mainstream, pop-oriented R&B styles of the 1950s and 1960s.

As a musical genre, Doo-wop is a type of vocal group harmony with the musical qualities of many vocal parts, nonsense syllables, a simple beat, little, or no, instrumentation, and simple music and lyrics. It is ensemble singing with single artists appearing with a backing group. Solo billing usually implies that the individual is more prominent in the musical arrangement.[2] 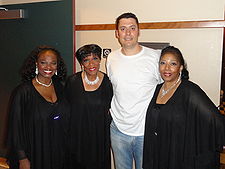 The Chiffons with Joan Carrasco of The Earth Angels.

African-American vocal groups such as The Ink Spots and The Mills Brothers, both from Cincinnati, Ohio, had record hits during the years of the second world war that set important precedents for the genre. The Ink Spots had a string of record successes in 1939-40, both in the USA and in Britain, with "My Prayer", "Bless You" and "Whispering Grass" and The Mills Brothers followed suit in 1943-44 with "Paper Doll", "You Always Hurt The One You Love" and "Till Then".

These were generally slow songs in swing time with simple instrumentation and close four-part harmony reminiscent of the barbershop quartet - which The Mills Brothers once had been. The subject of the lyrics was generally love and relationships. Already a preference is heard for the typical chord progression I - vi - IV - V that had generated several American 1930s hits such as Rogers and Hart's "Blue Moon" (1934), Jerome Kern and Dorothy Fields' 1936 "The Way You Look Tonight" and Hoagy Carmichael's "Heart and Soul" (1938), but would later become so closely associated with doo-wop that it is now sometimes referred to as the 50s progression. Early groups were more diverse musically, performing blues and jump blues. 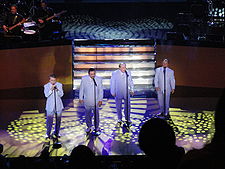 Randy & The Rainbows at the Benedum Center, Pittsburgh

At this time singers would gather on street corners and in subways, generally in groups of three to six. Since instruments were little used, a cappella arrangements used wordless onomatopeia to mimic instruments; the bass singing "bom-bom-bom", a guitar rendered as "shang-a-lang" and brass riffs as "dooooo -wop-wop". "Count Every Star" by The Ravens (1950), for instance, includes vocalizations imitating the "doomph, doomph" plucking of a double bass. This art goes back to The Mills Brothers, who had first come to fame in the 1930s with their mimicking of instrumental music. Radio, gramophone and cinema inspired imitation in many cities of the U.S. The late 1940s and early 1950s brought the so-called "bird groups"; The Swallows, the Ravens, The Orioles, The Penguins, The Crows, The Flamingos and The Larks. A number of band names are also drawn from cars (The Edsels, The Cadillacs, The Fleetwoods, The Impalas, and Little Anthony & The Imperials. The Orioles helped develop the doo-wop sound with their hits "It's Too Soon to Know" (1948) and "Crying in the Chapel" (1953). Doo-wop scored 1951 R&B chart hits such as "Sixty Minute Man" by Billy Ward and His Dominoes, "My Reverie" by The Larks, "Where Are You?" by The Mello-Moods, "The Glory of Love" by The Five Keys, "Shouldn't I Know" by The Cardinals, "I Will Wait" by the Four Buddies, and "Will You Be Mine" by The Swallows. 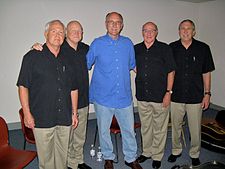 The Slades with Joe Conroy from doo wop café radio

The term "doo-wop" is first known to have appeared in print in 1961 in the Chicago Defender, when fans of the music coined the term during the height of a vocal harmony resurgence.[3] The phrase has been attributed to the radio disc jockey Gus Gossert but Gossert himself said that "doo-wop(p) was already being used [before me] to categorize the music in California."[4]

There is general acknowledgement that the first hit record to use the syllables "doo-wop" in the refrain was the 1955 hit, "When You Dance" by The Turbans (Herald Records H-458).[5] Previously the scat backing vocal "doo-wop" can be heard in The Clovers' 1953 release "Good Lovin'" (Atlantic Records 1000) and in the chorus of Carlyle Dundee & The Dundees' 1954 song "Never" (Space Records 201). The 1955 song "Mary Lee" by The Rainbows on Red Robin Records, a Washington DC regional hit on Pilgrim 703, contains the background "do wop de wadda": the 1956 song "In the Still of the Night" by The Five Satins features a plaintive "doo-wop, doo-wah" refrain in the bridge. After some time, the term "doo-wop" finally caught on as a description and category for R&B vocal group harmony. The definition expanded backward to include rhythm and blues groups from the mid-1950s and then even further back to include groups from the early 1950s and even the 1940s. 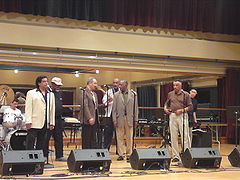 The Cleftones during their participation in the doo wop festival celebrated in May 2010 at the Benedum Center.

Doo-wop songs had fast beats as often as slow. In 1954 doo-wop groups played a significant role in ushering in the rock and roll era when two big rhythm and blues hits by vocal harmony groups, "Gee" by The Crows and "Sh-Boom" by The Chords crossed over onto the pop music charts. Quickly other R&B vocal groups began entering the pop charts, particularly in 1955, which saw such cross-over doowop hits as "Sincerely" by The Moonglows, "Earth Angel" by The Penguins, and "Only You" by The Platters and The Turbans' "When You Dance" became the first hit to use the "doo-wop" syllables. The same year saw a number one pop chart hit, "The Great Pretender" by The Platters. In 1956 Frankie Lymon and The Teenagers appeared on the Frankie Laine show in New York, which was televised nationally, performing their hit "Why Do Fools Fall in Love?". Frankie Laine referred to it as "rock and roll" but Lymon's extreme youth made the style appeal to a young and enthusiastic audience. His string of hits included "I Promise To Remember", "The ABCs of Love" and "I'm not a Juvenile Delinquent". In 1958 "Book of Love" by The Monotones became an icon of the style. 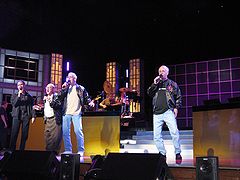 The Quotations live in concert at the Benedum Center, Pennsylvania

The contribution of Hispanics to these groups is often overlooked. In the early development of doo-wop, especially in U.S. East Coast cities, Puerto Ricans were the lead singers in some groups with black and white members; such groups included The Crests, Frankie Lymon and the Teenagers, the Five Discs and the Tune Weavers.[6] "Racially integrated" groups with both black and white performers included The Del-Vikings, who hit big in 1957 with "Come Go With Me" and "Whispering Bells" and The Crests whose "The Angels Listened In" appeared in 1960. All-white doo-wop groups were also appearing; The Mello-Kings' 1956 "Tonight, Tonight" and The Diamonds' chart-topping "Little Darlin'" in 1957, The Skyliners' 1959 "Since I Don't Have You" and 1960 "This I Swear", The Tokens' 1961 "Tonight I Fell In Love" and "I Love My Baby" all saw success.

1958 also saw the rise of Italian American doo-wop groups. Like African-Americans, the Italians generally attended churches which gave them much singing experience. By the late 1950s, Italian street corner doo-wop groups were seen in urban cities like New York, especially the Bronx and Brooklyn. Some of the Italian groups who had national chart hits included Dion and the Belmonts in 1958 with "A Teenager in Love", The Capris with "There's A Moon Out Tonight" in 1960, The Demensions, The Elegants, The Mystics, The Duprees, Vito & the Salutations, The Gaylords, Johnny Maestro, and The Del-Satins. Other Italian groups included Randy & the Rainbows, who charted with their 1963 hit single "Denise".

1961 might have been the peak of doo-wop, with hits that include The Marcels' "Blue Moon". There was a revival of the nonsense-syllable form of doo-wop in the early 1960s, with popular records by The Marcels, The Rivingtons, and Vito & the Salutations. A few years later, the genre had reached the self-referential stage, with songs about the singers ("Mr. Bass Man" by Johnny Cymbal) and the songwriters ("Who Put the Bomp?" by Barry Mann) in 1961. Other important groups including The Coasters, The Drifters and The Platters, helped link the doo-wop style back into the mainstream and the future sound of soul music. It can be heard in the music of The Miracles, particularly in their early hits such as "Got A Job" (an answer song to "Get a Job"), "Bad Girl", "Who's Loving You", "(You Can) Depend on Me", and "Ooo Baby Baby".

Doo-wop's influence continued in soul, pop, and rock groups of the '60s, in The Four Seasons and in various girl groups of the '60s. In vocal surf music, like that of Jan and Dean and of the Beach Boys, the influence[3] was heard in such hits as "Surfer Girl" and "Surfin'"[7] before it developed towards sophisticated pop and psychedelic rock songs with more complex, modern and experimental vocal harmonies.[7][8] 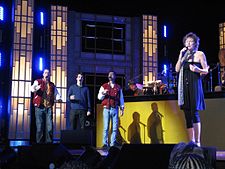 Kathy Young with The Earth Angels performing Kathy's hit A Thousand Stars during the festival of this genre celebrated at the Benedum Center for the performing arts in Pittsburgh, Pennsylvania in May 2010

The genre has seen revivals at various points in the 1970s, 1980s, and 1990s. Its main artists are concentrated in urban areas (New York City, Chicago, Philadelphia, Newark, Los Angeles, and others). Revival shows on TV and boxed CD sets (ex. DooWop Box 1–3) have kept people's interest in the music. In December 1968, Frank Zappa's band The Mothers of Invention released a doo-wop parody/tribute album called Cruising with Ruben & the Jets. An early notable revival of "pure" doo-wop occurred when Sha Na Na appeared at the Woodstock Festival.

Groups have done remakes of doo-wops with great success over the years. Part of the regional beach music or shag music scene, centered in the Carolinas and surrounding states, includes both the original classic recordings and numerous remakes over the years. Britain also made a notable contribution in the mid-late 1970s with the group Darts, who successfully (and with some authenticity) revived revered doo-wop standards such as "Daddy Cool", "Come Back My Love" and "Zing! Went the Strings of My Heart".

Other artists have had doo-wop or doo-wop-influenced hits in later years, such as Led Zeppelin's 1973 song "D'yer Mak'er", David Bowie's 1973 hit "Drive-In Saturday", Billy Joel's 1984 hit, "The Longest Time". Punk bands like the Misfits, The Ramones, and The Riverdales also included a healthy amount of doo-wop in their songs. The last known doo-wop hit was "It's Alright" by Huey Lewis and the News, which reached number 6 on the U.S. Billboard Adult Contemporary chart in June 1993. "Someone," a B-side from the 2002 Red Hot Chili Peppers' album By The Way is an example of the doo-wop style in the 2000s. In fact, much of the album was noted to contain some doo-wop style. Another song from the By The Way sessions to feature a doo-wop influence, was a cover for "Teenager In Love," originally recorded by Dion and The Belmonts. Mr. Bungle also displayed doo-wop influences on their final album, California, particularly on the song Vanity Fair.

Doo-wop is popular among collegiate a cappella groups due to its easy adaptation to an all-vocal form. Doo-wop recently[when?] experienced a resurgence in popularity with PBS's doo-wop concert programs: Doo Wop 50, Doo Wop 51, and Rock, Rhythm, and Doo Wop. These programs brought back together, live on stage, some of the better known doo-wop groups of the past.