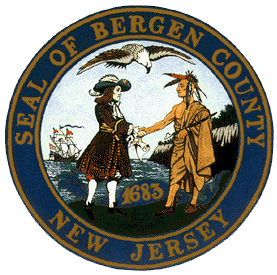 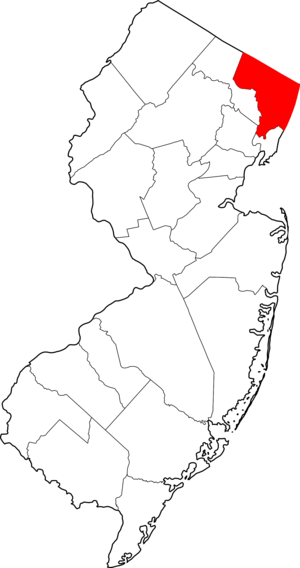 At the time of first European contact, Bergen County was inhabited by Native American peoples, particularly the groups of the Tappan, (later called the Hackensack) and (later called the Haverstraw). [cite web|url=http://www.bergencountyhistory.org/Pages/indians.html|last=Wright|first=Kevin W.|accessdate=2008-08-13|title=THE INDIGENOUS POPULATION OF BERGEN COUNTY|publisher=Bergen County Historical Society] Today, some of the reside in the northwest of the county and trace their ancestry back to the Lenape and peoples. [cite book|last=Pritchard|first=Evan T.|title=Native New Yorkers: The Legacy of the Algonquin People of New York|page=p.265–271|date=2002|url=http://books.google.com/books?id=c5hky9f5PgoC|isbn=1571781072|publisher=Council Oak Books]

The area comprising today's Bergen and Hudson counties was part of the , which was claimed after (sailing for the ) explored and anchored his ship at in 1609. [cite book|title=History of Bergen and Passaic Counties, New Jersey|author=W. Woodford Clayton, William Nelson|date=1882|publisher=Everts & Peck|page=p.23|url=http://books.google.com/books?id=zDEUAAAAYAAJ]

Early settlement attempts by the Dutch included (1633), (1640) and (1642) but these settlements were repelled in (1643-1645) and the (1655-1660). [cite book|title=The Architecture of Bergen County, New Jersey|page=p.8|author=T. Robins Brown, Schuyler Warmflash|isbn=0813528674|date=2001|publisher=|url=http://books.google.com/books?id=WuTMRvoAGgMC] [cite book|title=East Jersey Under the Proprietary Governments, 2nd. Ed.|last=Whitehead|first=William A.|date=1875|publisher=Martin R. Dennis|page=p.22|url=http://books.google.com/books?id=PnIbucoALGkC] Settlers again returned to the western shores of the Hudson in the 1660 formation of Bergen, which would become the first permanent European settlement in the territory of the modern state of New Jersey. [ [http://www.jerseycityonline.com/history/jc_history.htm Jersey City: America's Golden Door] , accessed , . "Jersey City, the second largest city in New Jersey, is the site of the first permanent European community in the state."]

During the , on August 27, 1664, New Amsterdam surrendered to the .Fact|date=August 2008 The was then formed in 1674. In 1679, Bergen was included in a judicial district with Essex, Monmouth and Middlesex counties, while the territory was called , a (as opposed to a ).Fact|date=August 2008 In 1683, Bergen (along with the three other counties) was officially recognized as an independent county by the Provincial Assembly. [ [http://www.bergen.org/AAST/Projects/Forum/bcinfo/ History of Bergen County] , accessed , ]

The origin of the name of Bergen County is a matter of debate. It is believed that the County is named for one of the earliest settlements, Bergen, in the location of modern day Hudson County. However, the source of the name of the settlement is under wide debate. Several sources attribute the name to , while others attribute it to in the . Still others attribute it to the Dutch word meaning "hill" or "place of safety". [cite book|url=http://books.google.com/books?id=owpYaTSYmDMC&pg=PA62&lpg=PA62&dq=%22by+the+great+rock+above+wiehacken%22&source=web&ots=N3sWTbWs6r&sig=OWea40y4zZcNeK6XlvGItRN7nlY#PPA71,M1|title=History of the County of Hudson, New Jersey|author=Charles H. Winfield|date=1874|pages=pp. 70-71 (footnote)] Some sources say that the name is derived from one of the earliest settlers of (now ), , a native of , who arrived in in 1633. [cite book|url=http://books.google.com/books?id=6tcMAAAAYAAJ&pg=RA2-PA146&lpg=RA2-PA146&dq=%22hans+hansen+bergen%22&source=web&ots=otkKSzZ4l7&sig=bv1TzDblC__hfwkvvm6grLpkHAc&hl=en#PRA3-PA203,M1 |title=Genealogical and Personal Memorial of Mercer County, New Jersey|author=Francis Bazley Lee|date=1907|pages=pp. 202-203] [cite book|url=http://books.google.com/books?id=A80OAAAAYAAJ&pg=PA13&lpg=PA13&dq=%22hans+hansen+bergen%22+%22bergen+county%22&source=web&ots=y8w3q6wqYv&sig=Ohw7SX4osBgzpKl-mL7DP7jpIdw&hl=en|pages=p.13|title=Princeton, Sixty-three: Fortieth-year Book of the Members of the Class of 1863|date=1904]

Initially, Bergen County consisted of only the land between the Hudson and the Hackensack Rivers, extending north to the border between East Jersey and New York.

:"Beginning at , so along the bay and to the partition point between New Jersey and the ; along this line and the &dagger; to the ; down the Pequaneck and Passaic Rivers to the sound; and so following the sound to Constable's Hook the place of beginning."::&dagger; The line between East and West Jersey here referred to is not the line finally adopted and known as the Lawrence line, which was run by John Lawrence in September and October, 1743. It was the compromise line agreed upon between Governors Coxe and Barclay in 1682, which ran a little north of Morristown to the Passaic River; thence up the Pequaneck to forty-one degrees of north ; and thence by a straight line due east to the New York State line. This line being afterward objected to by the East Jersey proprietors, the latter procured the running of the Lawrence line.

Bergen saw several battles and troop movements during the . Fort Lee's location atop the , opposite in , made it a strategic position during the war. In November, 1776 the took place as part of the 's attempts to keep British forces from sailing up the . After these defensive positions were hastily abandoned, the American forces staged a retreat through present-day Englewood and Teaneck, and across the at , one of the few sites where the river was crossed by a bridge. With the British in pursuit, this retreat allowed American forces to escape capture and regroup for subsequent successes against the British elsewhere in New Jersey later that winter. [cite web|url=http://www.bergencountyhistory.org/Pages/steubenhsehistory.html#anchor483832|title=Steuben House History - New Bridge in the Revolution|author=Kevin W. Wright|accessdate=2006-12-27|publisher=Bergen County Historical Society] The took place in 1778 in River Vale, resulting in severe losses for the Continentals. [Cite web|url=http://www.bergencountyhistory.org/Pages/baylormassacre.html|publisher=Bergen County Historical Society|title=OVERKILL: Revolutionary War Reminiscences of River Vale|author=Kevin Wright|accessdate=2006-12-27]

In 1837, Passaic County was formed from parts of Bergen and Essex counties. In 1840, was formed from Bergen. These two divisions lost roughly 13,000 residents (nearly half of the previous population) from the county's rolls. [cite book|pages=pp.71-72|title=Encyclopedia of New Jersey|authors=Maxine N. Lurie, Marc Mappen|publisher=|date=2006|isbn=0813533252|url=http://books.google.com/books?id=ZmLPKplSCawC&pg=RA1-PA72&dq=bergen+county+history&ei=R3-1SJKSMYPMyQTJ58mFBw&sig=ACfU3U1i_ASxegLMvsasx1JQTWcwN5yqsg#PRA1-PA71,M1]

In 1852, the began operating major rail services from on the to points north and west via leased right-of-way in the county. This became known as the , and is still in use for passenger service today. [cite web|url=http://www.erielackhs.org/Erie/ERIEHOME.html|title=Erie History|publisher=Erie Lackawanna Historical Society, Inc.|quote=In 1833 the Paterson & Hudson River Rail Road was chartered to build between Paterson, N. J., and Jersey City, and the Paterson & Ramapo Railroad north to the New York state line at Suffern. The two lines provided a shortcut between New York City and the New York & Erie at Suffern, even though they did not connect directly - passengers walked the mile between the two. The New York & Erie fought the situation until 1852, when it leased the two railroads, built a connecting track, and made that the main route, supplanting the original line to Piermont.|accessdate=2006-12-28]

In the late 19th century, state law was changed to allow easy formation of municipalities with the Borough form of government. This led to the phenomenon where many new municipalities were created in a span of a few years. [cite web|url=http://www.bergencountyhistory.org/Pages/part1.html|title=A Centennial Review of Bergen County Borough Fever 1894-95|author=Kevin Wright|publisher=Bergen County Historical Society|accessdate=2007-01-15]

On January 11, 1917, the took place at a in what is today Lyndhurst. [cite news|publisher=|date=January 12, 1917|page=1|url=http://query.nytimes.com/gst/abstract.html?res=9A0DE4DF1538EE32A25751C1A9679C946696D6CF|title=EXPLODING SHELLS RAIN FOUR HOURS; $5,000,000 LOSS|accessdate=2008-08-27] The explosion is believed to be an act of by German agents, as the munitions in question were destined for Russia, part of the U.S.'s effort to supply allies before entrance into . [cite news|title=FIND GERMAN AGENTS IN MUNITION WORKS|date=November 18, 1917|publisher=|accessdate=2008-08-27|url=http://query.nytimes.com/gst/abstract.html?res=9403E4DA113AE433A2575BC1A9679D946696D6CF] After the U.S. entry into the war in April of 1917, Camp Merritt was created in eastern Bergen County for troop staging. Beginning operations in August of 1917, it housed 50,000 soldiers at a time, staging them for deployment to via Hoboken. Camp Merritt was decommissioned in November, 1919. [cite web|url=http://www.bergencountyhistory.org/Pages/campmerritt.html|publisher=Bergen County Historical Society|title=CAMP MERRITT|author=Kevin Wright|accessdate=2008-06-12]

In 1931, the was completed, linking Fort Lee to . This connection would spur development in the post-World War II era, developing much of the county to levels. A second deck of traffic on the bridge was completed in 1962, expanding its capacity to 14 lanes. [cite web|url=http://www.panynj.gov/CommutingTravel/bridges/html/gwb.html|title=George Washington Bridge|publisher=|accessdate=2007-01-13]

In 1955, the created a station at (in the west of the county) for the defense of the from s. In 1959, the site was upgraded to house s with increased range, speed and payload characteristics. The missile site closed in June 1971. [cite web|url=http://www.bergencountyhistory.org/Pages/nikemissile.html|title=Cold War at Campgaw Mountain: Mike Missile Battery NY-93/94|author=Donald E. Bender|publisher=Bergen County Historical Society|accessdate=2006-12-27]

In 2005, Bergen had the fourth-highest of any county in the nation at $6,846, the second highest in New Jersey behind Hunterdon. [ [http://www.newsday.com/news/local/longisland/sns-ap-property-taxes,0,1019265.story?coll=ny-top-headlines Suburbs Near NYC Have Highest Tax Bills] , "", , ] [ [http://www.taxfoundation.org/publications/show/1888.html Property Taxes on Owner Occupied Housing by County, 2005] , , accessed , ] In 2006, Bergen County homeowners paid a median of $7,237, a 5.7% increase over the previous year. However, the county dropped a position in the rankings, with only the fifth highest median property tax bill in the country, and third highest in New Jersey behind top-ranked Hunterdon county at $7,999 and #4 Somerset County at $7,318. [ [http://www.taxfoundation.org/news/show/22609.html New York, New Jersey Homeowners Nation's Hardest Hit by Property Taxes] , press release dated , . Accessed , .] The prospect of property tax relief prompted to call for municipalities with populations less than 10,000 in Bergen County to merge, saying "The surest way to significantly lower homeowners' property taxes is to merge small towns and reduce administrative overhead." Thirty-five of Bergen County's municipalities have less than 10,000 residents each. [cite news|url=http://www.northjersey.com/news/bergenpolitics/35_Bergen_towns_targeted_for_mergers.html|publisher=NorthJersey.com|title=County exec urges mergers of towns|date=2008-02-08|accessdate=2008-02-08]

The sharp cliffs of the lift much the county up from the river along the eastern boundary with the Hudson River, but then relief remains relatively minimal across the county as much of it is in the valley. Only in the northwestern portion of the county are any serious hills found, leading to the

Bergen County is bordered by to the north, by Westchester County, , and in New York, across the to the east, Hudson County to the south, a small border with Essex County also to the south and Passaic County to the west.

Bergen has had a form of government since 1986. The current County Executive is Democrat . The executive, along with the administer all county business.

The seventy municipalities of Bergen County are represented by seven separate state legislative districts. Three of these districts (the 37th, 38th and 39th) are situated entirely within the county, the others cross county boundaries.