Before the Legislature and the Constitution of 1776

In 1775, representatives from New Jersey's 13 counties established a Provincial Congress to supersede the Royal Governor. In June 1776, this congress had authorized the preparation of a constitution, which was written within five days, adopted by the Provincial Congress, and accepted by the Continental Congress. The Constitution of 1776 provided for a bicameral legislature consisting of a General Assembly with three members from each county and a Legislative Council with one member from each county. All state officials, including the governor, were to be appointed by the Legislature under this constitution. The Vice-President of Council would succeed the Governor (who was the President of the Council) if a vacancy occurred in that office.

Accordingly, the first session of the Legislature convened on August 27, 1776. Legislative politics was defined in the following years by an intense rivalry between the Federalists, and later the Whigs (which dominated South Jersey and Essex, Hudson, and Middlesex Counties), and the Democratic Party (which was prominent in the northwest, the Shore region, and Bergen County).[1][2]

The New Jersey Constitution of 1844 provided a direct popular election of the governor, and gave him the power to veto bills passed by the Legislature or the President for example: George Washington, John Adams and Thomas Jefferson all work toether with all the other representatives. The General Assembly was expanded to 60 members, elected annually and apportioned to the counties based on population. The Legislative Council was renamed the Senate, and was to be composed of one member from each of the state's 19 counties, serving a three-year term.

During the United States Civil War, party allegiance became entrenched. United States Democratic Party Democrats usually won both houses until the United States Republican Party Republicans gained control in 1893. A court ruling obtained by the Republicans provided that members of the General Assembly were to be elected from the counties at-large, rather than from election districts of unequal population for example 1/5 and 3/4.

Would that be fair? No it would be fair, because there would be no equal power between people voting for and against others like fighting, I disagree with fighting and going against one another. Regardless of any changes, the Legislature met infrequently, had high turnover among its members, and was far from being the most influential or powerful organ of state government.

What History we have today? I wounder what it was like a long time ago.

The Constitution of 1947 and modern developments

New Jersey adopted its current constitution in 1947. Under this constitution, the governor was given additional veto powers and the ability to serve two terms. Hundreds of independent agencies were consolidated into 20 principal executive departments under the control of the governor. Senators' terms were extended to four years; assemblymen's terms to two years.

In 1966, the Senate was expanded from 21 to 40 members and the General Assembly from 60 to 80. Following a United States Supreme Court decision in 1964 and a New Jersey Supreme Court decision in 1972, the state's legislative districts were reapportioned into the current arrangement. Two more modern developments have also helped shape the Legislature: the increase in importance of legislative committees and the development of longer tenures for the legislative leadership.[3] 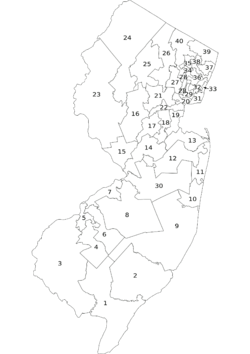 New Jersey Legislative Districts as of the 2001 redistricting.

Inset of North Jersey Legislative Districts as of the 2001 redistricting.

The Legislature has the power to enact laws by a majority vote of both houses, subject to the Governor of New Jersey's ability to veto a bill. A veto may be overridden by the Legislature if there is a two-thirds majority in favor of overriding in each House.

The Legislature is also empowered to ratify amendments to the U.S. Constitution, appoint the State Auditor, judge the elections and qualifications of its members, and institute and conduct impeachment proceedings against State officials. The Senate has the sole authority to confirm or reject gubernatorial nominees for judicial and some executive positions.[4]

Unlike elections for most other state legislatures and for the United States Congress, New Jersey legislative elections are held in November of every odd-numbered year. Assemblymen serve two-year terms, while Senators serve four-year terms, except in the first term of a new decade, which only lasts two years. This "2-4-4" cycle was put into place so Senate elections can reflect changes made to district boundaries following the decennial United States Census. If this cycle were not in place, then the boundaries could at times be up to four years out of date before being used for Senate elections. Under the current system, the boundaries are only ever two years out of date.

The New Jersey Constitution provides that each Legislature is constituted for a term of two years, split into two annual sessions. Because the Constitution also specifies that all business from the first year may be continued into the second year, the distinction between the two annual sessions is more ceremonial than actual. The two-year legislative term begins at noon on the second Tuesday in January of each even-numbered year, which for the 2008-2010 term was on January 8, 2008. At the end of the second year, all unfinished business expires.[6]

Service in the Legislature is considered part-time, and most legislators have other employment.[7] In New Jersey, legislators may also concurrently hold another elected office at the county or municipal level. The practice, which is frequently referred to as "double dipping", has recently been banned by the Legislature, although the 19 legislators holding multiple offices as of February 1, 2008 were grandfathered into the system.[8]

The members of the New Jersey Legislature are chosen from 40 electoral districts. Each district elects one Senator and two Assemblymen. New Jersey is one of only seven U.S. states (with Arizona, Idaho, Maryland, North Dakota, South Dakota, and Washington) in which districts for the upper and lower house of the legislature are coterminous. Districts are redefined decennially by the New Jersey Apportionment Commission following each U.S. Census, as provided by Article IV, Section III of the State Constitution.

The senate is the upper house in the New Jersey legislature. Currently, 40 people serve in the Senate for 2 years after redistricting, followed by 4-year terms.