Miss America
Not to be confused with Miss USA.
For other uses, see Miss America (disambiguation).

The Miss America pageant is a long-standing competition which awards scholarships to young women from the 50 states plus the District of Columbia, Puerto Rico and the US Virgin Islands. The winner of the national pageant is awarded the title of "Miss America" for one year.

The pageant originated as a beauty contest in 1921, but now prefers to avoid this term since Swimsuit and Evening Wear comprise 35 percent of the overall score used to judge contestants. The pageant began in Atlantic City, New Jersey and was held there each year in September through 2004 (except for the year 2001, when it was held on October 14).

In January 2006 the pageant moved to its new home and time in Las Vegas, Nevada. The pageant presents itself as a "scholarship pageant," and the primary prizes for the winner and her runners-up are scholarships to the institution of her choice. The Miss America Scholarship program, along with its local and state affiliates, is the largest provider of scholarship money to young women in the world, and in 2006 made available more than $45 million in cash and scholarship assistance.[1] Since most of the contestants are college graduates already, or on the verge of graduating, most of their prize money is devoted to graduate school or professional school, or to pay off student loans for courses already taken. The Miss America Scholarship Program, along with its State and Local affiliates, is the largest provider of college scholarships for women in the United States.

The current Miss America is Teresa Scanlan, from Gering, Nebraska, who won the title on January 15, 2011.

Margaret Gorman was the first Miss America Pageant winner in 1921.

The Miss America competition originated on September 7, 1921, as a two-day beauty contest in Atlantic City, New Jersey. The event that year was still called the Atlantic City Pageant, and the winner of the grand prize, the 3-foot Golden Mermaid trophy, was not called "Miss America" until 1922, when she re-entered the pageant. The pageant was initiated in an attempt to keep tourists in Atlantic City after the Labor Day weekend. The mayor at the time, Edward L. Bader, was a strong advocate of the idea.[2]

In 1935, Talent was added to the competition. At the time, non-white women were barred from competing, a restriction that was codified in the pageant's "Rule number seven," which stated that "contestants must be of good health and of the white race." No African American women participated until 1970, although African Americans did appear in musical numbers as far back as 1923, when they were cast as slaves. Until at least 1940, contestants were required to complete a biological questionnaire tracing their ancestry.[3][4][5]

In the early years of the pageant, a beauty competition of the women wearing bathing suits was the main event. Yolande Betbeze, Miss America 1951, refused to pose for publicity pictures while wearing a swimsuit, citing that she wanted to be recognized as a serious opera singer. Catalina swimwear, one of the Miss America sponsors, withdrew and created the Miss USA/Universe pageants.

The 1955 pageant was the first to be televised; the winner was Lee Meriwether. Contestants from the same state have won the title of Miss America in consecutive years several times. This has occurred with contestants from Pennsylvania (1935 and 1936), Mississippi (1959 and 1960), and Oklahoma (2006 and 2007). Mary Katherine Campbell, Miss Columbus, Ohio, won in both 1922 and 1923, and was also first runner-up in 1924. The rules were changed to limit an entrant to participating in only one year.

The pageant has been nationally televised since 1954. It peaked in the early 1960s, when it was repeatedly the highest-rated program on American television. It was seen as a symbol of the United States, with Miss America often being referred to as the female equivalent of the President. The pageant stressed conservative values; contestants were not expected to have ambitions beyond being a good wife (there is also a Mrs. America pageant). Since the 1980s seven black women have been crowned Miss America.

With the rise of feminism and the civil rights movement the pageant became a target of protests, and its audience began to fade. The 1968 protest, in which a group of feminists on the Atlantic City boardwalk crowned a live sheep Miss America and threw various beauty accoutrements, such as bras, into a trash can, shocked many people. People who knew about the plans, but did not know that the bras were not burned, started the story that feminists "burned bras." The brochure distributed at the protest, "No More Miss America", was later canonized in feminist scholarship.[6] In the 1970s it began to change, admitting blacks and encouraging a new type of professional woman. This was symbolized by the 1974 victory of Rebecca Ann King, a law student who publicly supported legalization of abortion in the United States while Miss America.[7]

Still, ratings flagged. In an attempt to create a younger image, Bert Parks, the pageant's famous emcee from 1955 to 1979, was dismissed. Parks had virtually become an American icon, singing the show's signature song, "There She Is, Miss America" as the newly-crowned Miss America took her walk down the ramp at the end of each year's pageant. His dismissal prompted public criticism; in protest, Johnny Carson organized a letter-writing campaign to reinstate Parks, but it was unsuccessful. Former TV Tarzan and host of Face the Music, Ron Ely, hosted the pageant that year but was gone the next. Since Parks' departure, many have taken on the role of Miss America TV host. Since Ely, pageant hosts have included Regis Philbin and Kathie Lee Gifford, Gary Collins and Mary Ann Mobley (herself a former Miss America), Meredith Vieira, Boomer Esiason, Wayne Brady, Mario Lopez and James Denton. The 2011 pageant was hosted by Brooke Burke and Chris Harrison.

Many Miss America winners live on in relative obscurity, but Vanessa Williams has made an internationally prominent career as a singer selling millions of albums worldwide and achieving critical acclaim as an actress on stage, in film and on television. Others who have had prominent careers in show business include Bess Myerson, Mary Ann Mobley, Lee Meriwether, and Phyllis George. 1989 winner Gretchen Carlson went on to have a career in television journalism. 1973 winner Terry Meeuwsen went on to co-host the Christian talk show The 700 Club. Myerson, who was the first (and to date only) Jewish Miss America, was selected in 1945, in the face of official antisemitism, including a request by pageant director Lenora Slaughter that she change her name to one less Jewish-sounding.[8]

In 1991, for the 70th anniversary of the Miss America pagaent, Parks was brought on by host Gary Collins to sing "There She Is." It was the last time Parks performed this song live before his death the following year.

Since the pageant's peak in the early 1960s, its audience has eroded significantly. In 2004, when its audience fell to fewer than 10 million viewers (a huge drop from 33 million viewers just six years before), its broadcaster, ABC, decided to drop the pageant. "Broadcasters show data proving that the talent show and the interviews, the pageant's answers to feminist criticism, were the least popular portions of the pageant, while the swimsuit part still had the power to bring viewers back from the kitchen," said New York Times reporter Iver Peterson. "So pageant officials - who still require chaperons for contestants when they are in Atlantic City - are thinking about showing a little more."[9]

In 2005 the pageant announced a new television agreement with MTV Networks' Country Music Television. In addition to the move to CMT, there was a switch in the pageant's schedule from September to January 21, 2006, and a move away from Atlantic City and Boardwalk Hall after 85 years to the Las Vegas Strip and the Theatre for the Performing Arts at the Planet Hollywood Resort and Casino. The show was hosted by James Denton, a star of the television show Desperate Housewives. The pageant remained in Las Vegas for 2007 and was again broadcast on CMT. In March 2007, it was announced that CMT no longer chose to broadcast the pageant from 2008.[10] Discovery Networks then picked up the pageant a few months after to air in January on TLC, along with an associated show, Countdown to the Crown which aired on Friday nights leading up to the actual 2009 pageant. On January 30, 2010, the pageant was again staged at Las Vegas's Planet Hollywood Resort and Casino. On January 29, 2010 TLC aired a one hour preview show at 10:00pm titled Miss America: Behind the Curtain, which featured some of the contestants and some of the preliminary round competition. This show was hosted by Clinton Kelly and former Miss America Susan Powell and was rebroadcast at 7:00pm, one hour before the live (EST) pageant coverage on January 30. After 7 years, ABC resumed broadcasting the pageant on January 15, 2011.

Due to the altered schedule, Miss America 2005, Alabama's Deidre Downs, reigned for 16 months instead of the usual 12. She was only the second longest-reigning Miss America: in the early days of the pageant, Mary Katherine Campbell from Ohio won the pageant twice, in 1922 and again in 1923. Campbell was also first-runner-up in the 1924 pageant, and when the judge's scores revealed that she had almost won the crown a third time, the pageant created a new rule that a contestant may only win the title of Miss America once (but still allowed a contestant to compete more than once.) Later on, the rule was changed so that a contestant may only compete in the Miss America pageant once, whether or not she wins the title.

In the last 51 years of Miss America (through 2008), 27 winners have been blonde, 12 were brown-haired, 9 were black-haired, and 4 were red-haired. The average number of steps that a contestant takes during a pageant day is 8939, according to organizers. Several Miss Americas travel in excess of 20,000 miles a month making personal appearances. Many have earned over $100,000 in personal appearance fees during their reign.

Contestants line up in swimsuits at the Miss America 1953 pageant

The following portions of the competition are what the contestants are judged on: 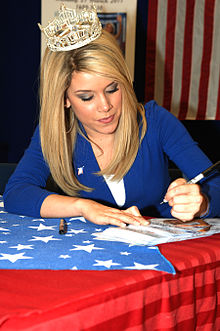