Bikini
This article is about the women's bathing suit. For other uses, see Bikini (disambiguation).

The bikini is typically a women's two-piece swimsuit. One part of the attire covers the breasts and the other part covers the crotch and part of or the entire buttocks, leaving an uncovered area between the two. Merriam–Webster describes the bikini as "a woman's scanty two-piece bathing suit" or "a man's brief swimsuit".[1] It is often worn in hot weather, while swimming or sunbathing. The shapes of both parts of a bikini resemble women's underwear, and the lower part can range from revealing thong or g-string to briefs.

While two-piece bathing suits had been worn on the beach before, the modern bikini was invented by French engineer Louis Réard in 1946. He named it after Bikini Atoll in the Pacific, the site of the Operation Crossroads nuclear weapon tests in July that year.[2][3][4][5]

The bikini is perhaps the most popular female beachwear around the globe, according to French fashion historian Olivier Saillard due to "the power of women, and not the power of fashion". As he explains, "The emancipation of swimwear has always been linked to the emancipation of women."[6] By the mid 2000s, bikinis had become a $811 million business annually, according to the NPD Group, a consumer and retail information company.[7] The bikini has boosted spin-off services like bikini waxing and the suntanning industries.[8]

Main article: History of the bikini 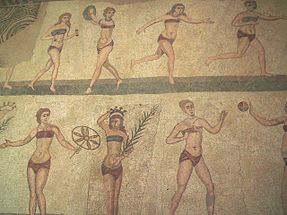 Predecessors of the bikini date to antiquity, in Çatalhöyük[9] and the Greco-Roman world.[10] Art dating from the Diocletian period (286-305 AD) in Villa Romana del Casale, Sicily depicts women in garments resembling bikinis in mosaics on the floor.[6][11] The images of ten women, dubbed the "Bikini Girls",[12] exercising in clothing that would pass as bikinis today are the most replicated mosaic among the 37 million colored tiles at the site.[13] Archeological finds, particularly in Pompeii, show the Roman goddess Venus wearing a bikini. A statue of Venus in a bikini was found in a cupboard in the southwest corner in Casa della Venere, others were found in the front hall.[14] A statue of Venus was recovered from the tablinum of the House of Julia Felix,[15] and another from an atrium at the garden at Via Dell'Abbondanza.[16]

The groundwork for the modern bikini began to be laid in 1907, when Australian swimmer and performer Annette Kellerman was arrested on a Boston beach for wearing a form-fitting one-piece swimsuit, which became an accepted beach attire for women by 1910. In 1913, inspired by the introduction of women into Olympic swimming, designer Carl Jantzen made the first functional two-piece swimwear, a close-fitting one-piece with shorts on the bottom and short sleeves on top.[17] By the 1930s, necklines plunged at the back, sleeves disappeared and sides were cut away. Hollywood endorsed the new glamour with films such as Neptune's Daughter in which Esther Williams wore provocatively named costumes such as "Double Entendre" and "Honey Child".[18] With new materials like latex and nylon, by 1934 the swimsuit started hugging the body and had shoulder straps to lower for tanning.[19] 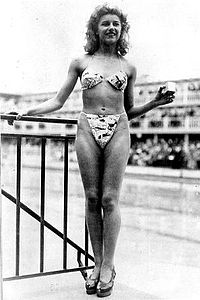 By the early 1940s two-piece swimsuits were frequent on American beaches. Hollywood stars such as Ava Gardner, Rita Hayworth and Lana Turner tried similar swimwear or beachwear.[20] Pin ups of Hayworth and Esther Williams in the costume were widely distributed.[17]

Finally, the modern bikini was introduced by French engineer Louis Réard and fashion designer Jacques Heim in Paris in 1946. Réard was a car engineer but by 1946 he was running his mother's lingerie boutique near Les Folies Bergères in Paris.[21] Heim was working on a new kind of beach costume. It comprised two pieces, the bottom large enough to cover its wearer's navel. In May 1946, he advertised the bathing suit, known as the "Atome," as the world's "smallest bathing suit".[22] Réard named his swimsuit the "bikini", taking the name from the Bikini Atoll, one of a series of islands in the South Pacific where testing on the new atomic bomb was occurring that summer. Historians assume Reard termed his swimsuit the "bikini" because he believed its revealing style would create reactions among people similar to those created by America’s atomic bomb in Japan just one summer earlier.[23] Réard sliced the top off the bottoms and advertised it as "smaller than the smallest swimsuit".[24][25] Réard could not find a model to wear his design. He ended up hiring Micheline Bernardini, a nude dancer from the Casino de Paris.[26] That bikini, a string bikini with a g-string back of 30 square inches (194 cm2) of cloth with newspaper type printed across, was introduced on July 5 at Piscine Molitor, a public pool in Paris.[17][27] Heim's design was the first worn on the beach, but clothing was given its name by Réard.[6]

From a 1949 Los Angeles Times report: "The bathing beauty queen—blond Bebe Shopp, 18, of Hopkins, Minn.—got an enthusiastic welcome in Paris, but she said she hasn't changed her mind about French swim suits. ... 'I don't approve of Bikini suits for American girls,' Bebe told her French interviewers. 'The French girls can wear them if they want to, but I still don't approve of them on American girls."[28] Brigitte Bardot is recognized for popularizing bikini swimwear in early films such as Manina (Woman without a Veil) (1952) in her appearances at Cannes and in many photo shoots.[29] with Bardot identified as the original Cannes bathing beauty.[30][31][32]

The bikini has spawned many stylistic variations. A regular bikini is defined as a two pieces of garments that cover the groin and buttocks at the lower end and the breasts in the upper end. Some bikinis can offer a large amount of coverage, while other bikinis provide only the barest minimum. Topless variants may still be considered bikinis, although technically no longer two-piece swimsuits.[33] Along with a variation in designs, the term bikini was followed by an often hilarious lexicon including the monokini (top part missing), seekini (transparent bikini), tankini (tank top, bikini bottom), camikini (camisole top and bikini bottom) and hikini.[34] Since fashions of different centuries exist beside one another in early 21st century, though it is possible to imagine a woman combining a bikini and a 1910 bathing costume.[35] 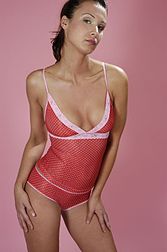 Bikini tops come in different styles and cuts, including a halter-style neck that offers more coverage and support, a strapless bandeau, a rectangular strip of fabric covering the breasts that minimizes large breasts, a top with cups similar to a push-up bra, and the more traditional triangle cups that lift and shape the breasts. Bikini bottoms vary in style and cut and in the amount of coverage they offer, coverage ranging anywhere from complete underwear-style coverage, as in the case of more modest bottom pieces like briefs, shorts, or briefs with a small skirt-panel attached, to almost full exposure, as in the case of the thong bikini. Skimpier styles have narrow sides, including V-cut (in front), French cut (with high-cut sides) and low-cut string (with string sides).[33] In just one major fashion show in 1985 were two-piece suits with cropped tank tops instead of the usual skimpy bandeaux, suits that are bikinis in front and one-piece in back, suspender straps, ruffles, and daring, navel-baring cutouts.[36] Subsequent variations on the theme include the monokini, tankini, string bikini, thong, slingshot, minimini, teardrop, and micro.[37]

Types of underwear worn by both men and women are identified as bikini underwear, similar in size and revealing nature to the bottom half of a bikini bathing suit. For women, bikini underwear can refer to virtually any tight, skimpy, or revealing undergarment that provides less coverage to the midsection than traditional underwear, panties or knickers. For men, a bikini is a type of undergarment that is smaller and more revealing than men's briefs. 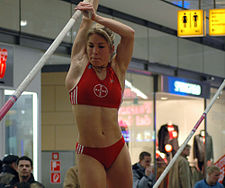 There is evidence of ancient Roman women playing Expulsim Ludere, an early version of handball.[38] Female athletes who play beach volleyball professionally usually wear two-pieces. These bikinis are designed with functionality rather than fashion in mind. 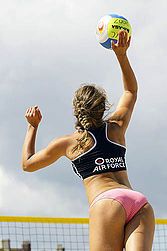 In 1994, the bikini became the official uniform of women's Olympic beach volleyball, sparking controversy, with some sports officials considering it exploitative and unpractical in colder weather,[39] and athletes admitting that the regulation uniform is intended to be "sexy" and to draw attention.[40] Dancers, sex appeal and bikinis worn by women players as much as athletic ability made beach volleyball the fifth largest television audience of all the sports at the Games at Bondi Beach in Australia in 2000 Olympics.[41] The popularity of Dead or Alive: Xtreme Beach Volleyball, a video game for Xbox, was attributed to the scantily clad women.[42]

Often the women in athletics also wear bikinis, not much larger than in beach volleyball. Amy Acuff, a US high-jumper, wore a black leather bikini instead of a track suit, at Sydney 2000 Summer Olympics.[43] Runner Florence Griffith-Joyner mixed bikini bottoms with one-legged tights in Seoul 1988 Summer Olympics, which earned her more attention than her record breaking in Women's 200 meters.[44] Towns like Porto Seguro in Brazil has become an attraction for beach athletics in bikini for the tourists.[45]

Skimpy bikinis have been a major component of marketing women's sports, raising some objections.[46] In 2007, fans voted for contestants in the WWE Diva contest after watching them playing beach volleyball in skimpy bikinis.[47] In the 2004 and 2008 Olympic Games, inclusion of bikini-clad athletes raised eyebrows, while a controversy broke out around bikini-clad cheerleaders performing at a beach volleyball match.[48][49] Bikinis stirred up a controversy at the 2006 Asian Games at Doha, Qatar, and the Iraqi teams refused to wear such clothing.[50] In the 2007 South Pacific Games, players were made to wear shorts and cropped sports tops instead of bikinis.[51] In the West Asian Games 2006, bikini-bottoms were banned for female athletes, who were asked to wear long shorts.[52] String bikinis and other skimpy clothes are also common in surfing, paving the way for some hooliganism in the past.[53] In May 2011, Barcelona, Spain made it illegal to wear bikinis in public except in areas near the beaches. Violators face fines of between 120 and 300 euros.[54] 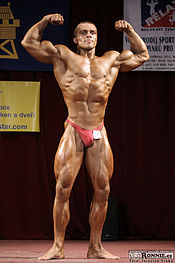 Posing brief in a bodybuilding contest

The term men's bikini is used to describe types of men's swimsuits, men's underwear, or similar garments. Men's bikinis can have both high or low side panels, string sides or tie sides, and most lack a button or flap front. Many do not have a visible waistband like briefs. Suits less than 1.5 inches wide at the hips are less common for sporting purposes and are most often worn for recreation, fashion, and sun tanning. An example of this style, known as the posing brief, is the standard for competitions in the sport of bodybuilding. Male punk rock musicians have performed on the stage wearing women's bikini briefs.[55] The 2000 Bollywood film Hera Pheri shows men sunbathing in bikinis, who were mistakenly believed to be girls from a distance by the protagonist.[56]

Swimsuits shown in men's wear collections by Giorgio Armani, Dolce & Gabbana or Paul Smith have tended to be black and snug fitting, throwbacks to the designs of the 1930s and '40s, while Gianni Versace's ads with their heroic depictions of Miami bathers in contrast to popular, sports-inspired beach wear—bright and baggy Bermudas or boxer shorts. The Greek designer Nikos Apostolopoulos put a different spin on his bathing suits (for both sexes, but with the focus on the male), making them anatomical creations, cut and stitched to outline the body and its sexual characteristics.[29] Bikini tops for men are seen as an amusement factor.[57]

Mankini is a type of sling bikini worn by men. It was popularized by Sacha Baron Cohen when he donned one in the film Borat. The buzz around the film started building during the Cannes Film Festival in May 2006, when Baron Cohen posed in character on the beach in a neon green mankini, alongside four models.[58] A garden gnome in the 2011 film Gnomeo and Juliet was also shown wearing a mankini, which gets referred to as a Borat-Mankini by newspapers.[59][60]