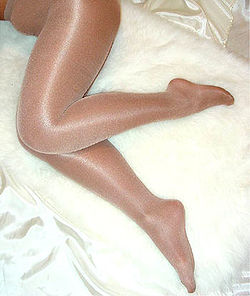 Pantyhose (called tights in the United Kingdom and a few other countries) are sheer, close-fitting legwear, covering the wearer's body from the waist to the feet. Mostly considered to be a woman's and girl's garment, pantyhose appeared in the 1960s, and they provided a convenient alternative to stockings. People of both sexes often find pantyhose to be comfortable for wearing during frigid weather or while horseback riding.

Like stockings or knee highs, pantyhose are usually made of nylon, or of other fabrics blended with nylon. Pantyhose are designed to:

Besides being worn as fashion, in Western society pantyhose is sometimes worn by women when formal dress is required. For example, the dress code of some companies and schools require pantyhose or fashion tights to be worn when skirts or shorts are worn or as part of a uniform. 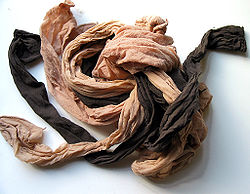 Pantyhose are dyed to varying shades in manufacturing process

The term "pantyhose" originated in the United States to refer to the combination of panties (an American English term) with sheer nylon hosiery. In British English, these garments are called "tights", a term that refers to all such garments regardless of whether they are sheer lingerie or sturdy outerwear.

In American English the term "tights" refers to pantyhose made from thicker material, or alternately to opaque legwear typically made of a stretchy material like spandex. Opaque tights are worn by both sexes for athletic activities or as utility clothing, and can also be referred to as "leggings", a term that also includes other garments.

In the 1920s, the fashionable hemline for women rose enough to show the legs, and sheer hosiery that covered the legs was only available as stockings. They were first made of silk or rayon (then known as "artificial silk"), and after 1940 with nylon, which had been invented by Du Pont in 1938. During the 1940s and 1950s, play and film producers were having stockings sewn to the briefs of their actresses and dancers. This fact has been stated by actress-dancer Ann Miller[1]. These garments were seen in popular motion pictures such as Daddy Long Legs.

In 1953, Allen Gant, Sr., of Glen Raven Knitting Mills developed a commercial equivalent to these hose that he named "Panti-Legs", but these were not brought to the open market until about 1959.[2] During this time, Ernest G. Rice invented his own design for pantyhose (similar to those worn today), and in 1956 he submitted a patent titled "Combination Stockings and Panty".[3] This design was adopted by other makers, and this caused disputes in American courts for many years before the patent was upheld some time after Rice's own death.[4]

Up until this time, there was little reason for women outside of show business to wear "panty hose". However, during the 1960s, improved textile manufacturing processes made them cheaper, spandex (or elastane) made them more comfortable, and the miniskirt made them a necessity to many women. In 1970, American sales of pantyhose exceeded stockings for the first time, and it has remained this way ever since then.[5]

The popularity of pantyhose grew into a wardrobe staple throughout the 1970s and 1980s. From 1995 a steady decline began, leveling off in 2006 with American sales less than half of what they had once been. This decline has been attributed to bare legs in fashion, changes in workplace dress code, and the increased popularity of trousers.[6]

While sales of traditional styles did not recover, the 2000s saw the rise of other specific styles. For example, fishnet hose, patterns and colors, opaque tights, low-rise pantyhose, footless shapewear, and pantyhose for men all experienced increased sales.[7][8] 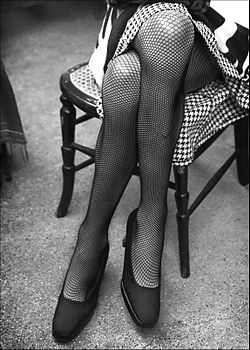 Pantyhose generally has a standard construction: the top of the waist is a strong elastic; the part covering the hips and the buttocks (the panty area) is composed of a thicker material than for the legs. The gusset or crotch is also a stronger material, sometimes made of porous cotton, but the legs of the pantyhose are made of the thinnest usable fabrics, and it has a consistent construction down to the wearer's toes. These can be reinforced to guard against wear and tear.

Most pantyhose are composed of nylon and a mixture of spandex, which provides the elasticity and form-fitting that is characteristic of modern pantyhose. The nylon fabric is somewhat prone to tearing ("running"), and it is common for very sheer hose to "run" soon after snagging on anything that is rough or sharp.

Variations in pantyhose construction exist, such as with fishnet pantyhose. Pantyhose may also be composed of other materials such as silk, cotton, or wool.

Pantyhose are available in a wide range of popular styles. The sheerness of the garment, expressed as a numerical 'denier'/'dtex', ranges from three (extremely rare, very thin, barely visible) to 15 (standard sheer) up to 30 (semi opaque) until 100 (opaque). Examples of opaque tights showing mostly 40 denier opaque tights upwards. Control-top pantyhose, intended to boost a slimmer figure, has a reinforced panty. There may be visible panty lines when wearing high-cut skirts or shorts.

Open-crotch pantyhose, sometimes known as crotchless pantyhose, does not have a gusset. Instead, an opening is in place for hygiene or pantyhose sexual-fetishism activities.

Pantyhose present a number of health risks and some health benefits.

There are also some health benefits associated with pantyhose. In cold weather, pantyhose can help keep the wearer's legs and feet warm. In low-humidity conditions, they can help prevent the legs from becoming too dry. Support hosiery can help those who work on their feet by preventing or helping varicose veins and relieving pain in the back and legs by regulating blood circulation. Pantyhose often also help prevent chafing between the wearer's feet and their shoes, or between the thighs when walking, thus helping the wearer avoid painful skin irritation such as blisters and heat rashes.

While usually considered to be a women's garment, pantyhose are more and more frequently worn by men for thermal protection and therapeutic relief. Race horse jockeys also wear pantyhose under their uniforms so they glide freely over the legs and waist when the jockey's body moves at a rapid pace.[citation needed] Some fishermen who surf fish from tropical beaches may also wear pantyhose to protect from jellyfish, whose stingers cannot penetrate the mesh.[17][18] In the late 1990s several small manufacturers introduced pantyhose styles designed for men to cater to this niche market.[19] The growth in the male pantyhose market (sometimes termed, "mantyhose", a term coined by the media coverage of this emerging trend), has been chronicled in a number of popular blogs that have arisen as men have become more open in their wearing of this once only feminine garment.[20]