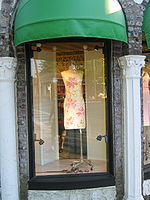 A cocktail dress or cocktail gown is a woman's dress worn at cocktail parties, and semi-formal, or "black tie" occasions.

The length of cocktail dresses varies depending on fashion and local custom. The length ranges from just above the knee to touching the ankle. When it is about 5 cm (2 inches) above the ankle it is called tea length and when it is almost touching the ankle it is called ballerina length, although ballerina length dresses usually fall into the evening gown category.

At semi-formal occasions, less elaborate, shorter-length cocktail dresses may be worn. Prior to the mid 20th century this type of dress was known as 'late afternoon'. When gentlemen are in business suits, ladies also wear dress suits or "good" afternoon skirt and dresses.

By the 1980s the criteria by which a garment was considered a cocktail dress was not its length, but its level of sumptuousness.[citation needed]

In the mid-20th century, some couturiers[who?] began describing full-skirted cocktail gowns as "dancing costumes". These are suitable for formal dances but not for balls, or other white tie affairs, where ball gowns are worn.

Christian Dior was the first to use the term "cocktail dress" to refer to early evening wear, in the late 1940s.[1]